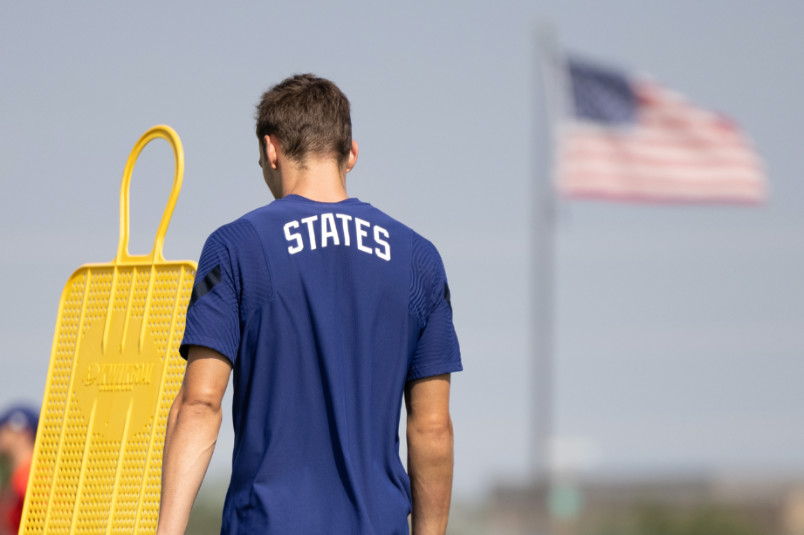 By Jason Davis – WASHINGTON, DC (Jul 28, 2021) US Soccer Players – The US Women’s and Men’s National Teams are a world apart. This is true geographically, with the USWNT currently at the Tokyo Olympics and the USMNT at the Gold Cup, and metaphorically. The women went to Japan carrying expectations of winning an important tournament. The men entered this edition of the Gold Cup largely focused on learning a little more about a young group of players. For one, nothing but domination is good enough. For the other, it’s about taking steps.

While there is always context to the results on the field and smart fans know that a single game in isolation doesn’t tell the whole story, this week has been a study in divergent narratives.

The USWNT closed out the group stage of the Olympic tournament with a dire goalless draw against Australia on Tuesday. The point was enough to ensure that both nations advanced to the quarterfinal round, a fact that likely played a significant part in the proceedings.

Neither team had much reason to expend energy. The Americans rarely pressed, a feature of the game pointed out by Australia head coach and former USMNT assistant Tony Gustavsson. By the end of the game, the Matildas’ backline passed the ball between themselves, any impetus for either side to change the scoreline long gone.

Coming as it did after two group stage games that did little to indicate this version of the USWNT can reach the heights of 2019, head coach Vlatko Andonovski is taking heat back at home. For his part, Andonovski put a positive spin on the draw against Australia, saying afterward that his players had executed the plan to tee.

“I would say it was actually a good opportunity for me to see whether the team is ready to take on the information that was given and execute it, which I was very happy with,” Andonovski said. “Almost every player on the team had a specific role, and they executed it very good.”

If it was just winning that mattered, Andonovski’s spin might not be all that upsetting to the fan base. The Americans are still the favorite, on their way to a clash against the Netherlands on Friday with a spot in the semifinal on the line. The last time the two countries faced off with something on the line, the USWNT defeated the Dutch 2-0 in Paris to win the 2019 World Cup.

However, the run of success for the USWNT and the overwhelming nature of its play makes this version a distinct departure from expectations. Though “survive and advance” is a tried-and-true approach to tournament play across several sports. It also runs counter to the idea that the Americans set the standard when it comes to women’s soccer.

In the minds of many, the hierarchy of international women’s soccer reads the USWNT – significant gap – everybody else. That mindset runs up against the churn of games at the Olympics and the improvement of “everybody else.” Blame it on fatigue or circumstance. Either way, a smaller margin for error is a tough pill to swallow.

The line between entitled and appropriately demanding is a narrow one. That applies especially to Andonovski, who may have made the right choice with this plan against Australia but suffers from following in the footsteps of a coach who won back-to-back World Cups. To be sure, Jill Ellis took her fair share of criticism while in charge of the USWNT. The difference was that her choices never ceded the initiative.

For the USMNT and its fans, the hope is that one day a similar discussion involves them at a major tournament. A semifinal for coach Gregg Berhalter’s experimental group beckons on Thursday night in Austin. Given the circumstances, the expectations are almost impossible to pin down. The most ardent USMNT will always find fault with a performance that isn’t dominant. Berhalter’s teams didn’t put Haiti, Canada, or Jamaica away easily in 1-0 wins. The coach’s choices came under fire in each one of those matches.

Of course, the point of the exercise for the USMNT isn’t just to win a trophy. Coming into the tournament, most observers felt that this version of the team would top out at the final, with Mexico the clear favorite.

Winning doesn’t exactly come second. However, it does sit parallel to Berhalter’s goal of finding additional players who might play a role in a run of World Cup qualifiers coming up in September and October. In that way, the Gold Cup is already a success. Several names are getting added to the list of trustworthy contributors for the fall. It’s easy to forget narrow results when the focus shifts to the exploits of players like Miles Robinson, James Sands, and Gianluca Busio, to name a few.

Berhalter and the USMNT get a pass that doesn’t exist for the USWNT. If there is such a thing as a “B” version of the USWNT, it is rarely seen and is only marginally different than the “A” team. The Gold Cup laboratory is a luxury for the USMNT coaching staff. They get a competitive environment to play with formation and personnel ahead of more important games down the line.

The window of expectations is shifting for the US men, to be certain. Berhalter’s quest to morph into a more possession-focused team with a more sophisticated style of play depends on a group of young players scattered across some of Europe’s biggest clubs. With that, the demands on the team are now different than they once were.

Against most of the non-Concacaf world, the USMNT is still an underdog. In that role, simply winning is enough. When the Americans get back to the World Cup, results will matter more than how they achieve them. The looming question for USWNT fans is whether that team might be facing a similar dynamic sooner rather than later.

For now, there are at least the beginnings of questions about American dominance at these Olympics. Friday’s match is an opportunity for the USWNT to address them. For the USMNT, Thursday’s semifinal is something very different. It’s happening a world apart, in more ways than one.