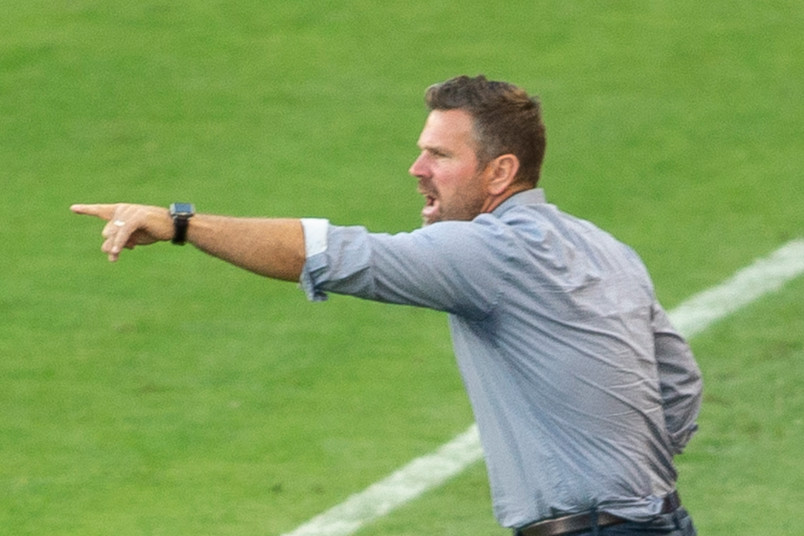 By Luis Bueno – RIVERSIDE, CA (Jul 21, 2021) US Soccer Players – The LA Galaxy has been a not-so-quiet surprise in the early portion of the MLS season. For a team that has not been close to championship caliber, the Galaxy looked more than competent for stretches. In fact, the club looked a bit like its previous iteration – scoring clutch goals, looking capable defensively and, most importantly, winning. But just when the club was poised to hit its stride, life happened.

Life is the unexpected. For the Galaxy, that means injuries and international call-ups. A bum calf and the Gold Cup.

July has been frustrating for the Galaxy. While the team has a win and two losses, the dropped points are worrisome. In a suddenly resurgent Western Conference, the Galaxy cannot afford to drop points at home or on the road against a weak rival.

Missing seven players will hurt any MLS team, but the Galaxy’s depth has proven to be inefficient and a problem spot. Not only is the depth creating a hole the club will struggle to climb out of, it will keep the team from succeeding when life happens down the stretch, as it inevitably will.

Perhaps this is just a reminder that not all is well for the Galaxy, that four years of misery cannot be erased in a month or two. The Galaxy was so poor for so long that it is taking time to level up from abysmal to even respectable. The team had no solid foundation to build on until this season. Setting that foundation is the first step to contending for championships, not the final one.

Javier “Chicharito” Hernandez was on a roll while the Galaxy was winning games and trying to establish itself as a Western Conference contender well into June. His value was already massive with ten goals through ten games. Ahead of the 11th game, though, Hernandez hurt his calf and hasn’t played since. Without him, the Galaxy could not score against Sporting KC on July 4 in a 2-0 loss. The team had enough attack to put three goals past FC Dallas, but that is about as mandatory of a victory as there is given FC Dallas’ spot near the bottom of the table. They followed that with a 2-1 loss to Vancouver at Rio Tinto Stadium

The Galaxy also lost Sega Coulibaly in the Sporting KC match to a groin injury. It was his third game for the club, already boosting the backline. Normally, LA would be able to weather those injuries. Unfortunately, the Gold Cup is this month and cost them five more players. All five are on national teams that have reached the quarterfinal round, delaying their returns even more.

Sebastian Lletget and Oneil Fisher will play against one another when the US plays Jamaica in a quarterfinal on Sunday, which means at least one of the two will return to the Galaxy regardless of the result. Efrain Alvarez and Jonathan Dos Santos meanwhile are off with Mexico while Giancarlo Gonzalez is with Costa Rica. Both nations are favored to win their quarterfinal matchups against Honduras and Canada, respectively, which would set up a Mexico vs Costa Rica semifinal.

The tournament has forced the Galaxy to make do without two dynamic attacking players, two defenders, and its best two-way player in Dos Santos, and the results are showing. The Galaxy scored quickly against Vancouver on the weekend, leading 1-0 after just five minutes. Instead of finishing off a Vancouver side that entered the game in last place on 10 points, the Galaxy failed to threaten. They let in a pair of goals in a head-scratching manner as the defense let the team down.

Perhaps with Coulibaly or Gonzalez in the backline, the team would have been able to slow down Vancouver’s meager attack. The Whitecaps are third from the bottom in the Western Conference in goals scored. Their two goals were numbers 13 and 14 for the Caps this season.

The Galaxy play only Western Conference teams the rest of the way, which a month or so ago seemed like a bit of a bonus. Now, though, that is not the case. Rivals LAFC have reeled off three consecutive wins and look more like its usual selves than the team that sleepwalked through much of the first two months of the season. Minnesota handed Seattle its first loss of the season on the weekend and is now 5-1-3 since starting the season off with four consecutive losses. Sporting KC has not played since July 4 but still sits in 2nd- place on 26 points, two ahead of the Galaxy.

LA’s grip on 3rd-place is not as secure as it was a month ago. LAFC and Colorado are each three points back of the Galaxy, while Minnesota and five other clubs are within five points of those two teams. With MLS cramming full midweek schedules along with the regular weekend shifts through the remainder of the Gold Cup, opposing teams could make up the difference in points rather quickly.

Once the Gold Cup ends and the injuries heal, the Galaxy should get a more representative roster than it has fielded of late. Chances are the Galaxy will still be in the playoff race through the end of the season. That’s not the same thing as contending. That difference looms over the club. Simply put, it will take more than just a solid half-season to return to championship form.