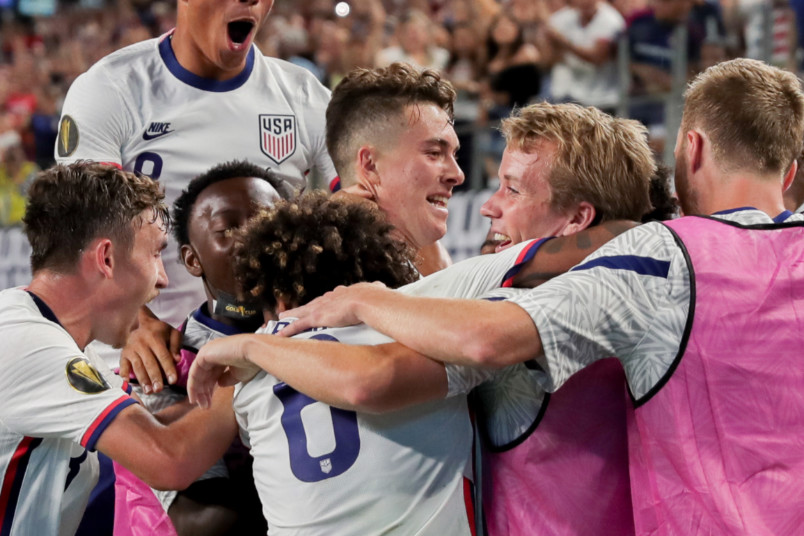 Monday’s soccer news starts with the USMNT’s 1-0 win over Jamaica to advance to the 2021 Concacaf Gold Cup semifinals. As is normally the case with a one-goal shutout, the focus is rightly on the goalscorer Matthew Hoppe and the goalkeeper Matt Turner. That certainly holds for what happened last night at AT&T Stadium. With Turner holding up against Jamaica’s attack, it was Hoppe making the difference with the game’s only goal.

What makes knockout rounds interesting is how teams can change game-to-game. The USMNT showed something different against Jamaica. In turn, that may mean very little against Qatar on Thursday. Qatar knocked out El Salvador, which required seeing off a late comeback after holding a 3-0 lead. Qatar won 3-2, but it wasn’t exactly convincing.

Qatar is having an interesting tournament in that regard, drawing 3-3 in their group opener in Panama. That game showed that both of those teams were willing to push forward in search of an equalizer. That would be an insightful moment for the USMNT, but Qatar’s three games showed a different style of play. The 4-0 shutout of Grenada and the 2-0 win over Honduras to see out the group led into Saturday’s successful holding off of El Salvador.

Against the USMNT, Qatar faces an opponent that keeps control of games while finding ways to win. That could be a frustrating experience for a Qatari team that is fine giving up possession and waiting for the game to get disorganized.

The Austrian Bundesliga kicked off over the weekend with Brenden Aaronson subbing out in the 89th minute of Red Bull Salzburg’s 3-1 win at Sturm Graz. Trailing from an 11th minute own-goal, Karim Adeyami equalized for Salzburg in the 69th minute. Rasmus Kristensen put Red Bull up for good in the 76th with Adeyemi scoring again in the 85th minute. In Belgium, Mark McKenzie’s KRC Genk drew 1-1 at Standard Liege. Down a gaol from the 69th, Genk’s Theo Bongonda equalized two minutes into stoppage time.

In the 3.Liga, Terrence Boyd scored in Hallescher’s 3-1 home win over Meppen. Aaron Herzog opened the scoring in the 27th minute with Boyd doubling the lead in the 39th. Jonas Nietfeld finished off the goals in the 44th minute. A league up, Matthew Hoppe was otherwise occupied, missing Schalke’s 3-1 home loss to Hamburg.

Also in the soccer news, Concacaf announced a new men’s and women’s player of the year award. The award considers total performance for club and country, with national team coaches and team captains account for the largest voting blocks as 82 out of the 100 voting members. “There is so much outstanding men’s and women’s football talent from across Concacaf and these new awards will allow us to fully recognize and celebrate the very best players in our region,” Concacaf president Victor Montagliani said in a press statement.

SI’s Brian Straus on Matthew Hoppe as the difference-maker in the USA win. MLSsoccer’s Charles Boehm with what we learned about the USMNT against Jamaica. Goal’s Ryan Tolmich looks at how the USMNT advanced.