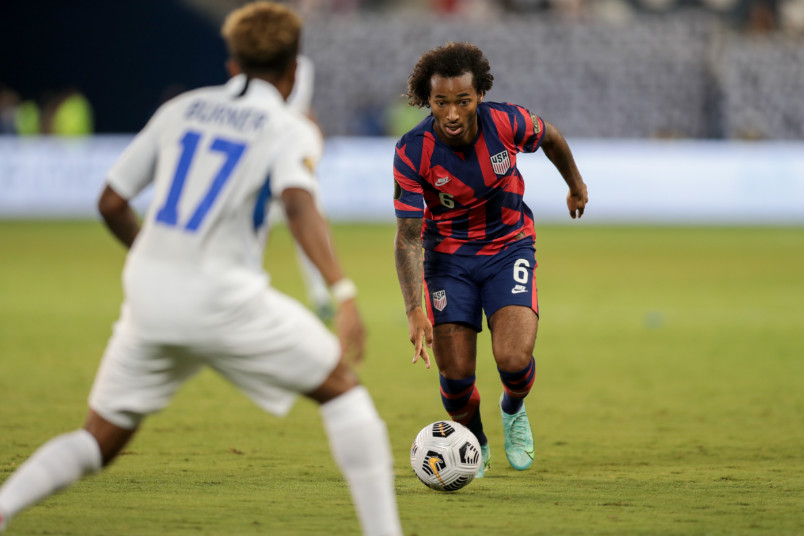 Friday’s soccer news starts with a clear result from an attack-minded version of the USMNT at the Gold Cup. While strength of opponent is always a caveat, the USMNT showed that it could take advantage of a situation with its 6-1 win over Martinique. One goal short of making a draw enough to win the group on Sunday (5pm ET – FOX), the USMNT gave Canada plenty of things to consider.

As the FS1 crew couldn’t help but point out more than a few times during the coverage of the early game, Canada’s 4-1 win over Haiti flatters Canada. It’s hard to draw a meaningful comparison with the USMNT’s 1-0 win over Haiti and Canada’s simply because Haiti deserved more on Thursday night. Near chances, misplays, and giving up two penalties made a close game look like lopsided on the scoreboard. While there’s no denying that’s what counts, it’s still something that should be on the Canadian coaching staff’s mind. What should be on Gregg Berhalter’s mind is stopping Cyle Larin, responsible for a goal and converting a penalty in the Haiti win.

“We’re going into the next game with confidence,” Larin said. I know we went through a little spell, but, it’s always a good match against the US and we’re heading in with confidence.”

So is the USMNT, something that showed clearly as they pushed for the seventh goal late against Martinique. This was a team designed on the night to take away that tiebreaker advantage, and they came as close as possible. Tied on points, tied on goal difference and separated by goals for 8 to 7 in Canada’s favor. That motivation can easily fuel the buildup to Sunday’s rankings decider. We now know what Daryl Dike can do at the top of the offense and how the attack can shift to other options. So does Canada, with that game potentially turning on tactical approach and early goals.

What waits in the knockout round depends on group C. Costa Rica and Jamaica won their opening games and won’t meet until the group’s final matchday on Tuesday. Tonight’s second round of games favors the teams with points, potentially mirroring the scenario we saw play out in group B. Two teams eliminated and the other two playing for ranking.

Also in the soccer news, Brian Rodriguez is once again officially an LAFC squad member. That brings to an end speculation over a potential transfer following his loan to Spanish club Almeria. “I am excited to be back in Los Angeles and to get back on the field with my teammates,” Rodriguez said in a press statement. “I am ready to play in front of our incredible supporters and I am looking forward to helping our team win.”