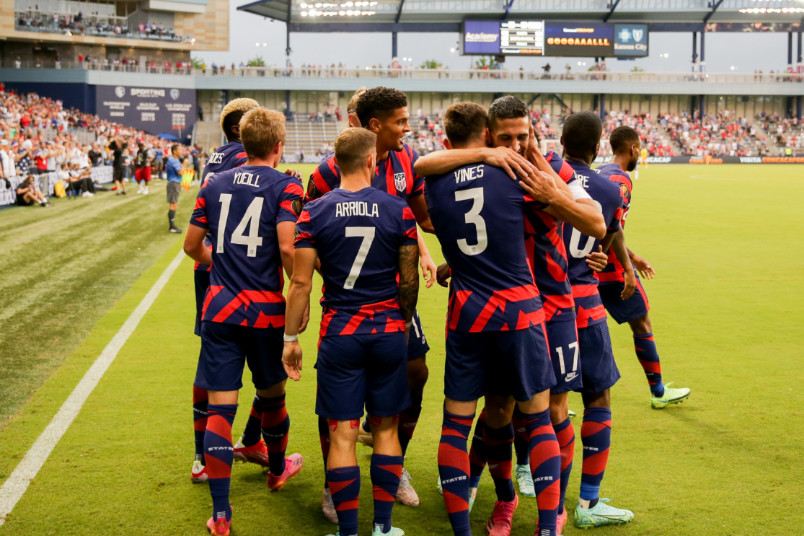 Monday’s soccer news starts with the USMNT picking up three points against Haiti in a 1-0 group B win. With Columbus beating Martinique 4-1, the USMNT enters the second matchday trailing on goal difference at the top of the table. “Only” winning 1-0 needs seeing what Canada does against Haiti before turning it into an overarching talking point. With that in mind, here are three takeaways from the USMNT’s win.

The USMNT finished with 13 shots taken to Haiti’s 10, putting five on goal to their three. The direct comparison isn’t what’s important. The USMNT finished with similar numbers to what a mostly different squad did in the 4-0 shutout of Panama in the friendly following the Nations League win. That, in turn, looked similar to what the US did in the Nations League. Other than possession percentage, not much changes in the number of opportunities. There hasn’t been a rush of shots on goal in any of these games. That speaks to the broader tactical approach. This seems to be what Berhalter and his staff want. It relies on those limited shots falling rather than a glut of opportunities leading to more goals. Just cranking up the offense may not lead to results. Mexico took 30 shots, putting seven on goal in their 0-0 draw with Trinidad & Tobago while holding 83% of the possession. Canada took 14 against Martinique, scoring from four of its five shots on goal with 66% of possession.

Group B is already splitting

After one matchday, there’s already a clear distinction in the group B table. Easy enough to make when two teams win, but it’s also how those teams stayed in control. Canada had the flashier final score, but they were playing the weaker team. Matchday two swaps those opponents, giving us our first point of reasonable comparison. Reasonable isn’t the same as valuable, with the rhythm of tournament play potentially changing things for all the teams involved. Right now, the scenario is how both teams arrive on July 18 with six points and playing for order. Group B teams advance to Arlington regardless, but the winner plays the runner-up from group C rather than the group C winner.

Concacaf announced late on Friday that Curacao wouldn’t be able to play due to COVID issues. The confederation quickly subbed in Honduras, delaying their group A opener by a day. El Salvador won 2-0 with goals in the 81st minute and deep into stoppage time. That puts them at the top of the group going into the second matchday, an unlikely run of events in a group that, at least in theory, suddenly seems competitive. Haiti was missing five players over COVID issues for their group B opener against the USMNT. While everyone understands the push for normality, this tournament is already showing that we’re not there yet.

Also in the soccer news, MLS finished out its pre-Gold Cup schedule with Cincinnati and Columbus drawing 2-2 at TQL Stadium. Edgar Castillo scored for Cincinnati in the opening minute with Luciano Acosta doubling the lead in the 24th. Playing a man down from the 42nd with a red card to Harrison Afful, the Crew staged a shorthanded comeback. Lucas Zelerayan cut the lead to one in first-half stoppage time with Miguel Berry equalizing in the 77th minute.

Remembering Paul Mariner, the former England striker who won the UEFA Cup with Ipswich Town in 1981, who has passed away aged 68.