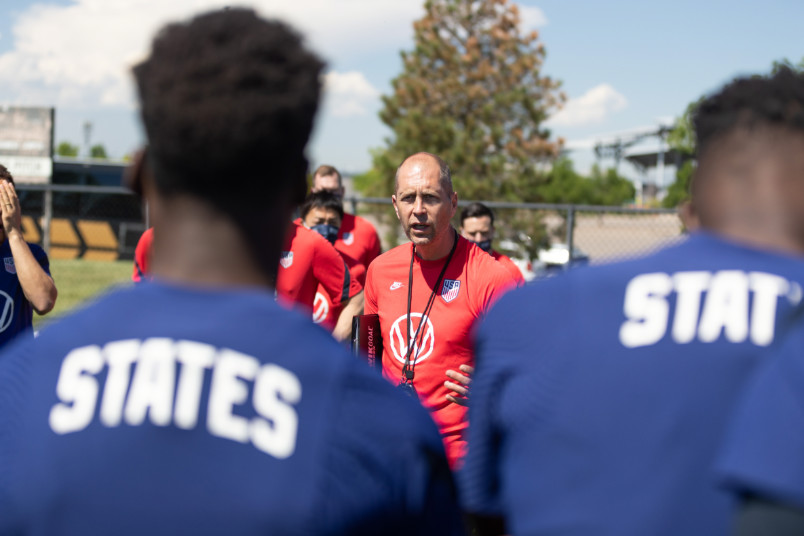 By Charles Boehm – WASHINGTON, DC (Aug 27, 2021) US Soccer Players – The USMNT is finally on the verge of kicking off their long-awaited 2022 World Cup qualifying campaign. USMNT coach Gregg Berhalter named his 26-player roster with all involved well aware of the challenge a three-game international window presents. Here are five key topics of conversation as the final countdown to the opener, United States vs El Salvador at Estadio Cuscatlan on Thursday, begins.

Are they ready for this test?

Encouraging progress has led to significant achievements since the painful close of the last qualifying cycle. The USMNT’s player pool is overhauled. Americans are pushing new frontiers in some of the world’s top leagues. A dozen are taking part in this season’s UEFA Champions League. Two dramatic final wins over Mexico means two trophies over the summer with different squads.

That’s all just a prelude to this journey. Nothing but successful qualification will do. Berhalter made that clear when he took questions from the media on Thursday.

Berhalter, with an assist from his interim predecessor Dave Sarachan, has ushered in a dramatic youth movement over the past two-plus years. Now the games of real consequence arrive.

This September roster’s average age is barely 24 years old, and 13 of its callups are 23 or younger. Only six of them have played a single minute in a World Cup qualifier before. That’s a talking point given the unique and difficult environments this region serves up in this competition. It also underlines the striking evolution of US player development.

During the 2018 campaign, upheaval led to a reliance on older players. While that was happening, the younger generations were rising through an improved domestic youth pathway and/or earning opportunities in big European clubs. That gap now creates opportunity.

For the players, it’s learning these particular Concacaf ropes on the job, the same way they learned how to play themselves into the USMNT picture. That adaptation should be less daunting than in past years because of their high individual ceilings and the experiences offered by the Nations League and the past two Gold Cups.

Still, Berhalter signaled that experience matters by calling in the veteran Tim Ream, 33, even though he picked up what’s hoped is a minor knock with Fulham last weekend. He and fellow defender John Brooks figure to be influential figures on the field and off.

Among a range of unknowns on the road to Qatar, a COVID-compressed calendar has served up probably the biggest in the form of international windows with three matches.

The USMNT’s first run through this unprecedented wrinkle will start on the weekend with a base camp in Nashville and transition to the opener in San Salvador, where USMNT legend Hugo Perez is leading a Cuscatlecos resurgence. Then it’s back to Nashville for a home date with Canada. September finishes with a visit to Honduras at San Pedro Sula’s Estadio Olimpico Metropolitano. It’s historically one of the region’s most fearsome away days but perhaps less so with current caps on attendance levels due to the pandemic.

What that means is 270-plus minutes of high-intensity play in summer heat. More than 4,500 miles of flying in under two weeks, without even calculating for the players’ trips to and from their home addresses.

The early conventional wisdom is that this type of scheduling benefits countries with deeper player pools to handle the intense physical demands. Modern sports science suggests that significant lineup rotation will be necessary to safeguard players’ bodies and maintain the high tempo that Berhalter prefers. The coach wasn’t letting much detail slip on Thursday.

“We’re going to have to see the health and status of the guys as they come into camp and see their load before coming to the camp,” he said. “Then it’s about putting guys on the field that can execute on what we’re looking to do, and can compete with intensity and vigor to win these games. So it’s hard to say right now how we’re going to rotate, but I’m sure there’ll be some type of changing the players throughout the three games.”

That schedule means that the idea of a first choice lineup is more complicated than usual. Each XI will need balancing in tactical and personnel terms, tailored to the opponent and physically fresh. There are questions for the coaching staff.

First, what formations will they use? Berhalter’s default has generally been a 4-3-3. But the USMNT has utilized 3-5-2 or 3-4-3 looks plenty of late, and he’s called in 10 defenders, six of them center backs, suggesting those are leading options.

“I think that flexibility is important,” said the coach. He is also probably thinking about Canada, who probably boast the most high-end talent of these three opponents, having played with three in the back a lot.

Berhalter also seemed to hint at open competition at the goalkeeper spot between Ethan Horvath, Zack Steffen, and Matt Turner. While that’s one position where rest and rotation is less critical, it doesn’t seem out of the question that more than one of them could get a start.

The depth of the player pool means that no single member of the team should need to bear a heavier burden. That said, Christian Pulisic is a huge piece of the puzzle in multiple ways. So it was far from ideal that he tested positive for COVID-19 earlier this month. Pulisic is reportedly asymptomatic, but the quarantine keeps him in London until at least Sunday.

“It’s going to be just day to day to see where he’s at,” said Berhalter. “He’s still under quarantine conditions in England, and we’re going to have to get him Stateside once he clears the quarantine and assess him. It’s really too early to tell if it’ll be available for [Sept.] 2nd, or the 5th, or for the 8th, we just don’t know right now. So it’s going to be a wait-and-see type of thing.”