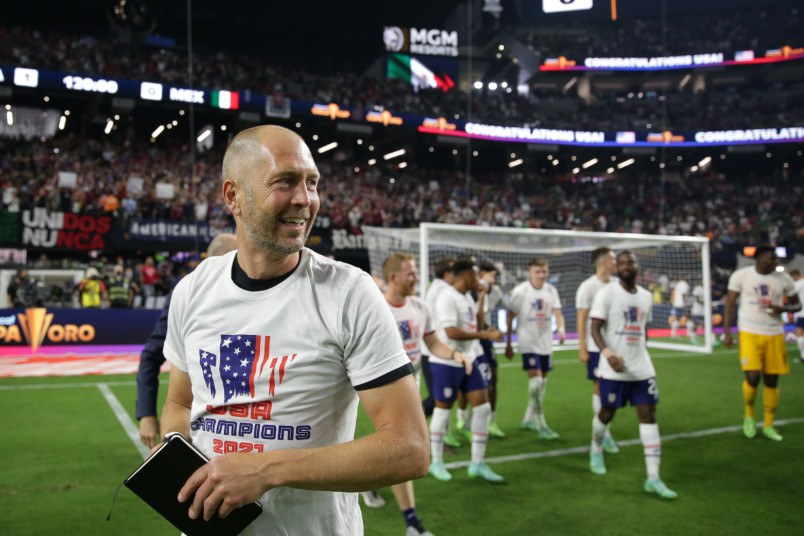 By Charles Boehm – WASHINGTON, DC (Aug 6, 2021) US Soccer Players – Due to safety precautions, direct interaction between teams and the media members covering them has dwindled in the pandemic era. Instead, like so much right now, Zoom calls became the new normal. That was the situation throughout the Gold Cup, the best opportunity to learn about more subtle elements around a team like mood and personality.

Several times a week, USMNT coach Gregg Berhalter or a couple of his players would sit at a table between a computer camera and a backdrop and answer questions from disembodied voices beamed across the continent, occasionally with loud heavy machinery and other stadium ambiance in the background. Since the arrival of COVID-19, it’s become a familiar ritual for those doing interviews. That doesn’t make it any less strange or awkward when the process is actually happening.

Berhalter has a reputation for being cerebral, intense, detail-oriented. Partly that’s just how people perceive his personality, and partly it’s the kind of meticulous mentality his methods ask of those who work with him. Memorably, a few of his former Columbus Crew players have told entertaining stories of the stern trouble they got themselves into for breaking dietary regimens by sneaking pizzas into their hotel rooms on road trips. It’s probably par for the course among most high-level head coaches across all sports.

Maybe the sheer repetitiveness of the media process makes anyone a little punchy now and then. Still, over the past few weeks, the reporters on those Zoom calls have seen glimpses. In the lead-up to the semifinal vs Qatar, Berhalter thought his microphone had cut out mid-answer when it hadn’t.

“I think when I start talking too much, it just goes off automatically. It’s like my wife, this microphone’s my wife,” he deadpanned. “Just kidding.”

This was a spontaneous act of self-deprecating dad humor, a flash of unrehearsed levity from a person and position where that’s not always allowed. Set aside for a moment the fact that Rosalind Berhalter was a highly accomplished player during the height of the University of North Carolina’s NCAA dynasty era, something he knows that we know. There were a few other examples on other calls, most quite fleeting. A one-liner here, a small flicker of a wry smile there, all cutting in contrast to the image of the tactician.

We got another snapshot of that in the wake of the cup final triumph over Mexico, as the story of Matthew Hoppe’s conciliatory T-shirt giving Berhalter the meme treatment made the rounds. Posing for a photo with Hoppe, who’s almost the exact same age as his own son Sebastian, and the shirt, the coach and former national team player looked comfortable and relaxed after a hard-won milestone.

It was a bookend of sorts to Berhalter’s sudden outburst in the Qatar game, where simmering frustration with the refereeing led to a vehement celebration of the game-winning goal in the face of the fourth official. He apologized quickly for that loss of composure, a spark of external emotion condemned in some quarters but welcomed in others. It was a sign of the stakes, a hint of the pressure we the public know exists but often overlook.

As Berhalter’s time in charge of the program unfolds, the big matches, fateful decisions, and moments of consequence add up. Along with deeper readings of his strengths and weaknesses, we’re seeing more of his character even if he seems to mostly want to adhere to the old standards of decorum and conservatism. July, in particular, seemed to suggest that this is a good thing for the USMNT overall.

Everyone, including the coach, understood the Gold Cup squad was young and needing experience at full international level. Berhalter readily acknowledged the areas of unevenness on the roster. He made the ongoing evaluations of both individuals and the collective clear. That didn’t stop him from posing the same mental and physical demands as any other camp, switching between formations and asking players to take on less-familiar tasks and roles.

Credit is due to both the players who embraced the situation and the staff that packaged it in a way that made it possible. The USMNT entered the final with some suggesting they’d already done the work. Berhalter and his players weren’t having it. Instead, they took the journey that one step further. That only enhances the coach’s credibility with the entire player pool.

“The bond that this group has, that we’ve created, is something special. The energy in this group has been incomparable. Let’s bring all of that energy tonight,” said Sebastian Lletget in the team’s final locker-room huddle before taking the field in the semifinal, one of several such moments captured on an episode of Behind The Crest, US Soccer’s insider video series.

The coach responded in kind.

“The only thing that has exceeded our expectations has been the mentality of the group,” Berhalter said after the final. “You never know exactly how the group is going to come together when you name the roster. I’ve been absolutely amazed at the cohesiveness of this group, how players are responding to challenges and how the team is so focused on our goals.”

Berhalter seems to have bridged that gap between player and coach. He’s conveying the famous fighting spirit of years past to the supremely talented teens and 20-somethings of today. For the brainy strategist to make such a breakthrough in the sport’s emotional landscape suggests even more in the months to come.