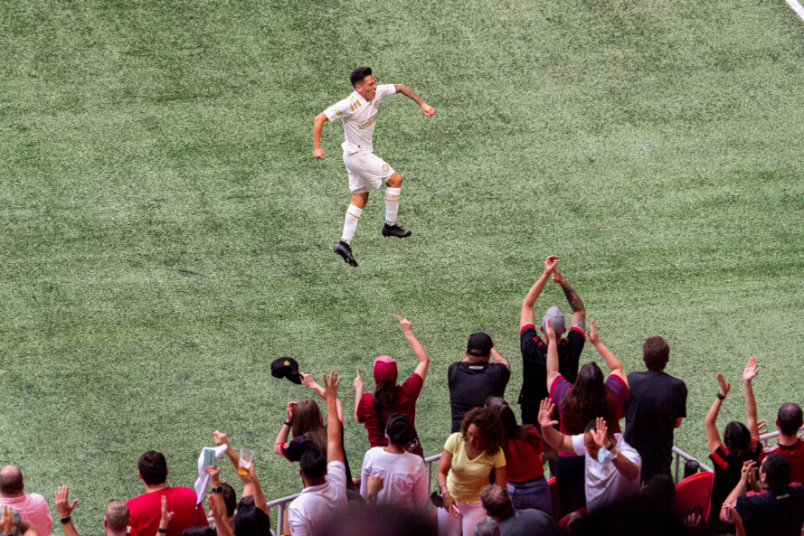 By Jason Davis – WASHINGTON, DC (Aug 20, 2021) US Soccer Players – From the beginning, Atlanta United did things differently. When Major League Soccer’s southern experiment launched in 2017, longtime observers of soccer and sports in the United States carried reasonable questions about the likelihood of United’s success in the city. Since contraction prior to the 2002 season, there was no MLS team south of DC United. Add in Atlanta’s reputation as a fickle sports city that didn’t always back its professional teams, and it was a risk.

The Falcons, the Braves, the Hawks, the departed NHL Thrashers. They all had stories of fans drifting away at the first sign of mediocrity. Win, and the region would rally. Lose, and they’d abandon you as quickly as they’d arrive. It might be possible to get them back, but not until the good times come around again.

With Falcons owner Arthur Blank’s money backing the project, Atlanta United’s plan was to contend from the start. That meant spending big money by MLS standards, though Atlanta United didn’t do that in traditional ways. Rather than scoop up a famous player who had made his name in one of Europe’s elite leagues, United chose to scout South America for players who could lead them to the top. Atlanta redefined the team-building process with a paradigm-shifting coaching hire in Gerardo “Tata” Martino.

It worked. That early success did much to endear the team to the surprisingly receptive soccer fan base in the area. Despite initial concerns that interest in soccer wasn’t strong enough in Atlanta to support an MLS team, the city turned out for the new soccer club in record-breaking numbers.

That happened because of latent demand for soccer because the club marketed itself well, and the club won games right away. Of course, it didn’t hurt that Atlanta opted to keep concession prices low at a brand new NFL stadium.

Atlanta won because it signed players like Yamil Asad, Hector Villalba, Leandro Gonzalez Pirez, Miguel Almiron, and, perhaps most importantly, Josef Martinez. After a poor experience in Italy, Martinez was due for a fresh start. Moving away from the intensity of the European game and in a town ready to embrace every member of its brand new soccer team, Martinez was able to live up to the prodigious talent that got him a chance to play in Serie A in the first place.

United’s new model turned on finding young and/or hungry talent without the premium price tag to deliver results for an exuberant new fan base. Atlanta didn’t need to sign a marquee name. Instead, it could simply make them.

Since the heady early days and the club’s championship in 2018, Atlanta United fell hard into a run of mediocrity. The coaching disruption following Martino’s move to the Mexican national team is partly to blame. Still, the sale of Almiron and the loss of Martinez to a long-term knee injury played a major role.

Right now, Atlanta United is on a three-game winning streak. The nine-point run comes immediately after a coaching change. Interim coach Rob Valentino is universally loved in the locker room and players are responding to the positive atmosphere. That includes Martinez, extremely vocal about his love for his club, teammates, and adopted city. Anxious to get back to his pre-injury excellence, he’s aware of the expectations.

It’s reductive and ignores a host of other factors that go into making for a successful MLS season, but a team is only as good as its best players. In MLS, that usually means its highest-paid players. No club can miss on its Designated Player and hope to reach its full potential, something Atlanta United learned when Almiron and Martinez pushed the club to a championship in just its second year.

Martinez is enjoying his soccer again. With that, the clouds that hovered over the club for two years look like they’re lifting. Former Seattle Sounders assistant Gonzalo Pineda will soon take over as coach, needing to resist the urge for drastic changes..

It’s not just Martinez potentially making the difference right now for Atlanta. Ezequiel Barco has hit a rich run of form as well. For the first time in his Atlanta United career, Barco looks like the player the club paid a then-record $15 million fee for back in January of 2018. Barco joined as Almiron’s replacement, serving as the foil to Martinez in the swashbuckling Atlanta midfielder. A series of off-the-field distractions, coupled with Barco’s inability to put together a consistent run of games, held the player and club back.

Nothing is “fixed” in Atlanta, at least not yet. Pineda will have plenty to work to do when he arrives. Even during the club’s three-game run of wins, Atlanta has benefited more from luck and inspired individual play than from the kind of collectively good performances that once set the club apart from the MLS pack.

Pineda’s hiring feels like one last chance for the club’s management to get it right before something bigger needs changing. Proof of concept is getting into the playoff picture.

Martinez and Barco will go a long way towards turning Atlanta back into a contender. The club has talent in other areas on the field and isn’t lacking in ambition. Newly signed Designated Player Luiz Araujo made his debut against Toronto FC and looks the part ahead of the season’s stretch run.

The margins in MLS are small. Even the biggest spending teams only have a slight talent advantage. The playoffs can upend even the most inevitable championship season. When you can only flex your financial muscle on a handful of players, it’s massively important that they deliver.

Martinez is scoring again. Barco is living up to his price tag. Despite the city’s professional sports reputation, Atlanta United’s fans have stuck around, hopeful that the club will rise again. Is that faith about to be rewarded?