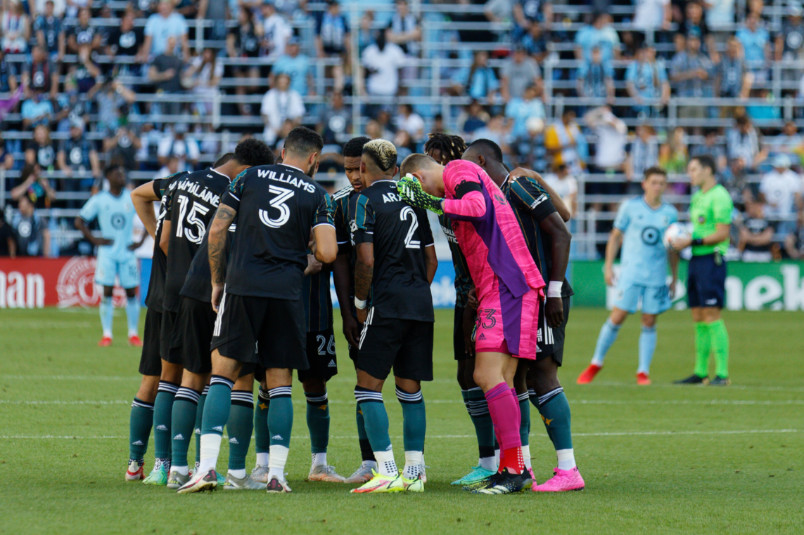 By Luis Bueno – RIVERSIDE, CA (Aug 19, 2021) US Soccer Players – Los Angeles is arguably the biggest soccer hub in the United States, perhaps in all of North America. It’s a safe assumption that fans will turn out for soccer events in the region, making it an easy stop for promoters. In Major League Soccer terms, LA has always been the center of it all. That’s expected to show next week when LAFC’s Banc of California Stadium hosts the 2021 All-Star game.

The league’s most successful team has called the area home since MLS debuted in 1996. LA was the first city to host two MLS clubs, is the first city to have two MLS teams play in soccer-specific stadiums, and is the only city to have had three MLS clubs call it home. The launch of LAFC only added to that reputation, with the new club quickly showing it belonged among the best teams in the league.

So what happens when neither of the LA teams seem capable of playing themselves out of trouble? LAFC is already there, while the 3rd-place Galaxy will join them soon enough if the team fails to shake out of its funk. Staying relevant in MLS requires winning. Teams fade quickly in this league, going from talked about to dates on better teams’ schedules.

LAFC lifted the Supporters’ Shield in 2019 and reached the Concacaf Champions League final a year ago. That’s the highwater mark for LA soccer since 2014. Come playoff time, Angelenos expecting to have two star-filled clubs fighting not only for regional supremacy but for MLS glory is not quite working out the way they had hoped. The teams have stars on their respective rosters. They’ve both pulled off some big wins this season. Yet both are now wondering what it takes to really matter in the Western Conference.

Is this fair to the Galaxy? After all, they only trail 2nd-place Sporting Kansas City by three points and Western Conference leaders Seattle by four. Colorado is a point behind in 4th-place, but on 18 games played to 20 for the teams in the top three. The problem is inconsistent results calling the Galaxy’s project into question.

The Galaxy lost to Colorado on Tuesday by 2-1 at Dignity Health Sports Park and lead the Rapids by just one point now through 20 games played. Prior to the loss to Colorado, LA took 10 points from four games. That included a clutch win over Minnesota. Over the five games before that, the Galaxy went 1-3-1 and lost a big game to Sporting KC.

Hernandez has missed the last ten games due to a calf injury and has had several setbacks during his recovery. Newcomer Rayan Ravelson has surprisingly filled the scoring role with five goals in his ten games. If Hernandez can come back healthy, that could create a strong pairing up front. Without Hernandez in the lineup, this is simply a different team.

LAFC, meanwhile, can’t find the attacking rhythm that has been its hallmark from the start. They’ve scored 24 goals this season, seventh-best in the Western Conference but nowhere near meeting their expectations. The team made some moves this summer to try and rectify that. Winger Brian Rodriguez returned from a loan. They traded Mark-Anthony Kaye and Corey Baird to clear salary cap space, using that to acquire Colombian striker Cristian Arango. The team is hopeful that the attack will come to life when Arango adjusts to the league and to LAFC, but that might come too late to make a difference this year.

Right now, they’re an 8th-place club on the strength of a 6-8-5 record. Center back Eddie Segura is out for the season, and the team’s consistency has suffered. How bad is it? LAFC put together a three-game win streak to start July. That’s the only time this season they’ve won consecutive games. MLS is a league built on streaks. Without them, LA is stalling.

The bar for LA’s MLS clubs is high by default. While there’s an argument that the Galaxy is close enough to count, it doesn’t resonate the same way. LAFC’s troubles are more pronounced, but both clubs have to wonder why it’s so hard for either of them to get more out of this season. That’s a narrative that could continue into the playoffs for one or both of these teams.