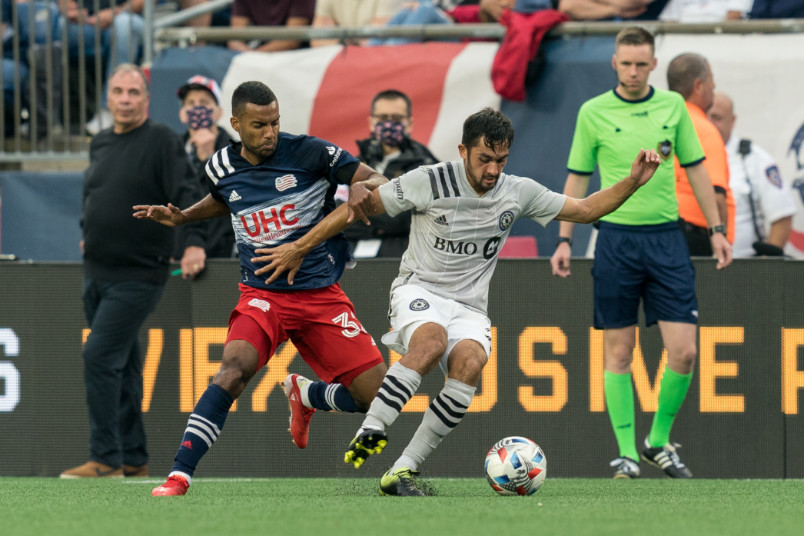 By Luis Bueno – RIVERSIDE, CA (Aug 4, 2021) US Soccer Players – The Power Rankings had their biggest shakeup of the season as the front running Sounders fell into a three-game losing streak. Three losses will impact a team’s standing, but the overall season counts as well as current form.

Whether Gold Cup absences were the reason for the slide is an open question. Certainly, the Gold Cup did have an impact on the league as a whole. Welcoming players back from Gold Cup duty could cause another shakeup this time next month.

New England was embarrassed in its July 7 match against Toronto, going down 3-0 early in the first-half. The Revs battled back and made the score respectable but still lost 3-2. They responded with four consecutive wins. Now the Revs get back Gold Cup hero Matt Turner as well as Canadian international Tajon Buchanan, both named to the Gold Cup Best XI with Turner winning the goalkeeper award and Buchanan the young player.

It was bound to happen. Seattle was not going to remain unbeaten this season. On the other hand, dropping three games is a surprise. Whether it’s just a rough patch or a symptom of something worse is the question. A home loss to Sporting KC is one thing but losing to San Jose at home is a bit worrisome. Seattle has the mental strength to get past this stretch, but it needs to happen before other teams make up ground.

NYCFC dropped games to Montreal and Columbus in early July but closed out the month with a 5-0 over Orlando and a 4-1 win over Columbus. Suddenly NYCFC has the second-highest scoring offense in MLS (30 goals for) and the league’s best goal differential at +12. NYCFC has balanced scoring with Jesus Medina on seven goals, while Valentin Castellanos and Ismael Tajouri-Shradi have six each. Strong defense will help this club contend with New England for the top spot in the East.

Sporting KC throttled Seattle 3-1 at Lumen Field and declared the Western Conference a two-team race. Then the club promptly lost 2-1 to FC Dallas. Sporting KC may have exhausted itself in defeating Seattle and had nothing left in the tank. Gianluca Busio and Alan Pulido are back from the Gold Cup, potentially helping push Sporting into that top spot.

Nashville continues to surge toward the top of the Eastern Conference. The club has not lost since the first match in June and was 3-0-2 last month. Nashville is firmly entrenched in 3rd-place and figures to remain in the mix the rest of the season. The club lost Walker Zimmerman to the Gold Cup and then to a hamstring injury while with the USMNT.

Orlando City was all over the place in July but closed out the month with a much-needed comeback victory over Atlanta. After losing just once through June, Orlando lost three games in July, including a 5-0 rout at the hands of NYCFC. The win over Atlanta showed Orlando’s mental strength, to be able to recover from not only the loss to NYCFC but to score two late goals to grind out a home win against a tough team.

Philadelphia has had mediocre results over the last six weeks and now faces potential player movement and the Concacaf Champions League. Reports link Jamiro Monteiro with moves to, among other clubs, Eredivisie side Feyenoord and Belgian side Anderlecht. Then there’s the resumption of the Champions League with the Union needing to switch focus for a semifinal series against Club America.

Whether or not Colorado is a legitimate contender or just an okay team taking advantage of playing in a weak conference will play out in August. Colorado plays twice against Sporting KC and also plays the Galaxy and RSL. They made a nice pick-up in trading for LAFC’s Mark-Anthony Kaye. With Kaye around, Colorado adds to an already loaded midfield. That could carry the team down the stretch.

The Galaxy came out of the Gold Cup summer without too many lumps. They’re still in 3rd-place despite having to make do without players like Sebastian Lletget, Jonathan dos Santos and Efrain Alvarez. Some results were bad (4-0 loss to FC Dallas) while others were solid (4-1 win over Portland). If the Galaxy ever gets Javier Hernandez back healthy, the team should stick around near the top of the Western Conference table.

The last few weeks have been about addition and subtraction for LAFC. The club added some offense at the expense of depth as LAFC shipped out Mark-Anthony Kaye and Corey Baird to make room for Cristian Arango, who joined from Millonarios FC. While LAFC sacrificed depth for talent, they suffered a major blow with Eddie Segura out for the rest of the season with a knee injury.

Minnesota was the first team to beat Seattle, but that didn’t turn into a run of form. Instead, they closed out the month with their third 2-2 draw of July, but the last one was particularly rough. United allowed a late penalty to Vancouver and squandered a stoppage-time lead.

Left for dead earlier this season, DC United has had a respectable run to get back into contention. Last month started off well, with a resounding 7-1 win over Toronto. DC also beat the Red Bulls, compiling eight points in five games in July. Five of DC United’s six August games come against teams currently in a playoff position. If DC comes through this test unscathed, they enter the conversation in the East.

After a strong start to July, the Red Bulls ultimately had a bit of a letdown month. The Red Bulls opened July with a 2-1 win over Orlando City SC but then had a pair of 1-1 draws, a 1-0 loss to DC United, and then a heartbreaking 3-2 loss to New England. The Red Bulls led 2-1 with 83 minutes gone in that one. With five of its next seven games at home, now is the time to add points.

Were it not for LAFC, July would’ve been a splendid month for RSL. As it stands, RSL collected a respectable eight points in July but two losses to LAFC made things difficult. Still, RSL had three clean sheets and beat rivals Colorado by 2-0 last month. Whether it’s smoke-and-mirrors or if RSL is truly a contending team should play out in August with four of its six games on the road.

Montreal had a busy month, playing six games despite MLS skipping a weekend. The club ran out of steam after picking up three wins in its first three July games. The biggest positive for CF Montreal is that Stade Saputo is once again home after a prolonged stay as the other MLS team in Fort Lauderdale.

Four consecutive draws to start July may not seem particularly solid, but it was for San Jose. After a rough stretch that saw them lose six of seven, the ‘Quakes weathered the storm and ran off a four-match unbeaten run to start July. Then they beat the Sounders 1-0 at CenturyLink Field to add an exclamation mark to the turnaround.

Is there a more frustrating team in this league than Portland? The club closed out July with a 4-1 loss to the Galaxy, its third loss by that same scoreline this season alone. Yet, Portland is still in the playoff picture with wins over LAFC and FC Dallas last month. Figuring out how to start games strong and maintain their consistency is going to be the difference.

Houston has not won since May 22, but the season is not quite in a tailspin. During its nine-match winless streak, Houston has two scoreless draws and four 1-1 draws. The club traded for Corey Baird in hopes of sparking the attack, which is something that could jar the Dynamo. Houston plays three of its first four August games on the road, where they’re winless. That suggests trouble ahead.

Now under interim coach Rob Valentino but linked with Seattle assistant Gonzalo Pineda, Atlanta parted ways with Gabriel Heinze on July 18. They’re now actively pursuing reinforcements in the transfer market, showing that the club has not thrown in the towel on this season quite yet.

Austin FC has done well to build up its defense, but the attack did not follow suit. After a 4-1 win over Portland to start July, Austin lost four consecutive games by a combined 4-0. With just ten goals scored this season, the poor offensive showing is ruining an otherwise stellar defense. Only two teams have allowed fewer goals than Austin’s 16.

It’s the Ricardo Pepi show now. FC Dallas made an investment in the 18-year-old in the midst of his breakthrough campaign. Pepi became the league’s youngest player to record a hat trick when he hit for three goals in a 4-0 win over the LA Galaxy on July 24. FC Dallas closed out July with two wins as the team is showing signs of life. With the bottom of the Western Conference a mismatch of struggling teams, FC Dallas is on the move.

FC Cincinnati turned a somewhat positive June into a stagnant July with no wins in six games. Four of those were draws, firmly in the better than nothing category but not exactly exciting. Improving the defense is still the primary issue, though time is running out for real changes.

Toronto FC bottomed out with a 7-1 loss to DC United to start July and coach Chris Armas paid with his job. Since then, Toronto FC has looked like a new side. Unbeaten in five games with Javier Perez as interim coach and a return to BMO Field, there’s enough time left for a late-season surge.

The Whitecaps are back training in Vancouver but had to wait for a true home game. BC Place had a booking sending the Whitecaps back to Rio Tinto Stadium for one more game. That turned into a 2-2 draw with Minnesota and a stoppage time goal to split the points. What Vancouver does at home now waits for August 21.

Chicago isn’t rolling over much anymore. Outside of an unsightly 5-1 loss to Nashville SC, they were surprisingly solid in July and the first match of August. Chicago had wins over Orlando and Atlanta and started this month off with a draw against the Union. To do anything more than challenging for 10th place in the Eastern Conference is already out of reach but playing competitive soccer is a respectable goal.

Inter Miami ended two-plus months of futility by getting past Montreal 2-1 in its final game of July. Gonzalo Higuain scored both goals to help Inter to just its third win of the season. The win was not enough to prevent Inter Miami from sliding into the cellar. With the return of Rodolfo Pizarro, the club could use the momentum for success in August.