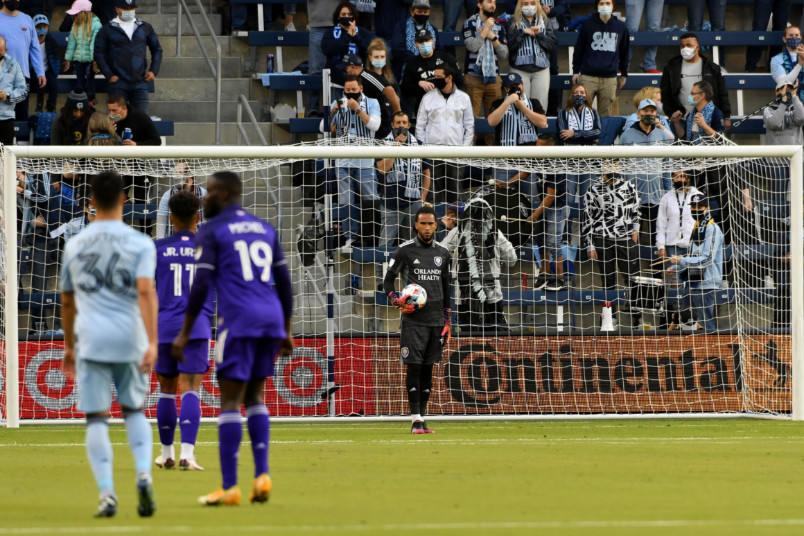 By J Hutcherson (Aug 31, 2021) US Soccer Players – We’re at the point of the 2021 Major League Soccer season where it should be easier to separate the top clubs from the rest. Going into round 23 of the schedule, New England has a 14-point lead at the top of the Eastern Conference table. It’s Orlando City and Nashville tied on points behind them, both on 35 points and with Orlando holding the tiebreaker. New England has played more games, but at best, that’s going to cut the points gap by six.

Orlando City is putting together the kind of season that asks familiar questions in MLS. They lost three games in July, back-to-back games at home to the Red Bulls and at Chicago and then at NYCFC. None of those losses necessarily represent Orlando’s quality. A six-game undefeated streak since includes four draws, once again perhaps not telling us as much about this team in one-off must-win scenarios.

Surprising no one, Nani’s nine goals are two more than Benji Michel and Tesho Akindele combined. Nani also leads the team in assists. It doesn’t take intense scouting to figure out who to stop with City. It’s worth wondering what they would look like with a full season of Daryl Dike, so far scoring twice over three appearances.

A one-dimensional team is only a problem if their opponents consistently stop them and/or that player’s output stalls. Otherwise, it’s MLS business as usual for one player making the most of the difference. The book on Orlando should be a team that doesn’t take many shots (a dozen per game) while putting 4.5 of those on goal.

It’s no surprise that Nani made the 2021 MLS All-Star team, but goalkeeper Pedro Gallese got the nod after only playing ten games. He lost losing time this season to international duty with Peru and then to injury. Brandon Austin started the initial five games Gallese missed, leaving at the end of his loan from Spurs at the end of July. With Gallese injured, it was Mason Stajduhar getting five games in a row in goal. At least for Orlando, being pressed into goalkeeper by committee has worked well enough. It’s not ideal, but MLS asks a lot of its squads, especially in summers with international obligations.

While it’s certainly tempting to consider an Orlando City season so far in theory, close to full strength for every league game, what they’re putting on the field works well enough. Their last loss was their biggest of the season, 5-0 to NYCFC on July 25. That game now looks like a line drawn by this club. Four out of five of their next games ended 1-1. Their wins were both by a single goal. It’s about keeping games tight and trusting what they’re doing well even when the goals may not necessarily fall.

Meanwhile, the team tied on points with Orlando is about letting the offense flow. Nashville SC is near the top of the charts in both shots per game at 14.4 and on goal with 5.6. They’ve got a +12 lead on goal difference, with 34 scored to Orlando’s 30, losing only twice this season.

Those losses only tell us so much. 2-0 to the Red Bulls on June 18 and 2-1 at Inter Miami on August 8, neither pointed to significant issues the team needed to address. They led against Inter early in the second-half, gave up a 60th minute goal to the likeliest scorer Gonzalo Higuain, and then Miami scored five minutes into stoppage time. They responded by beating DC United 5-2 at home a week later.

What could change things for Nashville is a looming road swing that will take in four consecutive games in September and five out of six in October. 28 of Nashville’s 34 goals have come at home this season, along with all but one of their eight wins. They spread the offense between CJ Sapong (nine goals, three assists) and Hany Mukhtar (eight goals, seven assists), but Sapong has only scored once away from Nissan Stadium. Mukhtar has two away goals, but they came in the same game.

Nashville hosts Orlando on September 29, away on October 31 to complete the three-game season series. It was Nashville taking the lead against Orlando at home on August 18 in a game that ended 1-1. It’s a result that doesn’t exactly resonate for either club.

“There’s still a lot of work to be done, but this conference is one of the most competitive I can remember,” Nashville coach Gary Smith said following that draw with Orlando. “It’s amazing. When you look around at the results, the only team that you can almost rubber stamp for a victory and keep plowing on is New England. Anyone else, there’s a fine line between the teams.”

Scan the Eastern Conference table, and it’s easy enough to understand what Smith means. It’s a 2021 regular season where opportunities depend on strength of schedule and player availability. It has to be a frustrating situation, even for the clubs that are finding success.