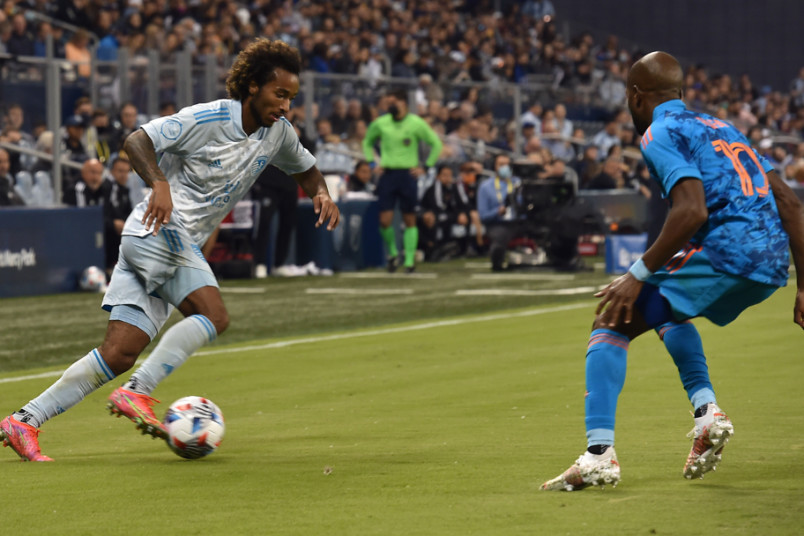 By Jason Davis – WASHINGTON, DC (Aug 20, 2021) US Soccer Players – Major League Soccer’s evolution as a “selling league” in the parlance of the world soccer market is a net positive. For the first time in its history, MLS is fully engaging with the international market for players. Long little more than an occasional buyer of relatively cheap and/or over-the-hill talent, MLS is now a provider of players to richer, more prestigious leagues in Europe.

“We’re in the great game now and there’s no turning back,” Seattle Sounders general manager Garth Lagerwey said earlier this month. “We’re joining the rest of the world. Buying and selling young players is part of global soccer. For a long time, MLS existed apart from the rest of the world. That is inevitably changing. We’ve really flipped to embrace that.”

Lagerwey’s comments came after the club acquired Leo Chu, a 21-year-old attacker from Gremio of Brazil. Seattle executed the kind of move that speaks to a new trend of MLS clubs spending substantial sums, a reported $2.5 million in Chu’s case) to sign precocious youngsters out of places like South America. The Sounders’ investment is about winning games in Major League Soccer, but it’s also about turning Chú into a valuable asset sellable at a profit down the road.

The move for Chu reflects on the growing respect MLS is earning in the European market. Gremio, who is retaining 20% of Chu’s rights, Chu’s representatives, and Chu himself can see the interest in buying MLS-based players is on the rise across the Atlantic. New salary budget initiatives and incentives created by MLS make the prospect of finding, developing, and selling players more attractive to MLS clubs than ever before.

While most of the focus at the moment is on the academy-developed players leaving for seven- and eight-figure transfer fees to destinations in Europe, the league is engaging with all aspects of the transfer market. The pandemic oddly aided the buying side of the equation, as MLS took advantage of its more stable financial position to snatch up young talent from cash-strapped clubs.

The “graduating class” of players sold to European teams over the past year, a dramatic increase over the past, creates a wake. The more talent MLS sells, the higher the pressure to replace that talent with the next batch.

It’s worth pointing out that a handful of teams are carrying the bulk of the load in regards to player sales abroad. Of the league’s transfers of players to European clubs over the last three windows, the Philadelphia Union and FC Dallas are responsible for the majority of them. Other clubs sending players out on significant deals include the New England Revolution (after Club Brugge confirmed Tajon Buchanan’s move on Tuesday), Sporting Kansas City (Gianluca Busio to Venezia FC), the Colorado Rapids (Sam Vines to Royal Antwerp), and the New York Red Bulls (Caden Clark to RB Leipzig).

Philadelphia and FC Dallas make player development as key parts of their club identities. Selling a player abroad is a success, but bringing through the next talented young academy prospect completes the circle. It doesn’t need to be a one-for-one replacement. However, if MLS is going to be more than a flash-in-the-pan on the international market bringing through players who have the potential to eventually make their moves to Europe must become a habit.

Few, if any, of the Union’s homegrown group will merit multi-million-dollar interest from abroad. Development is a numbers game. The results across the group will range from MLS bit players to potential stars. What matters for Philadelphia is that the program that developed Brenden Aaronson and Mark McKenzie sets players up to follow in their footsteps.

Enter Ricardo Pepi, the El Paso-raised striker whose goalscoring exploits are earning him praise and USMNT attention. Rumors around a possible move for Pepi swirl daily, indicating that the FC Dallas talent train isn’t slowing down.

For MLS, there is no turning back. Academies that churn out new players to add to ranks of the league’s roster will only need to improve across the league. Bringing players like Chu in helps further the league’s reputation as a “stepping stone” competition. That will also help.

The greater the numbers of high potential youngsters, the less pressure there is on any specific move. LAFC has yet to cash in on Diego Rossi, despite his excellent play in MLS. Atlanta United faces its own keep or sell situation with Ezequiel Barco. The point of the new initiatives and focus on developing talent should make those scenarios the norm league-wide.

MLS instituted the U-22 player initiative to capitalize on depressed prices and help fill the void left by transferred players. So far, the program is proving popular this summer. Those players represent a new kind of investment for MLS teams, even while they attempt to grow players from within their academies.

The benefit to MLS to produce players who generate interest from European clubs goes behind the revenue stream. Every rumor and eventual sale brings a buzz to the league. Player development is marketing, not just as a means to sell local fans on coming out to see locally developed players, but as a way to draw attention to the competition from those not yet invested in MLS.

Developing and buying new young stars to replace the class of old young stars shipped off to fly the flag for MLS development in the best leagues of Europe is just smart business. So far, so good.