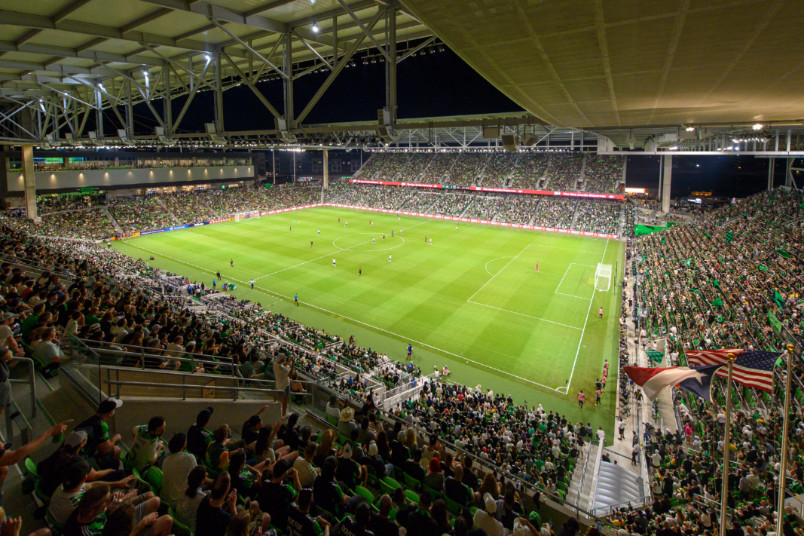 By J Hutcherson (Aug 17, 2021) US Soccer Players – Major League Soccer has a long tradition of unbalancing the schedule. Figuring out the table takes more than assuming all teams playing the same number of games at any given time. For long stretches of the season in this league, it’s points plus games played up and down the conference tables. Even that may not be enough information.

With MLS set for another midweek matchday, Sporting Kansas City is at the top of the Western Conference with 37 points from 19 games played. 2nd-place Seattle and the Galaxy in 3rd have also played 19 games. It’s an easy enough comparison. Well, except for Colorado hanging out in 4th with 31 points from 17 games. Turn that two-game difference into wins, and those six points would have them tied at the top of the table with Sporting likely ahead on goal differential, the second tiebreaker.

At the bottom of the table, Austin FC is in 13th-place with 16 points from 18 games. they trail Vancouver by a point, both on the same number of games. The four teams ahead of both of them have played 19 games. Assuming that the 19th game turns into a win for one or both of the bottom clubs, they would pass 11th-place Houston.

It works in the other direction at the bottom of the Eastern Conference. Toronto FC has 15 points, one less than the two teams in front of them. Unfortunately for Toronto, they’ve played 19 games while Cincinnati and Inter Miami are on 17 played.

Taking the table as it stands rather than trying to make up for that unbalanced schedule, where do we really find the bottom clubs over halfway through the 2021 season? Starting with Austin, that requires accounting for another MLS tweak. If a club doesn’t have a stadium, frontload the schedule with road games and then backload it at home. Austin surprised with some of those road results, but losing three consecutive games in May and then again in July would bog down any team. Add to that a weird June where they drew three and lost one.

Austin plays the rest of August at home against Vancouver, Portland, and FC Dallas before starting September on the road at Vancouver and Houston. With no disrespect to the level of competition, all of those are games where they have a chance against conference opponents. As it stands, Vancouver, Houston, and Dallas are the teams directly ahead of them in the table. Not losing along with other results could easily push them out of last place.

Is that flattering a 4-4-10 club tied for the second-worst goal difference in the Western Conference? Maybe, but it speaks to that broader problem with not clearly knowing how good or bad teams are based solely on their place in the table. It takes more, accounting for that disparity in games played, scoring in a league where that’s normally an easily difference-maker, and form.

FC Dallas chased a three-game losing streak with a four-game undefeated run to suddenly turn into more than expected. Instead of hanging out with Austin, they were the team that drew with Seattle in the midst of taking ten points from four games. Dropping their last game to Western leaders Sporting KC at home told us exactly nothing about Dallas, a team all but written off in mid-July.

Austin has every excuse to underdeliver, but it’s hard to look at the table and see their season playing out to an obvious conclusion. It’s different in the Eastern Conference. Still, the churn of games should have Toronto wondering if they have the space for something approaching a turnaround.

It’s a surprise that the Canadian teams forced to play in the United States due to pandemic restrictions hit Toronto harder in the standings than Vancouver or Montreal. None of those teams are lighting up the league as they return to normal at home. Club de Foot stays in 7th-place in the East after a bizarre sequence of penalty retakes eight minutes into stoppage time at home against the Red Bulls. Turn those three points into one, and they’re still in 7th but tied with 8th-place Columbus.

Montreal is 11 points ahead of last-place Toronto and they’re equal on games played at 19. Since MLS always seems to produce a but, Toronto is undefeated at BMO Field since their return on July 17. They had broken a six-game losing streak the game before by beating the best team in the East on the road. Now, Toronto starts a four-game road swing against three teams that aren’t in a playoff spot and Montreal.

That’s not the clearest opportunity for Toronto to move up the table. From September 14 through the end of the regular season, Toronto plays eight of its 11 games at home. If that home form holds up, it’s not hard to see Toronto at least in the conversation higher up the table.

Whether or not that’s downplaying the chances for the clubs ahead of them is worth asking. 13th-place Cincinnati and 12th-place Inter Miami are a point ahead on 17 games played. The 11th-place Red Bulls have 19 points from 18 games. New York is about to open a four-game homestand. FC Cincinnati doesn’t get one of those until October. It’s worse for Inter Miami, looking forward to a four-game road swing starting in late September.

If it’s possible to keep unbalancing an unbalanced schedule, that’s how last-place Toronto ends up with an advantage. It’s also how Austin ends up not adrift at the bottom of the Western Conference.