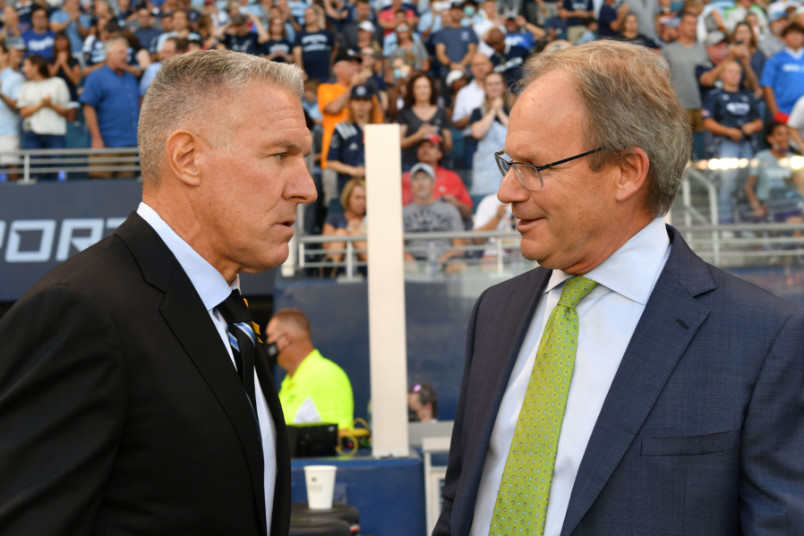 By J Hutcherson (Sep 28, 2021) US Soccer Players – Week 28 is another midweek wonder from Major League Soccer as MLS gets the games in over a compacted season. There are either eight or nine games left for those in the playoff positions in the Western Conference. While the East is getting the attention for how close the playoff positions are, it’s also a tight table at the top in the West. Three points separate Seattle, Sporting Kansas City, and Colorado.

It’s easy enough to look at Colorado as a surprise, but this is a team that has drawn their last four games. That’s part of an eleven-game undefeated run, but it looks like a substantial missed opportunity. 1-1 at home to the Galaxy, 2-2 at Portland, 1-1 at home to Vancouver, and another home draw over the weekend, this time 0-0 with Toronto. Given Colorado’s form, turning those four games into more than four points is easy.

“I thought in the last four games we created enough chances to win and also we made enough mistakes to lose points, meaning there’s generally one or two mistakes that led to something that led to the game being tied,” Colorado coach Robin Fraser said. “Tonight was very different. We didn’t concede anything, we didn’t really concede many dangerous opportunities. In that sense, it’s different than it was in the last couple of games and we probably didn’t create as much as we did in the last couple of games. There’s no one thing over the four games. Each game has something that was slightly different, things that we could be a little bit better at.”

Not getting a goal or the other two points against the bottom club in the league should provoke that kind of response. Still, Colorado is in a situation with a glut of games playing their sixth to close out September at home against Austin on Wednesday night. That’s the bottom club in the West, but coming off of a 2-0 home win over the LA Galaxy.

The Galaxy’s situation is receiving the appropriate attention, with the Austin loss only underlining their recent problems. Seven games without a win, three of those draws, and the Galaxy dropped to 5th-place. For Austin, wins stop the comparisons to better expansion seasons.

“The negative side gets talked about a lot, because that’s an easy narrative to go after,” Austin coach Josh Wolff said. “But these guys are grinders, they have it in them, and from the start tonight, it was a very collective professional performance.”

Getting those on-demand in MLS is always an issue, even for contending teams. The Seattle Sounders built up so many points early in the season that it still overshadows their occasional dip in form at the top of the table. This is a 1st-place team, showing they can regain the top spot under pressure even if they trail New England by 14 points with three games in hand in the Supporters’ Shield race.

Seattle put together a performance on Sunday in a 2-1 win at 2nd-place Sporting. That was a 2-0 lead before Johnny Russell pulled a goal back for Sporting in the 60th minute. Sporting has a game in hand, so it’s not straightforward to say that a win over Seattle would’ve made them the legit 1st-place team in the West. The schedule still isn’t cooperating in that regard. What we saw was a Seattle team who knows how to take control of a game and can quickly shake off disappointments.

“It was especially hard because look, everybody wrote the story about how we came up short against Leon and how are we going to bounce back mentally,” Seattle coach Brian Schmetzer said. “Well, our team just gave you guys the answer.”

That should resonate at the top of the Western Conference. Seattle is at San Jose on Wednesday, a trickier game giving the Earthquakes’ ability to put in a solid 90 minutes against teams with stronger squads. LAFC ran into that at PayPal Park on Saturday, falling behind in the 3rd minute and the 47th in a 2-0 loss.

“In a big game, you can’t start each half with bad mistakes,” LAFC coach Bob Bradley said. “San Jose is always a difficult team to play against. It’s a choppy game. It’s hard to get a rythym. So in those ways, we put ourselves in such a difficult spot where we get behind right away and come out in the second-half and let them add to their lead.”

For Sporting Kansas City, they can take something away from the home loss to Seattle. It wasn’t a shutout, and the game didn’t seem to get away from them. At Dallas tomorrow, the expectation is keeping pressure on Seattle and space above the Rapids. In other words, three points on the road from a team that made it clear what matters is MLS play.

“I thought in the first-half we were just playing the game,” Sporting coach Peter Vermes said. “We weren’t out there to win the game. There’s a big difference in the two mentalities. We were just playing in the first half. In the second half, we came out to win. We went after it a little bit. We were making penetrating runs, getting in the box, service into the box, that type of thing. That ultimately causes chances and creates goals. We scored and we could have scored another one. Seattle cleared the one that was inside the six-yard box that was right there.”

While it’s normally an interesting combination of tempting and easy to turn half-chances into three points in theory, right now, the Western Conference lends itself to that. Seattle isn’t the runaway team. The Galaxy went from in contention near the top of the table to a 5th-place problem. Colorado stalled on its way to taking over the top spot. Heading into the October international break’s squad disruptions, we may still not know much at all about the Western Conference.