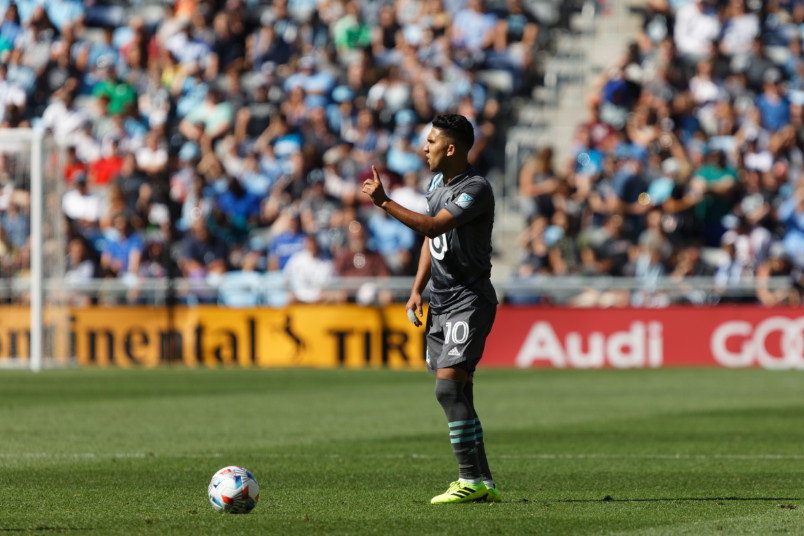 By Jason Davis – WASHINGTON, DC (Sep 22, 2021) US Soccer Players – It’s that time of year. The leaves are turning, sweaters are emerging from storage, there’s a nip in the air, you can’t get away from pumpkin spice, and Adrian Heath is playing his favorite card. Following Minnesota United’s 3-0 victory over the LA Galaxy on Saturday, the Loons coach went back to a theme he has visited year-in, year-out since his arrival in the far north.

“Some of the stuff that was said, you would have thought that the season was over, may as well go home,” he said after the win. “So, the demise of Minnesota United is probably not as great as some people think.”

The Loons, like several MLS teams thought to be contenders when the season began, arrive at the stretch run of the regular season desperate for points. The year hasn’t gone quite to plan. Minnesota United needs to do some work to make sure it makes the postseason again.

Remember, the Loons not only made the playoffs in 2020, but they also reached the Western Conference final. If not for an incredible late-game comeback by the Seattle Sounders, Minnesota would have lined up against Columbus in the MLS Cup final.

With success comes expectation. It’s silliness to think one MLS season is informative of what will happen in the next. Just ask the Columbus Crew, reigning champions currently on the outside of the Eastern Conference playoff field. Still, all of us are guilty of that silliness. According to preseason predictions, United was going to cruise into the playoffs and again contend for the Western Conference crown.

It helps to have your best players on the field. Heath’s lament about the predicted “demise” of his team might be more about frustration around player absences and some bad luck than media bias against his team.

Both Emmanuel Reynoso and Robin Lod returned to action for the match against the Galaxy, a major boost for a team that was just throttled 4-0 by Sporting Kansas City on Wednesday. Reynoso wasted no time taking over, scoring two goals and assisting on a third.

To this point, Reynoso hasn’t been the otherworldly player he was in 2020. However, Saturday’s performance shows he’s capable of again carrying the Loons into the playoffs and deep into the tournament. Minnesota is still no one’s favorite and still has plenty to prove. However, if this is an awakening for Reynoso, United will be a force before the season is over.

“Do you think that Chicharito makes a difference for LA? Do you think that Vela makes a difference to LAFC?” Heath said about his playmaker. “You could go through all the teams in the league. When the best players are not available and fit, it affects the rest of the group. Maybe, are we too reliant on Rey? We’ll see. Because, you know the way he plays, and I thought again tonight he took a lot of harsh treatment in the first half. And if he can get protected, which we need him to be on the field, then we feel as though he’ll have a big influence for us from now to the end of the year.”

Reynoso will need to be a big influence if Minnesota is going to cement a playoff place. Lod, too, could help the club score the goals necessary to finish in the top seven in the West.

A peek at the advanced statistics for United shows a team beset by misfortune. Only a handful of clubs across the league have scored fewer goals than the stats say they should have than the Loons. While coming up with the reason for that can be difficult, luck is undeniably a factor.

Minnesota has to finish the chances it creates and take full advantage of Reynoso’s abilities. If a few breaks go their way, the Loons will not only kill any notion of their demise, they might climb back into the discussion for MLS Cup glory. With that in mind, Heath wants to see his star be more selfish.

“I keep saying he should score more goals. He has so much talent, Heath said. “He takes as much pleasure out of making goals, assisting goals, as he does scoring,” Heath said afterward. “He’s got to change that. Because he’s always been able to find people and pick passes, but he’s a really, really good finisher. And he should take more shots. And that’s something that we’ve been encouraging him to do.”

Five years into his tenure as their coach, Heath’s “lack of respect” talk is a regular part of the show in Minnesota. When the Loons finally broke through and made the playoffs in 2019, Heath underlined the success then complained about a lack of respect for his team from national media, specifically the league’s website.

There is some truth to the notion that the national conversation can sometimes overlook a team playing in the middle of the country. Minnesota United doesn’t have the flashy stars of some of the clubs on the coast. They’re not playing in front of crowds of over 50,000.

That takes nothing away from a strong home-field advantage at Allianz Field and game-changing players who might be peaking at the perfect time. The numbers show that creating chances isn’t their problem. Working to ensure they don’t fall behind and find themselves chasing games will go a long way towards helping them pick up the points they need to make a postseason appearance this year.

“We had to ride our luck and we had to defend at times, but really, really pleased with the attitude of the players,” Heath said after Saturday’s win. “They couldn’t have done any more. And it’s incredible that when you get your best players on the field, good things happen. Maybe people should think about that when they write some of the stuff that they do.”

The demise of Minnesota United is not as great as some people in the media seem to think, according to the club’s coach. If letting everybody know that now helps push his team up the table over the remaining ten games of the season, that’s Heath doing his job.