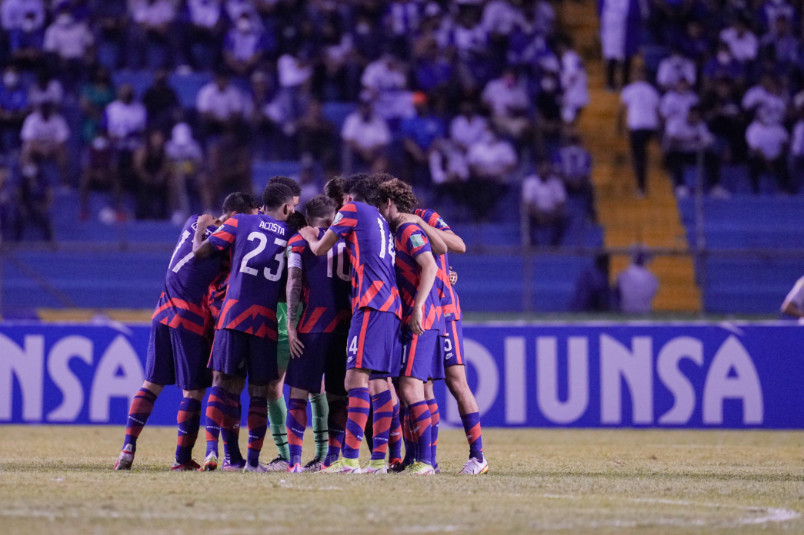 By Charles Boehm – WASHINGTON, DC (Sep 10, 2021) US Soccer Players – The final round of Concacaf World Cup qualifying feels a bit different this time around. Delayed many months by the pandemic, it’s now packed into three-match windows, expanded from six teams to eight, and leads up to a fall tournament instead of a summer one.

It’s not just the new schedule. CBS is now the home of the English language coverage for all away games involving the USMNT. Whether on the CBS Sports cable network or their Paramount+ streaming service, a comprehensive broadcast rights deal with Concacaf means plenty of coverage across the region. That’s almost unheard-of for those interested in all of Concacaf. A major US media outlet has invested significantly to put the focus on the region.

These games and thousands of other entertainment offerings can be had for about the monthly cost of an espresso drink or two. They’re sandwiched by studio shows headlined by USMNT alums Charlie Davies, Clint Dempsey, and Oguchi Onyewu alongside accomplished host Kate Abdo. Maurice Edu was on studio and commentary duty for the game broadcasts. Jenny Chiu and others reported from on-site, while contributors checked in from elsewhere in the region.

As they showed in their debuts at the Concacaf Nations League knockout rounds in June, this crew is mostly freed from the tight constraints of the typical eight-to-20-minute pregame show on ESPN and other cable channels. They’ve adopted the casual, freewheeling tone set by Micah Richards, Peter Schmeichel and the rest of CBS’s UEFA Champions League presenters over the past year, shepherded expertly by Abdo, to generally positive reviews.

The former teammates riffed on the current USMNT, Concacaf’s path to the World Cup, and their own past experiences with both. Enjoyable sidetracks included critiques of one another’s trademark goal celebrations in the wake of Antonee Robinson’s joyful backflip in San Pedro Sula. To underline ViacomCBS’s commitment to the project, such shoulder programming also aired around USMNT vs Canada in Nashville even though the game itself was on another network.

The dramatic 4-1 comeback win over Honduras, keyed by Ricardo Pepi and several other young players, was a massive result not only for the USMNT and their qualification prospects. It was good news for Paramount+, who, like their studio analysts, make no secret of their pro-US rooting interests.

“I had a great night. I think in terms of the football, that was the way we wanted to end the window,” Abdo said in a media call the next day, praising her ex-USMNT colleagues as quick studies when it comes to TV work. “Because it feels like you ended with a sense of hope, now looking forward to the next window. So you come back into October feeling like this is a team that can achieve something, rather than that sense of dread and worry of what happens next, and how does this progress?… Given that we’re only five shows in it, I feel like we’re in a great place for that show.”

It adds up to a hefty statement of intent from the newest big player on the US soccer media scene, where even a small dose of competition can go a long way.

“It’s an audience demo that lines up very well with streaming and streaming distribution. And our vision is to make Paramount+ a must-subscribe for soccer fans,” said CBS Sports Digital’s Jeffrey Gerttula. “It’s why we’ve filled it with 2,000-plus matches across multiple leagues where we’re really trying to make it so that soccer fans enjoy it, that it brings more soccer together and they can get everything in one place. Where you can get every Champions League match, you can get every Serie A match, you can get the bulk of Concacaf qualifiers, everything with the exception of US men’s national team home matches. It’s all there and we think it’s a very, very good value.”

The network gathered several leading executives and on-air talents on the call to trumpet their plans for Serie A, Champions League, Europa League, and Europa Conference League coverage, and look back on their first year of all out soccer business. ViacomCBS, an industry giant with upwards of $25 billion in annual revenue now also holds the rights to NWSL, the Scottish, Brazilian, and Argentine leagues and competitions from 145 national associations in all.

“Sports and particularly soccer is a key pillar for Paramount+, and our soccer coverage really is a key part of that,” noted Gerttula. “It’s outperformed our expectations so far. It has been one of the top acquisition drivers for new Paramount+ subscribers.”

Long associated with an older viewership and a focus on red-meat sports products like NFL, college basketball, and golf, CBS sees soccer as its ticket to the next generations.

“We went from zero to 100 in a very short period of time,” said CBS Sports chairman Sean McManus. “But that was because, having done so much research and so much analysis, that we thought if we’re going to hitch our wagon to a particular sport for Paramount+, soccer is the ideal wagon to hitch ourselves to. We talked about the demographics, we talked about the younger audience. We talked about how avid soccer fans are. So it was a strategy that Jeff and his team really thought out and they identified soccer as a big opportunity for us.”

One catch. For now at least, the beautiful game will make only cameo appearances on the main CBS over-air channel. That’s the nation’s most-watched network for 13 years running according to Nielsen ratings, with more than 6 million prime-time viewers on average. Gerttula and his fellow executives made clear that this is a streaming play first and foremost. That may bring disappointment for fans eager for games to be more accessible to new and casual audiences.

“Linear [TV], while very important, linear is additive,” said Gerttula, while insisting that soccer is not a “niche sport” to the network. “It has to support it. We want to do more linear exposures but it has to make sense, both to the consumer, but also to the core business model that we’re trying to drive. So anyway, it’s very much viewed as broad-based, we’re in something that we think is growing, something we think is massive in its reach, and something that we think is really core to our streaming ambitions.”

Having big USMNT games and thousands of other quality soccer matches accessible on Paramount+ for a relative pittance feels like progress to those of us who suffered through the grainy Hexagonal feeds of old. It’s also a reality check on the vision of soccer becoming a mainstream TV sports power player.

At the same time, the definition for what that means is changing. Paying by the month for streaming services is now normal regardless of age group. So is expecting to find what you want to watch available somewhere. That has the major networks stocking their streaming services with a lot of sports normally hard to find on cable. Soccer’s old status as “the sport of the internet” may end up looking like the future.