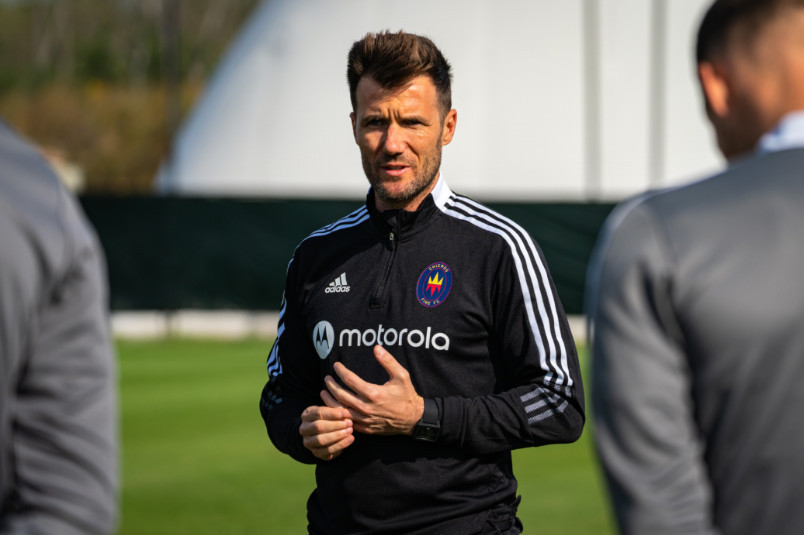 Thursday’s soccer news starts with another coaching change in MLS. The Chicago Fire “parted ways” with Raphael Wicky following a 2-0 home win over NYCFC at Soldier Field. Robert Beric scored in the 48th and Federico Navarro doubled the lead in the 66th. Chicago goalkeeper Gabriel Slonina made two saves to keep the clean sheet. The Fire is in 12th-place in the East a dozen points out of the playoff picture. Frank Klopas takes over as interim coach.

“I’d like to thank Rapha for his tireless efforts to make us a better club each day,” Chicago sporting director Georg Heitz said in the press statement announcing the move. “We felt this was the right time to notify him that we will not be exercising his 2022 contract option, as we begin to make decisions for next season. Rapha will always be a part of the Fire family, and we wish him all the best for the future.”

New England won 4-1 at Montreal. DeJuan Jones opened the scoring for the Revs in the 10th minute and Adam Buksa doubled the lead in the 17th. An own-goal made it 3-0 New England in the 30th. Joaquin Torres pulled a goal back for Montreal in the 32nd. New England’s Gustavo Bou finished off the scoring in the 86th minute.

DC United beat Minnesota 3-1 at home. Ola Kamara converted a 23rd minute penalty for DC with Minnesota’s Bakaye Dibassy equalizing in the 40th. Julian Gressel put DC up for good in the 45th and Junior Moreno scored in the 85th. The Red Bulls and Philadelphia drew 1-1 at Red Bull Arena. Sergio Santos put the Union up in the 17th and Omir Fernandez equalized for New York in the 37th minute.

Sporting Kansas City beat Dallas 3-1 on the road. Daniel Salloi scored for Sporting in the 13th. Playing a man up from a Bryan Acosta red card in the 52nd, Johnny Russell converted a 55th minute penalty for Sporting and Salloi scored again in the 61st. Nashville and Orlando drew 2-2 at Nissan Stadium. Hany Mukhtar (11th) and Randall Leal (59th) scored for Nashville. Orlando’s comeback started with a Daryl Dike penalty in the 76th. An own-goal three minutes into stoppage time leveled the score.

Portland won 2-1 at LAFC, taking the lead from a Yimmi Chara goal in the 45th minute. LAFC’s Daniel Musovski equalized in the 55th, but a 59th minute Dairon Asprilla goal sent the three points Portland’s way. Week 28 concluded in San Jose where Seattle picked up a 3-1 win. Raul Ruidiaz scored for the Sounders in the 25th and converted a 59th minute penalty. Cristian Roldan added a Seattle goal in the 49th. Seattle gave up an own-goal in the 51st minute.

Columbus beat Cruz Azul 2-0 at Lower.com Field to win the 2021 Campeones Cup. An own goal put the Crew up in the 4th minute and Jonathan Mensah scored in the 74th. MLS has now won all three Campeones Cups with last season’s canceled due to the pandemic.

In the Champions League, Jordan Pefok subbed out in the 66th minute of Young Boys’ 1-0 loss at Atalanta. The goal came in the 68th minute. Brenden Aaronson’s Red Bull Salzburg beat Timothy Weah’s Lille 2-1 at home. Karin Adeyemi converted Salzburg penalties in the 35th and 53rd minutes. Lille pulled a goal back in the 62nd. Weah subbed out in the 59th minute. Sergino Dest’s Barcelona lost 3-0 at Benfica. The goals came in the 3rd, 69th, and from a 79th minute penalty. Barcelona’s Eric Garcia saw red in the 87th. Dest saw yellow in the 78th.

Tim Ream’s Fulham beat Swansea City 3-1 at home in the Championship. Aleksandar Mitrovic put Fulham up in the 12th, scoring again in the 32nd. Swansea scored in the 38th, but it was Mitrovic finishing off his hattrick in the 45th minute. Antonee Robinson wasn’t in the squad for Fulham. Ethan Horvath was on the bench for Nottingham Forest’s 3-1 loss at Barnsley. Trailing from a 20th minute penalty, Forest came back with goals from Philip Zinckernagel (61st), Brennan Johnson (68th), and Lewis Grabban (81st).

Photo by the Chicago Fire