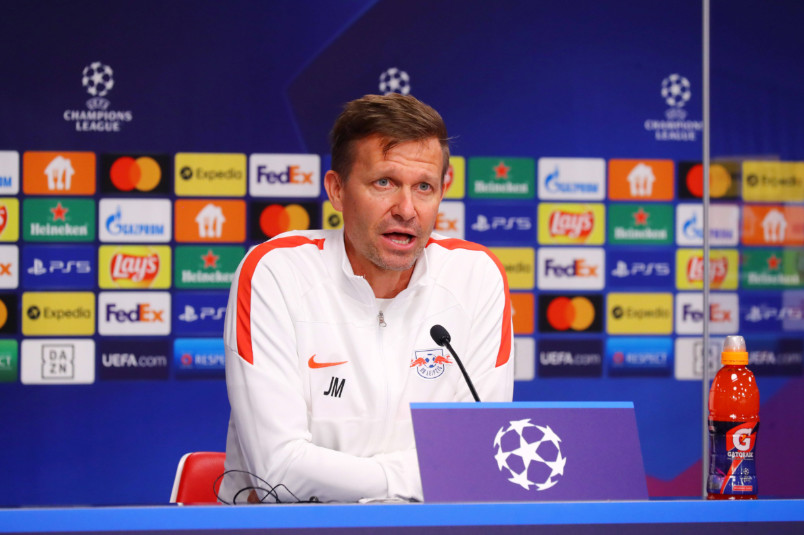 Tyler Adams subbed on in the 78th minute of RB Leipzig’s 2-1 home loss to Club Brugge in group A of the Champions League. Christopher Nkunku scored for Leipzig in the 5th minute. Club Brugge equalized through Hans Vanaken in the 22nd and Mats Rits scored in the 41st. Owen Otasowie wasn’t in the squad for Club Brugge.

“We managed to take an early lead, but the rest of the first half was hectic. We lost a lot of balls and didn’t play well. I told the players at half time to stay calm. In the second half we were better and more composed. We could have turned the game around, but unfortunately didn’t get the goals. At the moment we’re either really good or not good. We need to find more consistency.”

In the other group A game, Zack Steffen was on the bench for Manchester City’s 2-0 loss at PSG. The goals came in the 8th and 74th minutes.

“Maybe we were a little less aggressive in our first actions for the quality of the players that we have, but in general it was a fantastic game,” Manchester City manager Pep Guardiola said. “We did everything, I didn’t see the stats but I think we created enough chances to score.”

Gio Reyna is recovering from an injury picked up on international duty and missed Borussia Dortmund’s 1-0 home win over Sporting in group C. Donyell Malen scored the game’s only goal in the 37th minute and Dortmund goalkeeper Gregor Kobel made one save. In group C’s other game, Ajax shutout Besiktas 2-0 at home. Ajax and Borussia Dortmund top the group on six points with Ajax ahead on goal difference +6 to +2.

Duane Holmes subbed on in the 81st minute of Huddersfield Town’s 3-2 home win over Blackburn Rovers in England’s Championship. Alejandro Vallejo scored for Huddersfield in the 36th with Blackburn equalizing in the 57th. Daniel Ward returned the Huddersfield lead in the 60th, but a 65th minute penalty leveled the score. Ward scored again in the 84th minute.

“For me, the team showed a very good personality, tempo and intensity,” Huddersfield Town coach Carlos Corberan said. “When you score the goal and they draw, you need to have a lot of personality to give and go again in the game – and this is something that I feel very proud of my players for today. They showed a level of determination and confidence in themselves to continue going and push for the games.”

In League One, Lynden Gooch wasn’t in the squad for Sunderland’s 5-0 home win over Cheltenham Town. Baily Wright opened the scoring in the 11th minute and Ross Stewart added goals in the 28th and 38th. Luke O’Nien (65th) and Leon Dajaku (66th) finished off the scoring.

FourFourTwo’s Ed McCambridge tells the Sheriff Tiraspol story after they beat Real Madrid in the Champions League. Football365’s Dave Tickner puts the focus on the bigger picture. The Telegraph’s Sam Wallace asks about the state of La Liga.