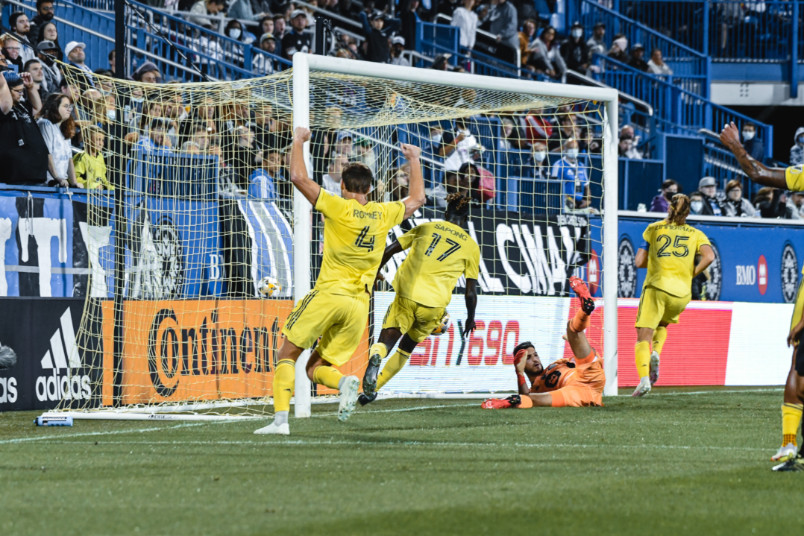 By Jason Davis – WASHINGTON, DC (Sep 15, 2021) US Soccer Players – If we’re being honest, MLS is a league full of dark horses. You know that old sports cliche, the one meant to describe an underrated team that everyone knows is competent, but no one is sure can win. The history of the phrase “dark horse” goes back to the early height of horse racing in Britain, when horse bettors knew little about pushed to an unexpected victory.

These days, the term is a pop culture staple. There’s a comic book imprint, a Katy Perry song, and many references in print, movies, and sports.

In a soccer league that leans so heavily on enforced parity, it’s not exactly right to say any club is a clear favorite entering a new season. With margins that thin, any team that “overachieved” is more a product of overstated differences between clubs than a real difference in talent.

Yet, there’s no better label for two teams resolving into true contenders at the three-quarters pole of the 2021 MLS regular season. Enough of the season is in the books to judge teams capable of lifting the MLS Cup come December 11. No list of those teams would be complete without Nashville SC and the Colorado Rapids.

In fairness, both teams reached the playoffs in 2020, meaning their success this season can’t be a complete surprise. It’s the step forward for each in 2021 that catches the eye. While Nashville and Colorado arrive at this moment via very different paths, there is some commonality in their respective approaches to competing in MLS. That connection will tie them together should they defy the odds and face off in an MLS Cup final come December.

Nashville has a shorter history and can fairly be called the bigger surprise. A 2020 expansion team forced to make its way in MLS during that Covid-wracked season, they’re bucking the odds in year two. Following an eyebrow-raising inaugural season that included two playoff wins, Nashville improved for its encore performance by adding firepower to a previously underwhelming attack.

This is not LAFC or Atlanta United, two recent expansion clubs that brute-forced their way to relevance by spending big on known talent and rising stars. Nashville also avoided FC Cincinnati and Inter Miami’s various issues.

Mike Jacobs is the architect of Nashville’s roster after learning the league working with Peter Vermes in Kansas City. Building on a core of high-quality MLS veterans like Dax McCarty, Walker Zimmerman, Daniel Lovitz, and Anibal Godoy, Nashville added a set of reasonably priced and smartly scouted foreign signings. It’s a lesson in how important a cogent plan is from day one.

Head coach Gary Smith took Nashville into MLS after guiding the USL club. Smith famously won the 2010 MLS Cup with Colorado, earning a reputation during that season as a uber-defensive coach with no real interest in setting his team up to play with the ball.

Smith’s Nashville team changes that perception. Though the Rapids of a decade ago were notoriously tough to enjoy, Smith did his job by winning. In 2021, he’s showing what he can do when given the tools necessary to play good soccer on both sides of the ball.

This year’s Nashville team can score goals. The club has put the ball in the net 38 times in 23 games, good enough for the fourth-best goals-per-90-minutes number in all of MLS. Coupled with a stout defense, Nashville’s stronger attack makes the club a real contender.

It helps when you Designated Players live up to their contracts, as midfielder Hany Mukhtar is in 2021. He has the league’s best goals-plus-assists total and will likely garner MVP votes at the end of the season. Meanwhile, Smith’s former team is doing its own dark horse act under head coach Robin Fraser.

It’s not unfair to say that the Rapids were little more than an afterthought around the country for most of the decade since their MLS Cup championship under Smith. Colorado consistently ranks near the bottom of the league for total payroll. They rarely spend the type of seven-figure transfer fees that are now common in MLS.

For most clubs, that approach would mean a decided lack of success in the standings. For the Rapids, it’s merely an interesting fact about a team sitting on the Western Conference’s second-best points-per-game total with fewer than a dozen games remaining on the schedule.

The x-factor is Fraser, a former MLS playing great who waited years to get another shot as a head coach following a stint at Chivas USA from 2011 to 2012. His arrival in Colorado turned a ragtag collection of journeyman players and budding professionals into a competent side capable of beating anyone. It also represented the coming-to-fruition of something the club called “The Rapid Way,” long-touted but not delivering.

With the club’s academy producing players like Cole Bassett and Sam Vines, fans can dream of more than a lightning-in-a-bottle campaign. Vines has already left for Europe, but that’s the game in this league.

It’s the MLS veteran group making the Rapids go. Utilizing the counterattack with players like Jonathan Lewis, Michael Barrios, and Diego Rubio, Colorado will keep any opponent honest. Organized team defending, often with a trio of center backs, keeps them in games.

Colorado won’t blow anyone out of the water, but they don’t need to. Confident in their approach, they’re dangerous in a competitive Western Conference. Though the Rapids don’t need home field advantage to win, the altitude at Dick’s Sporting Goods Parks would provide a home edge come playoff time.

The odds remain stacked against Nashville SC and the Rapids when it comes to winning MLS Cup. That’s not because they aren’t individually good enough. Both certainly are. Instead, it’s because MLS always arrives at the end of the regular season with a handful of clubs all equally capable of lifting the trophy. It’s a league full of dark horses, after all.