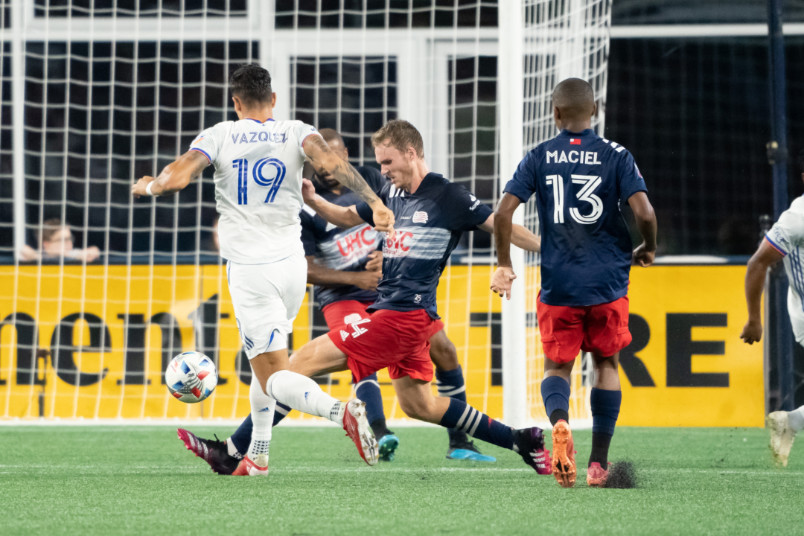 By Clemente Lisi – NEW YORK, NY (Sep 20, 2021) US Soccer Players – One of the biggest knocks against MLS has always been that teams don’t know how to defend. Why this is such a regular criticism depends on your take on Major League Soccer. Those who are down on MLS blame it on the quality of players. Those who support the league argue that teams would rather emphasize offense. The truth, of course, lies somewhere in between these two polarizing statements.

This is where soccer fans can be fickle and pundits contradictory. Both love goals but bemoan when defenders get beat. In a sport that prioritizes and highlights goals, defending can be tricky to assess and even enjoy. So how does one credit defending when it impedes scoring, which is considered the game’s lifeblood?

Over the past few months, we have witnessed some high-scoring MLS games, most notably DC United’s 7-1 thumping of Toronto FC in July and the Seattle Sounders’ 6-2 rout of rivals Portland Timbers a month later. Despite those results, MLS averaged 2.75 goals per game in 2021, down from last season’s 2.84. As recently as 2018, MLS averaged 3.19 goals per game, the second-highest in league history.

What we can make of those numbers is an open question. We may be seeing the summer of the defender in MLS, or it may be a new median teams will have to address. Whether or not it’s a good thing for the league is another question where we lack the information to really say. It could show the kind of defensive pressure that leads to closer games. That speaks to the parity the league stresses. There have been enough breakout games with plenty of goals to satisfy the neutral fan. It’s more about whether or not those games are the ones ending up in the national television slots.

It could be the pandemic – what hasn’t been impacted by it? – and the inability of some MLS teams to sign attack-minded players for the sudden scoring slump. There’s also the injury issues for some of the league’s best strikers. Most notably, that list includes the 2020 league MVP Alejandro Pozuelo of Toronto (he’s played only 13 games this year) and Seattle’s Nicolas Lodeiro (who has appeared in just seven).

Instead of “goals are down in MLS” headlines, why not focus on improved defending? That is a factor as the league continues to develop. Defending certainly matters in MLS. This isn’t a run-and-gun league where the focus is so heavily tilted towards offense that the tactics turn to scoring enough. There are plenty of lockdown defenses by design in this league.

By contrast, the plethora of goals we saw just last week in the opening matchday of the UEFA Champions League was widely lauded as an example of offensive and exciting soccer.
Manchester City’s 6-3 win against Jesse Marsch’s RB Leipzig was a prime example of this take. A similar outcome in an MLS game would have certainly unleashed Twitter reactions about the poor state of defending.

Let’s look at the New England Revolution, the team with the most points in the league so far this season. In 26 league games, coach Bruce Arena’s side has utilized a 4-2-3-1 formation and conceded 30 goals. That isn’t even the least of any team in the league, although it’s hard to make a proper comparison due to the unbalanced schedule. Nonetheless, it’s the Sounders who have surrendered just 20 in 24 games. In the case of both New England and Seattle, the defense is heavily involved in the offensive buildup.

The Revs have found success in scoring tons of goals and winning big games. It has also been top-notch defending pushing New England forward in 2021. Their back four has Andrew Farrell and DeJuan Jones, showing the quality of MLS defenders. Then there’s the fine play of goalkeeper Matt Turner, who helped the US win the Gold Cup this past summer. All are factors.

“I think you look to last year as well and we were pretty defensively resilient for most of the year,” Turner told MLSsoccer.com in June. “Our big Achilles heel was defending set pieces. We’ve shown a little bit of that this year where we haven’t been too, too convincing on set pieces at times. However, we have the same people that were here last year – a very similar back four, and guys rotating in and doing a great job so we understand what it takes to be successful in this league and be tough to break down through the run of play.”

The Sounders, meanwhile, have also proven that a great defense can help a team succeed while using a 3-5-2 system. While a back four remains the norm in MLS, coach Brian Schmetzer’s shape adjustment has made the defense strong and forced the midfield to play a greater possession game.

Schmetzer’s tactical flexibility is worth acknowledging. He has adapted something key for any MLS coach since the games go on through major international tournaments. That means players have to leave MLS for weeks at a time, not to mention those who transfer to a European club in the middle of the summer or succumb to injury. Under such scenarios, the system must dominate over any individual player. In Schmetzer’s case, that means having a few tactical formations at his disposal depending on which players are available. In that sense, a strong defensive shape is only going to prove helpful.

The Sounders’ three-man backline has made for a very interesting tactical switch. In March, Schmetzer had said that the rationale for the changes was, in part, an effort to “always try to… maximize each players’ skillset within a tactical formation. It’s always my intent to get the
players to work well as a collective within whatever formation we end with. That’s always the goal for me. It’s not numbers on a whiteboard, that’s not what’s most important.”

MLS is often in a no-win situation. We all love goals, but seeing teams compete for the title while focusing on better defending is a positive sign that this league is maturing tactically. Let’s continue to celebrate scoring, but don’t overlook why the top teams also need a strong defense to succeed.