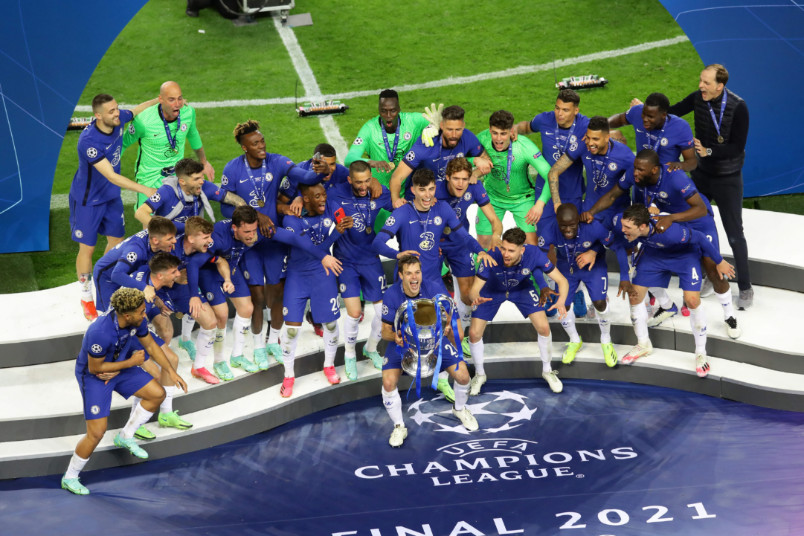 By J Hutcherson (Sep 14, 2021) US Soccer Players – The quickest and obvious way to look at the 2021-22 Champions League is that it’s PSG’s to lose. Their triple-forward lineup of Neymar, Kylian Mbappe, and Lionel Messi should make life difficult for every team they play. Sure, if it really was that easy Real Madrid in the Galacticos era would’ve won more trophies, but PSG right now may be the strongest team in Champions League history. That it could be one and done should Mbappe end up at Real Madrid next season only adds to the pressure.

Given what we’ve seen over the last few Champions League seasons, it’s tough to write in any team as a clear favorite from the beginning. Part of the issue at Barcelona is that their version of a Messi-powered super team last won the tournament in 2014-15. Without claiming the title, the team and the economics necessary to maintain it, became a serious issue. We now know how much Barcelona could afford, the situation that created Messi’s move to PSG.

That didn’t necessarily reset expectations. Neymar was an earlier attempt for PSG to build a Champions League winner. The 1-0 loss to Bayern Munich in the 2019-20 final, a bubble tournament behind closed doors to get the games in last August, was a unique circumstance. Last season ended with a semifinal loss to Manchester City, but it came after PSG knocked out Barcelona and Bayern Munich. That suggests a team pushing towards something bigger with the key players they already had. So add Messi, and push those expectations so high that they’re almost a foregone conclusion.

Manchester City is in group A with PSG, giving them two games against another team in that small group of contenders. RB Leipzig and Club Brugge may seem like they’re making up the numbers, playing for 3rd-place and a drop to the Europa League knockout round. It’s worth the reminder that Jesse Marsch is coaching a Bundesliga contender, but that only means so much against the kind of teams City and PSG are likely to field.

PSG hosts Manchester City on September 28, and it’s City’s turn on November 24. By that second game, the scope of the group and the broader tournament should already be clear. Whether or not the tournament flows through group A is the question, especially with other teams also reloading.

Top of that list is Manchester United, the new home of Cristiano Ronaldo. United has a relatively easy schedule in group F against Villarreal, Atalanta, and Young Boys. Taking things as a given in the Champions League group stage is this strange combination of potentially overplaying the level of competition and downplaying the ability of strong teams to mess up. There are more than enough examples of favorites taking full advantage to downplay the likelihood of multiple upsets.

A knock-on effect of Ronaldo’s move to United is his old club in group H. Juventus is struggling, but they’re one of the two favorites in group H regardless. Chelsea is the other, both slotting in ahead of Zenit St Petersburg and Malmo. Juventus vs Chelsea on September 29 is probably too early to know if the home side has worked out its issues. The expectation is that they will since it’s tough to see them as a struggling Serie A club for very long.

Ronaldo’s older club is in group D with Real Madrid the favorite after a summer clearout at Italian champions Inter Milan. Barcelona in group E with Bayern Munich is another group with two clear favorites. Barca’s reworked roster isn’t likely to create an opening for Benfica or Dynamo Kyiv.

Last season’s runners-up Liverpool is in group B with Atletico Madrid, Porto, and an emerging AC Milan. Three games into the Serie A season, and Milan is already showing that they’re a stronger club this season. That adds to the pressure when Atletico is the defending La Liga champions. Liverpool is in a situation where game management takes on more importance with a first and final matchday against Milan.

“I think when we all saw the draw not one of us said, ‘Oh my God, what a great group, let’s go for it!’,” Liverpool manager Pep Guardiola said. “It’s just a tough group, come on, we don’t have to lie. Atletico, wow. Porto, usually champion in Portugal, if not then second, so top, top team. AC Milan, big history, in the best moment for years. So yeah, that’s proper Champions League.”

This would normally be where we talk about disruption and spoilers, but not this time around. The Champions League favorites separated themselves by another summer of spending. The entirety of the transfer market may have been way down, but the teams that had the money took as much advantage as possible. Had Real Madrid pulled off that move for Mbappe, it may have opened up two of the groups a bit, but this tournament is still mostly about the top teams playing for seeding.