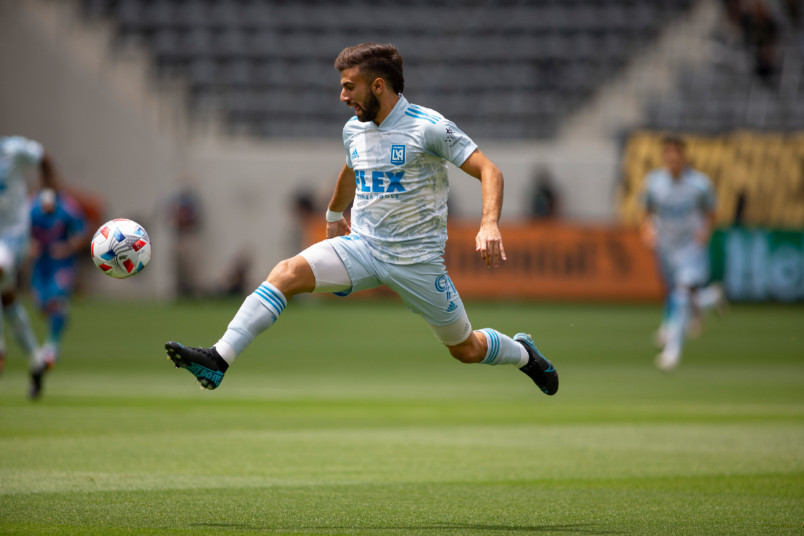 By Jason Davis – WASHINGTON, DC (Sep 3, 2021) US Soccer Players – This is an end for LAFC. An end of sorts, anyway. Half of the attacking duo that burned up Major League Soccer is gone. The club announced that Diego Rossi joined Fenerbahce of the Turkish SuperLig on loan ahead of the close of the summer transfer window.

“It’s an exciting day for LAFC, it’s the fulfillment of a plan and vision in place from day one,” LAFC president John Thorrington said. “To identify young talent, develop that young talent and move them on in a way that’s beneficial for both the player and the club. It’s not lost on us that Diego was the first player a part of that vision. He was signed with this exact plan in mind.”

What it also represents is a major test for what is essentially still a new club.

Rossi’s departure from Los Angeles was inevitable the moment he arrived from Penarol in his native Uruguay. LAFC’s move into the South American player market mirrored Atlanta’s, arriving in MLS a year earlier and making a splash with signings like Paraguayan forward Miguel Almiron.

Flush with ambition and cash, LAFC’s leadership got aggressive from the very beginning. Mexico star Carlos Vela became the club’s first signing. Adding Rossi felt like a shot across the bow for the rest of MLS. Rossi didn’t have Vela name recognition or resume playing in one of Europe’s top competitions, but his potential was immense.

LAFC purchased Rossi’s rights to win an MLS Cup as soon as possible. With the league becoming more involved in the business of buying and selling players, LAFC had another aim when it grabbed Rossi: Make money.

Rossi’s time in MLS was equal parts “help LAFC win” and “develop as a player.” Eventually, that would catch the attention of rich clubs in Europe. That’s what happened. It’s fair to say that Rossi was the league’s most talked-about prospective sale over the last few seasons.

With that talk came a healthy price. Rossi fell into the same category as Almiron when numbers came up, the presumption being that LAFC would cash in on their starlet a year or two into his MLS career. Rossi’s output fed the hype.

In his and LAFC’s first season in MLS, Rossi scored a dozen goals with Vela adding 14. LAFC bucked the usual trend and qualified for the Western Conference playoffs as an expansion team before losing to Real Salt Lake in the first round.

2018’s disappointment only increased the appetite for success. In 2019 LAFC went on to set or tie regular-season records for points and goals scored, in the process playing some of the best soccer the league had ever seen. Individually, Rossi thrived, increasing his scoring output to 16.

By that summer, interest in Rossi hit a fever pitch. Rumors linked him with big deals, but LAFC never made a move. Instead, Rossi stayed. That created an opportunity last season to show what he could do without Vela.

Rossi’s seven goals at MLS Is Back (five in the group stage and two in the knockout rounds) set the stage for a Golden Boot in the truncated 2020 season. For the moment, his star was again on the rise. When Vela returned to the team after the MLS moved back to home stadiums, the duo reconnected.

Unfortunately for LAFC, Rossi missed the playoff rematch with the Sounders in the first round due to injury. Rossi was back with Vela for the Concacaf Champions League tournament played in Orlando due to the pandemic. They came up just short of a continental title, though there was solace in the notion that 2021 would bring the club more success.

That hasn’t happened. As September arrives, LAFC is on the outside looking in for the playoffs. Vela is injured. While Brian Rodriguez took a step forward with a commanding performance against the Galaxy in a rivalry game, the best LAFC could do was a draw. There’s a lot of work to do to get back into the upper echelon of MLS. That work only gets harder with the departure of Rossi.

LAFC seems confident Fenerbahce will pick up the buy option for an undisclosed fee. They’ve already begun the search for a Designated Player to replace Rossi.

For LAFC, this is a crucial moment. Vela’s contract is up at the end of the season. There’s always a chance he doesn’t agree to a new deal. Getting the next signing right might play a role in keeping the marquee player in town. The measure of a club is its ability to navigate these transitional moments.

It’s now LAFC’s tun to show how that works for them. They always knew that Rossi leaving is part of the plan. That time is now. For LAFC, it must also be a new beginning.