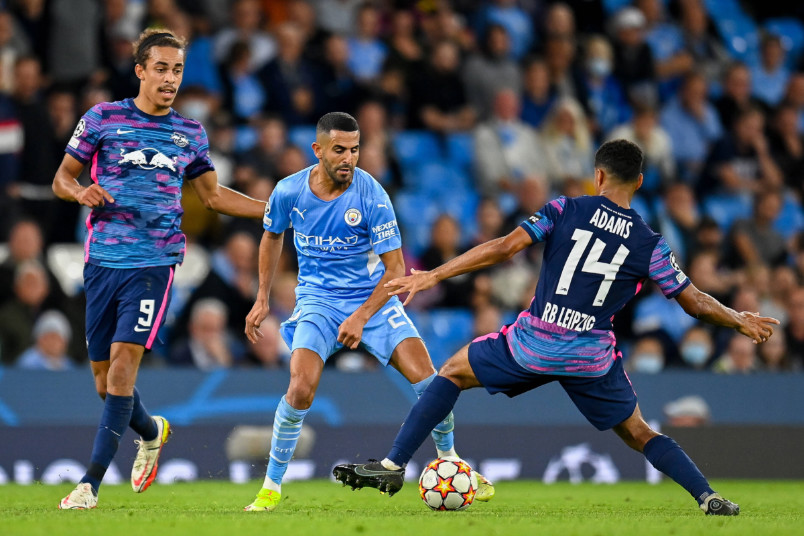 Thursday’s soccer news starts with the Champions League where Tyler Adams’s RB Leipzig lost 6-3 at Manchester City. Nathan Ake put City up in the 16th and an own-goal doubled the lead in the 28th. Christopher Nkunku pulled a goal back for Leipzig, but a first-half stoppage time penalty from Riyad Mahrez made it 3-1 City. Nkunku scored again in the 51st. City’s Jack Grealish added a fourth goal in the 56th. The two clubs traded goals again when Nkunku completed his hat-trick in the 73rd and Joao Cancelo scored for City in the 75th. Leipzig went a man down in the 79th after a red card to Angelino. Gabriel Jesus finished off the scoring for City in the 85th minute. Zack Steffen wasn’t in the squad for Manchester City.

“We wanted to sit deeply but also defend aggressively,” RB Leipzig coach Jesse Marsch said. “In the first-half we lacked the latter, were almost never aggressive and had little intensity against the ball. That played into Manchester City’s hands. They were able to play their game, work with switches and crosses.”

Owen Otasowie wasn’t in the squad for Club Brugge’s 1-1 home draw with PSG. Falling behind in the 15th minute, Hans Vanaken equalized for Club Brugge in the 27th. Gio Reyna wasn’t available for Borussia Dortmund in their 2-1 home win over Besiktas. Jude Bellingham put Dortmund up in the 20th and Erling Haaland doubled the lead late in first-half stoppage time. Besiktas scored four minutes into stoppage time.

“It was a brilliant atmosphere,” Bellingham said. “It was an honor to play in front of so many fans again. But the most important thing is that we won the game. That was our job today. It went back and forth, a bit like basketball. We were a little cleaner and we won the game.”

Tim Ream’s Fulham beat Birmingham City 4-1 on the road in the Championship. Denis Odoi put Fulham up in the 10th and Aleksandar Mitrovic converted a penalty in the 44th. Harry Wilson made it 3-0 in the 54th and Mitrovic scored again in the 83rd minute. Birmingham City converted an 87th minute penalty. Antonee Robinson was on the bench for Fulham. Ethan Horvath’s Nottingham Forest lost 2-0 at home to Middlesbrough. The goals came in the 24th and 72nd minutes.

Philadelphia exited the Concacaf Champions League to Club America 4-0 on aggregate after a 2-0 loss at Subaru Park. Club America scored in the 79th and three minutes into stoppage time. Both teams put five shots on goal with the Union holding 59% of possession. The result means that two Liga MX clubs will play for the Concacaf Champions League title.

DC United shutout Chicago 3-0 at Audi Field. Ola Kamara converted penalties in the 9th and 35th and completed his hat-trick in the 44th minute. DC goalkeeper Bill Hamid kept the clean sheet with one save.

Montreal beat Orlando 4-2 on the road, taking the lead in the 18th minute through Mathieu Choiniere. Playing a man up from a Nani red card in the 35th, Montreal’s Romell Quioto made it 2-0 in the 37th. City pulled a goal back when Robin Jansson scored in the 40th and equalized through Ruan Teixeira in the 63rd. Club de Foot saw the game out with goals from Lassi Lappalainen (73rd) and Sunusi Ibrahim (80th). City’s Andres Perea saw red in the 83rd minute.

Sporting Kansas City shutout Minnesota 4-0 at home. Khiry Shelton started the scoring in the 14th, Daniel Salloi made it 2-0 in the 36th, and Johnny Russel converted a 45th minute penalty. Cameron Duke finished off the goals in the 52nd. Sporting goalkeeper Tim Melia kept the clean sheet without having to make a save.

Real Salt Lake beat San Jose 4-3 at PayPal Park. Javier Lopez put the Earthquakes up in the 26th with Rubio Rubin equalizing in first-half stoppage time. Albert Rusnak gave RSL the lead in the 49th, but Lopez equalized a minute later. Lopez finished his hat-trick in the 65th. Justin Meram equalized for RSL in the 71st and Rubin scored again in the 81st minute.

The LA Galaxy and Houston Dynamo drew 1-1 in Carson. Fafa Picault scored for Houston in the 13th and Chicharito equalized in the 61st. The Galaxy put four shots on goal to Houston’s two.