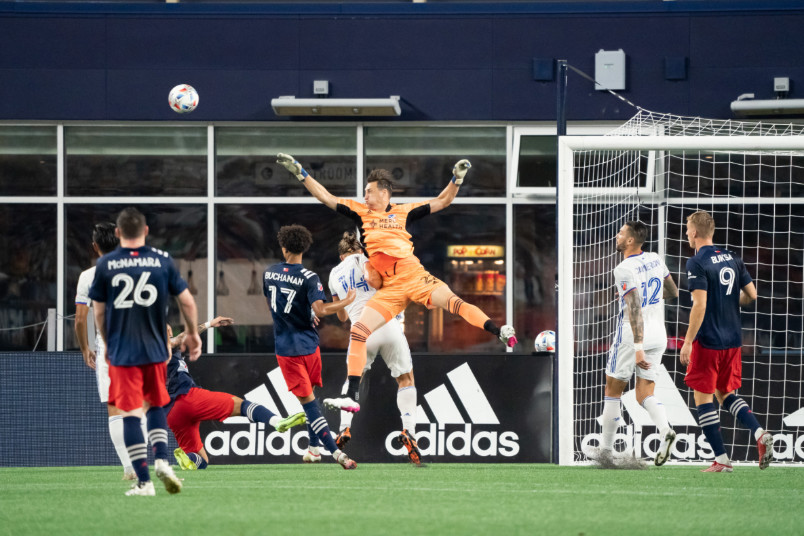 By Luis Bueno – RIVERSIDE, CA (Sep 1, 2021) US Soccer Players – We are finally entering the home stretch. There are roughly two months left in the season, and the playoff picture is tightening up. With only a handful of games remaining, teams are running out of wiggle room to compensate for poor results earlier in the season.

Of course, that doesn’t matter as much to the top team in the standings this month. New England is running away with the Eastern Conference, 14 points up, and the Supporters’ Shield, seven ahead of Seattle. At this point, anything approaching an opening, much less a collapse, seems highly unlikely.

August finished with a 2-0 loss, ending a four-game winning streak. Losing to a contender like NYCFC would normally raise issues, but the Revs were noticeably shorthanded. Carles Gil should return this month from injury. Considering that New England went 4-1-1 without Gil, the club is sitting in a great position to do even more damage in September.

It’s not that the Sounders are suddenly poor, but the team is finally facing adversity. On the field, Seattle dropped its fourth game of the season, losing 2-0 to Portland on Sunday. Off it assistant coaches Gonzalo Pineda and Djimi Traore left the club to join Atlanta United’s coaching staff. The Sounders have time to adjust.

Taty Castellanos is showing his worth as a striker by getting hot at the right moment. Castellanos scored six of his ten goals since July 25, four of them in August. His latest two came Sunday in a decisive 2-0 win over Eastern front-runners New England. With Castellanos set to surpass his career high of 11 goals set in 2019, NYCFC has a legitimate scoring threat that can carry the team through tough moments.

Nashville SC is setting itself up as the perfect postseason sleeper. Tied on points for 2nd-place in the Eastern Conference, they’re not getting the same attention as Orlando City and NYCFC. Nevertheless, Nashville continues to grind away. The club dropped just one match last month and collected nine points over a tough schedule.

Sporting KC had a bit of an odd month. The club started August out with a 4-1 rout of LAFC, went undefeated over six games, but compiled just 10 points. Sporting KC had four draws to go with its two wins. By contrast, Seattle had as many points in one fewer game while dropping a match. That stopped Sporting from taking any points off of the top of the Western Conference.

Colorado is quietly piecing together one of the finer seasons out West. They had an impressive August, winning three games and playing Sporting KC to a pair of draws. The Rapids passed the Galaxy in the standings to take over 3rd-place. The schedule could help them stay there, starting September against weak teams.

Orlando’s season was starting to feel like it was slipping out of control in July, with three losses that month including a 5-0 shellacking at the hands of NYCFC. Things changed in August, finishing the month unbeaten in five games. Four of those were draws, with Orlando scoring just four goals all month. The games were certainly not attractive, but they showed that Orlando can stay in the pciture.

The Union had their Champions League semifinal series to think about while keeping focus on the league. They picked up eight points last month, now facing a September where the CCL looms on September 15. Club America leads 2-0, and once again Philadelphia is balancing competitions.

The Galaxy had a slow finish to August, losing to San Jose and Colorado before an exiting 3-3 draw at LAFC got them a point. That meant slipping from 3rd to 4th. The Galaxy plays 3rd-place Colorado and 5th-place Minnesota this month. They could use those games to either get back toward the top of the conference or fall even further off the mark. Given the Galaxy’s spotty play, either result is possible.

Minnesota finished off August the way it started, with a win over Houston. With just one goal in their prior three games, United put together a 2-0 shutout of the Dynamo. Struggling striker Adrien Honou did the scoring, another potential bright spot.

DC United is turning out to be the surprise of the Eastern Conference. They enter September in the 7th spot in the table, three points ahead of 8th-place Columbus. While the spot is far from secure, DC is coming off a 3-1 win over Philadelphia, a possible turning point result. DC players said they felt that win featured some of the best soccer the team has played all year. Now is the time, with momentum counting for a lot over the final weeks of the regular season.

CF Montreal picked up win number eight on the season, matching their total from last year. In reality, though, the expectations for Montreal are always too low. Prior to 2020, the club had double-digit wins every season since joining MLS. Home field advantage and other teams with issues could see Montreal make a move this month.

San Jose is the king of California, beating both LAFC and the Galaxy last month while those two teams tied one another. It’s part of a bigger turnaround for the Earthquakes. Perhaps the most inconsistent club in the league, San Jose lost five of six in May and June but have a 3-0-7 record over the last two months.

Speaking of inconsistency, Portland can look like a title contender one day and an expansion club the next. They showed both of those extremes in a 6-2 home loss to Seattle earlier in the month before shutting them out 2-0 away. Overall, the Timbers have had more ups than downs with 27 points.

The Crew lost its first five games of the month before beating rivals FC Cincinnati in an intense back-and-forth match. The win snapped a six-game losing streak, but Columbus enters September on the outside of the playoffs looking in. They play Miami and New York Red Bulls in two of its first three games in September, both of those teams below them in the table.

Brian Rodriguez finally showed his worth, scoring twice against the LA Galaxy last time out. His first goal was spectacular, carving up the Galaxy’s defense. Somehow, LAFC settled for a 3-3 draw. The attack was back to its former self, at least for one day. Unfortunately for LAFC, even if Rodriguez and fellow newcomer Cristian Arango continue to play well, the defensive issues will hold this team back.

Atlanta made a bold move, opting to give Seattle Sounders assistant Gonzalo Pineda his first opportunity as head coach. Atlanta had won four consecutive games before dropping a 2-0 home match to Nashville. Regardless, things are moving in the right direction.

Freddy Juarez’s tenure at RSL ended rather abruptly. Juarez resigned his post on Friday to join the Sounders’ coaching staff. It seems a bit telling that he saw more of a future as an assistant coach than a head coach, especially to make that move midseason. In the first game without Juarez, RSL promptly lost 4-1 to Vancouver, who sacked their coach the day before. RSL is in 7th-place, but it certainly doesn’t feel like that.

It was the timing of the dos Santos parting of the ways that was the surprise. Vancouver had some tough conditions to play under at the start of the season but hung around the playoff picture regardless. Now settled in back home at BC Place, they could very well make a charge to the postseason. Vancouver’s first match without dos Santos in charge was a 4-1 rout of RSL, so perhaps the move will ultimately pay off.

Chicago’s 10th-place spot in the Eastern table is a bit deceiving. While it might be their ceiling, the Fire beat both of the teams in front of them over the last two months. Unfortunately, all six of the Fire’s rivals enter the month occupying a playoff spot. The occasional win is one thing. As Chicago can attest, getting enough points to climb the table is another.

When the Red Bulls surprised Orlando City on July 3, it seemed like a possible turning point. It turned out to be the case, but in the wrong direction. Since that win, New York is 1-5-3. New York starts the month 22 points out of the playoff picture. There are plenty of reasons, but what’s left is a club in need of serious work.

Inter Miami is not the worst team in MLS anymore, emerging from the cellar. A 3-1-2 record in August included a win over Nashville SC. It’s too late in the season to make a realistic playoff push, but what happens now can build confidence in a squad. They’ll need it now and next season when penalties limit their ability to spend.

Austin’s offense has improved, but the defense has been less than stellar. 13 goals allowed chased their two wins in August. A different team when they’re playing at home, something they’ll do three times this month. Buzz is important for an expansion team, and Austin is creating it at Q2 Stadium.

FC Dallas enjoys having Austin FC around, at least it did in August. Their only wins last month came against their regional rivals, keeping them near the playoff positions. Turning that into a playoff spot is the issue, with Dallas needing to address several problems. Consistency is the key, and FC Dallas has just one game left against Austin FC.

Sitting two points out of last place, Cincinnati is running out of time to come up with answers. August looked solid enough with three draws, but the month ended with a 4-1 loss at New England and a 3-2 loss at Columbus. Losing to the Revs is the expectation, but getting anything against the Crew would’ve meant salvaging some dignity this season. Concinnati has now gone two months without a win, and their last one came against Toronto.

Houston has become the team that others get right against. They lost five of six games in August and all of those clubs used those points to feel better about themselves. On the strength of those results, Colorado surged to 3rd-place, Minnesota (twice) solidified its spot in the table, RSL stayed in 7th, and Austin climbed out of last place. Houston and Austin start September tied for last in the Western Conference. At least Austin has the expansion excuse.

July wasn’t a terrible month for the club, but the bottom dropped out in August. Winless in seven games, they finished the month with four consecutive losses. While not downplaying having to relocate to Orlando for the first half of the season, this doesn’t look like the team that consistently competed for MLS Cup over the last four seasons.