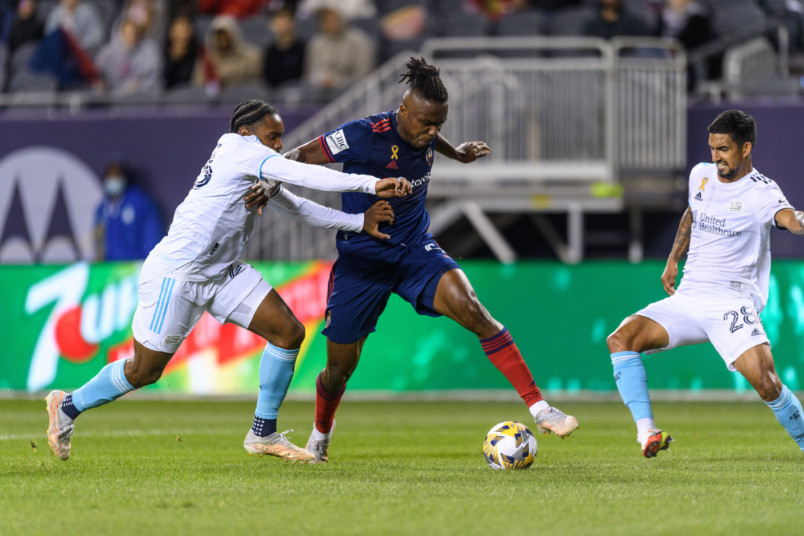 Thursday’s soccer news starts with the MLS roundup. New England beat Chicago 3-2 at Soldier Field, clinching a playoff spot. Henry Kessler put the Revs up in the 11th and Chicago equalized through Carlos Teran in the 40th. Teal Bunbury made it 2-1 New England in the 62nd minute, but Chicago responded almost immediately when Gaston Gimenez scored in the 63rd. Carles Gil scored New England’s winner a minute into stoppage time.

“Our goal is always to make it into the playoffs, so it happening this soon is great,” Bunbury said. “We’re excited and we’re happy, but we’re still thinking about things we could’ve done better in tonight’s game in Chicago. Taking the lead and then giving it away a couple times and not being clean enough, I think, on the ball, not winning enough tackles. So, there’s a lot of things we can work on but it’s positive. I mean, making the playoffs is always the goal but we have bigger aspirations.”

Nashville beat Inter Miami 5-1 in Fort Lauderdale. Hany Mukhtar scored for Nashville in the 6th and Walker Zimmerman doubled the lead in the 39th. Mukhtar scored again in the 48th minute. Inter pulled a goal back through Gonzalo Higuain in the 64th, but Randall Leal made it 4-1 Nashville in the 70th. Nashville played a man up from an 86th minute red card to Gregore. Alistair Johnson finished off the Nashville goals six minutes into stoppage time.

The Red Bulls and NYCFC drew 1-1 at Red Bull Arena. NYCFC’s Valentin Castellanos scored in the 31st, but a red card to Keaton Parks in the 73rd had them playing a man down. A red card to Maxime Chanot ten minutes into stoppage time had NYCFC playing two men down. Patryk Klimala converted the penalty two minutes later to split the points.

Leon came back to beat Seattle and claim the 2021 Leagues Cup title in Las Vegas. Cristian Roldan put Seattle up in the 48th. Leon’s Angel Mena responded with a 61st minute goal and an 81st minute penalty. Emanuel Gigliotti made it 3-1 Leon in the 85th. Nicolas Benezet pulled a goal back for Seattle two minutes into stoppage time.

In Europe, Jordan Pefok scored for Young Boys in their 6-1 win at Lausanne Sports in the Swiss Pro League. Ulisses Garcia put Young Boys up in the 27th and Meschack Elia doubled the lead in the 31st. Christian Fassnacht added a goal in the 46th and Pefok made it 4-0 in the 62nd. Fassnacht scored again in the 85th and Wilfried Kanga finished off the Young Boy goals in the 88th after subbing on for Pefok in the 63rd minute. Laussane scored in the 90th minute.

Yunus Musah subbed on at halftime for Valencia’s 3-1 loss at Sevilla in La Liga. Already down 3-0 from goals in the 3rd, 15th, and 22nd, Valencia’s Hugo Duro scored in the 31st minute. DeAndre Yedlin’s Galatasaray lost 3-0 at Kayserispor to goals in the 39th, 54rd (pen), and 45th minutes.

Weston McKennie’s Juventus beat Spezia 3-2 away in Serie A. Moise Kean scored for Juve in the 28th. Spezia equalized in the 33rd and went ahead in the 49th minute. Juventus responded with goals from Federico Chiesa (66th) and Matthijs de Ligt (72nd). Gianluca Busio started and Tanner Tessman subbed on in the 81st minute for Venezia in their 2-0 loss at Milan.

In Ligue 1, Timothy Weah subbed out in the 60th minute of Lille’s 2-1 home win over Stade de Reims. Jonathan David scored for Lille in the 31st and Benjamin Andre doubled the lead in the 43rd. Reims converted a 74th minute penalty. Nicholas Gioacchini subbed on in the 82nd minute of Montpellier’s 3-3 home draw with Bordeaux. Valere Germain scored for Montpellier in the 11th minute. Bordeaux equalized in the 19th and went ahead in the 29th. Germain leveled the score in the 50th and Florent Mollet gave Montpellier the lead in the 71st. Bordeaux equalized in the 85th minute.

UEFA released a statement questioning how FIFA is managing the discussion of a biennial World Cup. The Guardian’s Paul MacInnes looks at UEFA’s issues with the World Cup potentially moving to oevery other summer. iNews’ Daniel Storey explains the role of the support player for English clubs. The Athletic’s Sam Stjeskal and Felipe Cardenas with what we know about the Leagues Cup revamp.

“What he’s doing is more of an inspiration than anything that any of us could ever do.”

Photo by the Chicago Fire