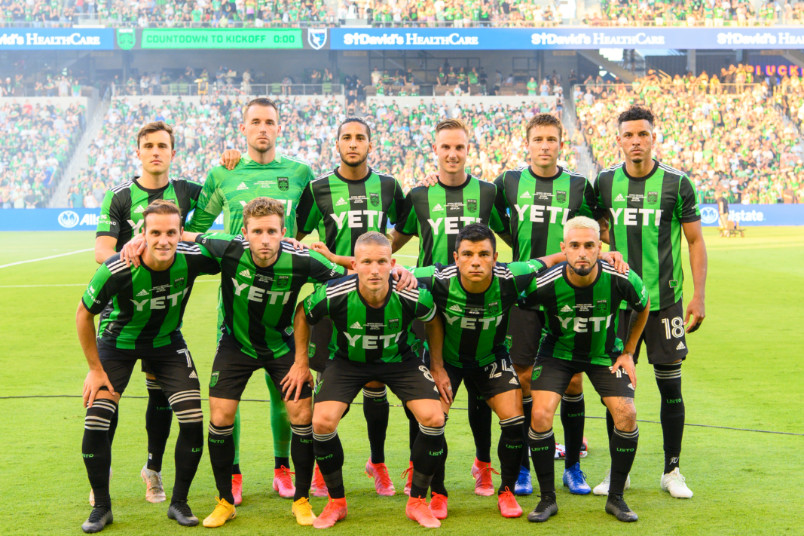 It sounded much more lighthearted in context than it might look on paper. A genial one-liner tossed out with a smile in the midst of a conversation with a well-intentioned journalist. Still, the strain of a difficult season was detectable in Josh Wolff’s voice during his weekly Austin FC press conference on Wednesday.

That’s perfectly understandable. Wolff’s team, Austin FC, is riding a five-game losing skid winning just two matches since mid-July. They rank second from bottom in MLS in goals scored, shut out 13 times. After laboring to find the net for long stretches earlier in the year, they’ve lately grown leaky at the back, conceding 16 goals in those five most recent losses. That includes particularly painful defeats at the hands of their cross-state counterparts and fellow 2021 stragglers Dallas and Houston.

“Those were emotional hits, certainly to us as players, our fanbase as well, and to our staff,” acknowledged Wolff. “But we’ve got to get better because of it and learn from those experiences.”

It all adds up to a 5W-16L-4D record, good for last-place in the Western Conference standings and second from bottom in the overall league table. The expansion euphoria has just about worn off for Major League Soccer’s newest club.

“We’ve hit, certainly, a path and a pattern here that’s been difficult to overcome, difficult to come out of,” Wolff said in the same presser. “There has been a lot of good. We’ve certainly had some adversity along the way, with being on the road, certainly some injuries – key injuries. And again, those are part and parcel, those are adversities that you’re going to face as a team. And I think a little more so because we are a new team. We don’t have the depth there built out yet. But that’s what we recognize we’ve got to continue to build and layer in, because I think our identity, the way that we play and certainly the emotion that our guys consistently show, barring a few poor performances, has been pretty good.”

MLS took a unique path to Texas’s capital city, for many years well off the beaten path for potential expansion. It suddenly rocketed into the conversation in late 2017 when Columbus Crew investor/operator Anthony Precourt delivered a controversial threat to relocate that club to central Texas. MLS eventually came up with a solution that kept the Crew in Columbus while expanding to Austin.

Austin greeted its new team with open arms. Legions of fans flocking to the thoughtfully designed Q2 Stadium despite the fact that it sits in a compromise location well northwest of the city’s downtown. A lengthy season-ticket waiting list provided one measure of proof, while a strikingly vibrant game day atmosphere and visits from the US national teams offered further tangible evidence.

The first run of jerseys sold out immediately. Minority owner Matthew McConnaughey spiced things up with his characteristically quirky approach to promotion and support. Wolff’s commitment to a Barcelona-flavored system of possession and positional play in his first head coaching job made clear that soccer aesthetics would matter.

As smashingly as the off-field vision unfolded, on the field, the team itself has encountered one reality check after another. MLS expansion life has generally coalesced into two pathways over the years, the Seattle-Atlanta-LAFC path and everyone else’s. There are only so many substitutes for experience, and that trio of teams that bucked the norm of first-year struggles did so via pronounced displays of ambition, first and foremost in spending power. Names like Tata Martino, Josef Martinez, Miguel Almiron, and Carlos Vela amounted to cheat codes in MLS, requiring large amounts of financial muscle in turn.

The roster-building process overseen by Wolff and his former USMNT colleague Claudio Reyna featured some smart pickups domestically and abroad. As they searched for the front-line spearheads that would complete their XI, Austin didn’t see exactly what they wanted in last winter’s international window. So they elected to sit tight and see what would materialize in the broader parameters of the summer market.

Eventually, the club recruited centerpiece attackers Moussa Djitte and Sebastian Driussi. Yet both had to endure COVID-19-impacted delays, catching up to their new team in mid-stream. It’s only added to the sensation of a promising squad that isn’t quite ready for its closeup yet, even with more familiar MLS faces like Diego Fagundez and Alex Ring stepping up to this new test. In that sense, Wolff and his group are enduring a steep learning curve. In retrospect, that should probably surprise no one.

The city’s warm welcome has also included substantial media coverage. The league’s newest team, which is also Austin’s only topflight pro franchise, has one of its largest press packs. That scrutiny, combined with the passionate fan support, has only made the current predicament more uncomfortable for Wolff et al. He found himself offering to share more of his staff’s process with fans and reporters this week.

“I’d be more than happy to sit down with media,” said Wolff on Wednesday. “Some sort of chalk talk, anything throughout the week to help engagement with fans with meeting, even if it’s fan-led. I’m sure there’s disappointment, anger and all those things, and I understand that.”

Even with MLS’s generous postseason format offering playoff places to seven teams from each conference, the steady accumulation of frustrating losses has left “the Verde” staring at some sobering realities heading into the home stretch of their inaugural campaign.

“We’ve got nine games left, and that’s kind of what I’ve presented to these guys. Let’s make this nine-game season as much as we can,” said Wolff, “and create some goals in there and really focus on those things individually and collectively that could give us the best chance to win games, and build momentum as the season goes on.”

This week goalkeeper Brad Stuver, a longtime MLS backup who has seized this opportunity with both hands to produce a career year, echoed that mindset in an open letter to Austin’s supporters.

“Our goal now is to push in this last stretch of games and prove to everyone what we are capable of,” he wrote. “Together, we will accomplish anything we set our minds to. Together, we can make the next nine games a true reflection of not just who we are as individuals, but more importantly, who we are as a club.”

So maybe it will take a bit longer to learn about what kind of club Austin will be. 2022 already looms large in central Texas.