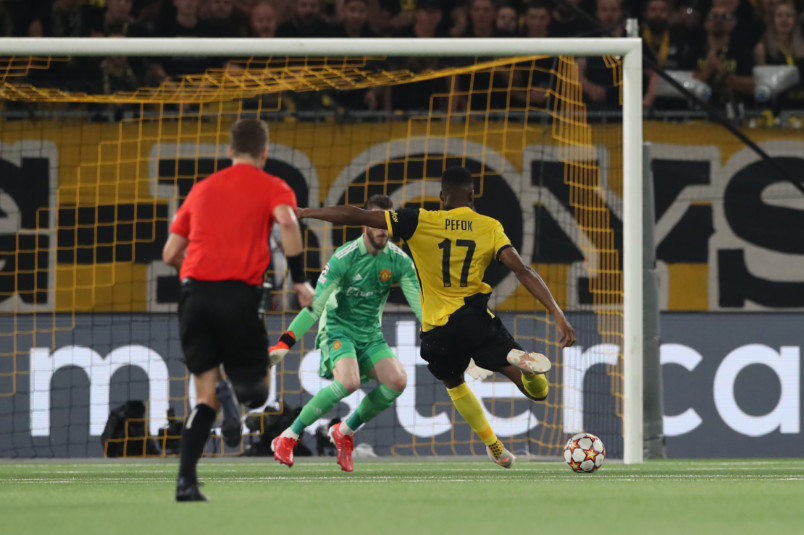 Wednesday’s soccer news starts with Jordan Pefok getting the late winner on the opening night of the 2021-22 UEFA Champions League group stage. Young Boys beat Manchester United 2-1 at home, playing a man up from the 35th minute. Trailing from the 13th, Nicolas Ngamaleu equalized for Young Boys in the 66th. A halftime substitute, Pefok took advantage of a deflected backpass to score five minutes into stoppage time.

“I think we stayed strong,” Young Boys coach David Wagner said. “We’ve seen games against ten men that were generally a bit less attractive than this one. But we did say we wanted to play our football with our identity, our aggression, and our passion. And even if we had the extra man, the boys did that brilliantly. And they did it when it was still 11 against 11, to be honest with you. They deserve huge credit.:

Brenden Aaronson’s Red Bull Salzburg drew 1-1 at Sevilla. Luka Susic converted a 21st minute penalty to give Red Bull the lead. Sevilla equalized from the penalty spot in the 42nd, going a man down in the 50th minute. John Brooks saw red in the 63rd minute of Wolfsburg’s 0-0 draw at Lille. Timothy Weah wasn’t in the squad for Lille.

Weston McKennie subbed on in the 68th minute of Juventus’s 3-0 win at Malmo. Alex Sandro opened the scoring in the 23rd. Paul Dybala added a goal in the 45th and Alvaro Morata made it 3-0 a minute into first-half stoppage time. Romain Gall wasn’t in the squad for Malmo.

“The Champions League opener is never straightforward,” Juventus coach Massimiliano Allegri said. “We were also coming into it after a not-so-easy period. There’s room for improvement in terms of possession, but there were still positives in that area.”

Sergino Dest was on the bench for Barcelona’s 3-0 home loss to Bayern Munich. Christian Pulisic is injured, missing Chelsea’s 1-0 home win over Zenit St Petersburg. Romelu Lukaku scored the game’s only goal in the 69th minute.

In the Championship, Duane Holmes was on the bench for Huddersfield Town’s 3-0 win at Blackpool. Josh Koroma (48th), Matty Pearson (54th), and Jonathan Hogg (62nd) scored the goals. Matthew Olosunde wasn’t in the squad for PNE’s 2-2 draw at Sheffield United. Down a goal from the 7th, Daniel Johnson equalized for Preston in the 19th minute. Trailing again from the 84th, Emil Riis Jakobsen scored five minutes into stoppage time.

Moving to MLS, Columbus came back to beat the Red Bulls 2-1 at home. Patryk Klimala scored for New York in the 25th. Columbus equalized through Darlington Nagbe in the 74th and Miguel Berry scored in the 88th minute.

NYCFC and FC Dallas drew 3-3 at Red Bull Arena. Jader Obrian put Dallas up in the 4th. Maxi Moralez equalized for NYCFC in the 20th and Jesus Medina made it 2-1 in the 57th. Dallas equalized from a Jesus Ferreira goal in the 63rd. NYCFC’s Talles Magno had them back in front four minutes later. Obrian scored his second goal of the game to bring Dallas level in the 73rd. NYCFC finished a man down with a red card to Thiago two minutes into stoppage time.

Inter Miami won 1-0 at Toronto on a Christian Makoun penalty five minutes into stoppage time. Toronto played a man down from the 37th with a red card to Kemar Lawrence.

Seattle will represent MLS in the 2021 Leagues Cup final after beating Santos Laguna 1-0 at home. It was Raul Ruidiaz with the late-game heroics, scoring three minutes into stoppage time.