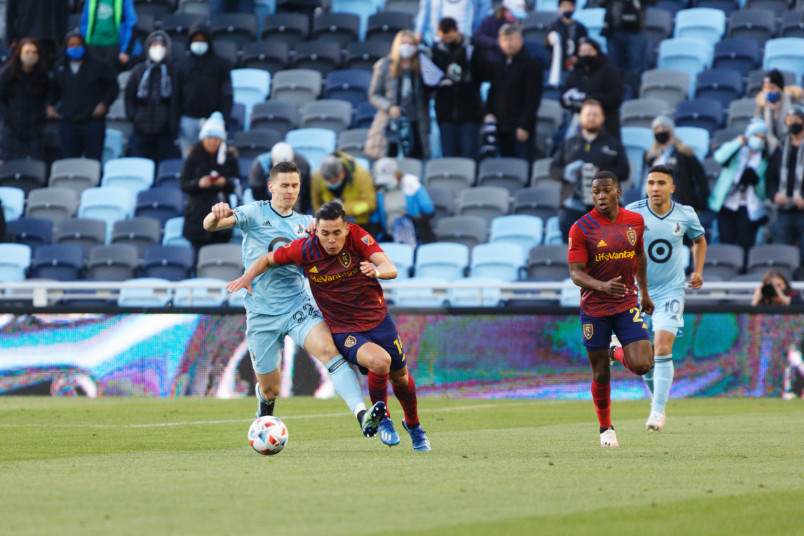 By Luis Bueno – RIVERSIDE, CA (Sep 8, 2021) US Soccer Players – Typically, the on-the-field play suffers when things are chaotic for Major League Soccer teams off the field. Distractions are real. Teams tend to find it difficult to concentrate on the task at hand while keeping an eye on off-the-field issues. Eventually, it becomes too much. All that, though, simply makes Real Salt Lake’s 2021 campaign a bit more astounding.

Few could have faulted Real Salt Lake for playing through an anonymous 2021 season. Last August, the squad’s choice to not play a league game as part of the broader protest of the police shooting of Jacob Blake in Wisconsin was not supported by the club’s investor/operator Dell Loy Hansen. Further allegations from front office employees led to an MLS investigation, and ultimately Hansen committing to sell the team. That hasn’t happened yet, with MLS taking over the process in January.

Finding an ownership group has been tricky despite the amount of interest there has been in buying into MLS. Among those linked with a potential purchase of the club is Qualtrics CEO Ryan Smith, who bought the Utah Jazz in 2020, and the Miller family, who sold the Jazz to Smith and has been a fixture in Salt Lake City for years. Such a sale to a local ownership group would only strengthen the club’s roots in Salt Lake City.

Right now, it’s a team trying to move forward without a clear idea of what the next investor/operator wants. It’s easy enough to assume that’s winning, but even that isn’t straightforward.

Salt Lake is under an interim coach after Freddy Juarez left the club by choice late last month to take an assistant’s job at Seattle. “Today we immediately begin an exhaustive search for the right person to lead our Club to our desired and expected levels of success,” Real Salt Lake GM Elliot Fall said in announcing Jaurez’s departure. “With our combination of talent, infrastructure, commitment to development, and the local relevance thanks to our incredible fan base, we are uniquely positioned to usher in a new era of growth and success for Real Salt Lake and the Utah sports community.”

The team is already right there in the thick of things. With one week of September gone, RSL has an 8-8-6 record, good for 30 points and 7th in the Western Conference table. RSL is ahead of LAFC, even with Portland, and just one point back of Minnesota United, all teams with more stable off-the-field situations and slotting in as preseason contenders.

RSL, meanwhile, looked like a team facing an uphill climb in 2021. The off-the-field uncertainty combined with a limited budget for reworking the squad. Player recruitment centered on the likes of Bobby Wood and Rubio Rubin, MLS newcomers who could have gone either way. Rubin now has a new contract after scoring five goals. Longtime stalwarts Damir Kreilach and Albert Rusnak lead the way with eight and six goals apiece, respectively, as well as five assists each.

For now the focus on the team will be centered on what happens on the field. RSL’s most recent match was a thrilling 3-2 in over FC Dallas that has sort of typified the team’s season. RSL allowed an early goal but hit back with three unanswered to take a 3-1 lead and then held on for a win. RSL’s attack overwhelmed FC Dallas in the middle portion of the game as three different players scored goals.

It’s the attack that has carried the team this season, but the club’s will has kept it competitive. That spirit remains under interim coach Pablo Mastroeni, though it took a game to get there.

The day after Juarez left the club, RSL lost to Vancouver 4-1 at BC Place. A week later, the win over FC Dallas seemed to restore faith in the system. Mastroeni won an MLS Cup as a player and took the Rapids to the 2017 Western Conference final.

What Real Salt Lake needs now is consistency over the stretch run. They had a strange August even before Juarez’s departure, losing at the Galaxy and Portland, beating Austin and Houston at home, and then losing at Colorado. The Vancouver loss made that two wins and four losses. Their upcoming schedule takes them to LAFC, San Jose, and then home to the Sounders. It’s back on the road at Portland and then finishing the month at home to the Galaxy.

RSL’s up and down form makes it tough to predict any of those encounters, with the schedule noticeably easier in October. With that in mind, September could be about doing just enough to make October competitive. At Austin, Chicago, and Dallas and home to San Jose make four out of their five October dates winnable. A few surprises and RSL could improve on their playoff position.

Regardless, these players have survived some rough waters over the last year-plus and being in playoff contention so late in the season speaks well of their determination. If the team can continue to find results, the playoffs will be a proof of concept regardless of what comes next.