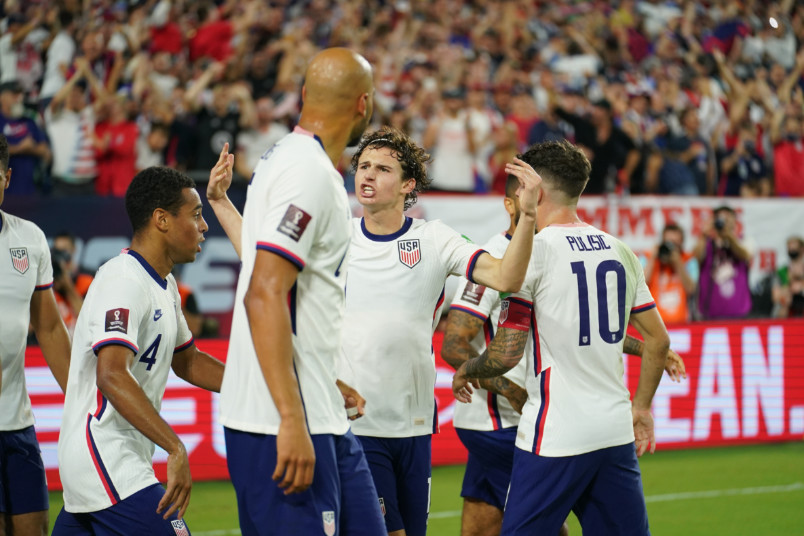 By J Hutcherson (Sep 7, 2021) US Soccer Players – The USMNT is in a different situation than at any point during the summer tournaments. They face what seems like a game that requires a result, but that won’t be clear until much later in the World Cup qualifying cycle. Right now, the pressure is on for not beating El Salvador and Canada, but the undefeated streak remains intact. It’s an interesting situation for any team going on the road in Concacaf, especially now.

Doing away with the group stage entirely for the highest-ranked teams, Concacaf opted for expanding the Hexagonal to the Octagonal. That meant adding triple-matchdays to some of the windows to get the games in. It’s hard to fault any pandemic-related maneuvering, but it’s also tough to discount what this crash of games really means in practice.

Drawing comparisons to previous World Cup qualifying cycles means ignoring the experience teams might gain in the group stage. It also means focusing on a shorter final round. The last Hexagonal started in the November 2016 window and ran through the following October. The Octagonal schedule started last week and will finish in March. Since it’s the last qualifying cycle before World Cup expansion, it’s going to be a one-off for everybody involved.

That’s where comparisons and potential lessons from earlier cycles already start to break down. Triple matchdays as a result of the pandemic shouldn’t suggest that they’ll become yet another new normal. Neither does trying to cram qualifying into a short window. Whatever any team might learn between now and March, this cycle is always going to be unique.

With that in mind, we’ve probably heard enough about squad rotation and game management to last us through the rest of this qualifying cycle. It applies to every team in the region playing through the Octagonal. Fatigue, club issues, injuries, coaching discretion, travel. You name it, and it could potentially make the difference for a team going through or staying at home.

For the United States right now, at Honduras can represent a variety of things. “Not good enough,” has carried the discussion following the 0-0 draw at El Salvador and another point after finishing 1-1 at home to Canada. It’s tough to even start on something that can take in so much. The USMNT is playing without a true back to goal, turn with the ball striker. That requires playing into the dangerous areas. Without that service to the forwards, it’s tough to expect lots of shots taken and getting enough of them on goal.

Back that out to midfield, and there’s certainly skill from the USMNT. Still, it’s fair to ask why we aren’t seeing more dangerous balls from incisive passing. That’s necessary to unlock an attack that seems stuck trying to play itself into better opportunities. Again, that’s not exactly news to anybody watching these games with growing frustration. Blame tactics (coach) or assignments (players, but it comes down to the same thing. The first question to Christian Pulisic in the postgame press conference addressed that.

“I think we need new ideas at times,” Pulisic responded. “I think… yeah… today, I think we were just… we didn’t test them enough. Whether it was not being direct enough or not.. yeah, I’m not so sure. But it just felt like we couldn’t break them down. Obviously, they defended well, but we just need some new solutions…. Obviously, wasn’t good enough.”

There’s no reason to downplay Pulisic hitting the post in the 40th minute. A goal on the way to three points makes what happened in Nashville good enough. The US carrying a lead into the half forces Canada to reconsider giving up so much possession even if it’s on the road against a stronger team. The game changes accordingly, and that’s part of the issue the USMNT faces in every qualifier.

Being able to force teams to play a specific strategy in hopes of not losing has to become a competitive advantage. Finding the seams in opposition strategies and making them pay for tactical choices. That’s what differentiates the best teams in any region. Canada has given up the ball in two consecutive qualifiers against distinctly different teams while not getting bombarded by shots on goal. That’s a tactical choice that will work as long as it works.

Meanwhile, Honduras took a point at Canada and drew 0-0 at El Salvador in two noticeably different scenarios. Canada gave up possession to them in Toronto. They gave up possession to El Salvador at Estadio Cuscatlan. Six shots on goal against Canada turned into one against El Salvador. With the United States not likely to sit back and wait for Honduras to move the ball, what we see on Wednesday night could be different.

One window could mean just enough time for teams to show how good their ideas might become. It’s another odd transition from a summer of tournament soccer with a quick reward to this revamped version of the qualifying grind.

It’s too early to suggest that game management will be the biggest difference for who advances to the 2022 World Cup out of Concacaf. There’s plenty of games left for talent to emerge, flukes to happen, and interesting decisions to disrupt plans all over the region. That’s the give and take of Concacaf World Cup qualifying, the one thing all of the teams involved can rely on with one game left in the September window.