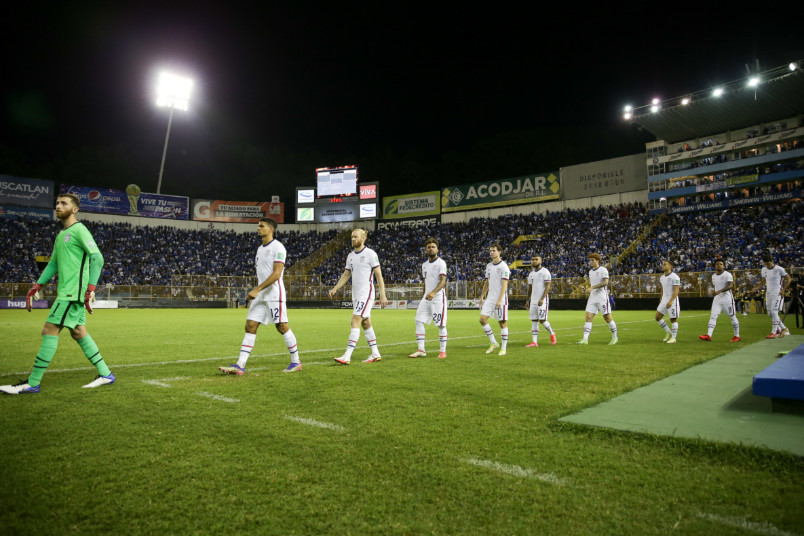 Friday’s soccer news starts with the first quick turnaround for the USMNT in Concacaf World Cup qualifying. After a 0-0 draw at El Salvador, the United States plays Canada in Nashville on Sunday (8pm ET – FS1). As with any home qualifier, the expectation will always be three points. After the draw at Estadio Cuscatlan, expectation management is once again somewhere near the top of the list of issues for USMNT coach Gregg Berhalter.

The United States put two shots on goal to El Salvador’s one, with El Salvador leading on corners five to three and on total passes and passing accuracy. That left Berhalter opting for a pragmatic approach in his post-game comments.

“Look around Concacaf,” he said. “All ties and Mexico won in the 90th minute at home. They’re dogfights. We take the point and move on.”

It’s an open question how many USMNT fans really need a deeper understanding of how Concacaf World Cup qualifying works, but it’s hard to blame the coach for stressing the degree of difficulty right now. The churn of games is new, with similar pressures in front of partisan crowds doing their best to create a clear and loud home field advantage.

That shifts to Nissan Stadium on Sunday night with Canada also carrying issues into their second qualifier. For the USMNT, it’s what happens in the final third. Following their 1-1 home draw with Honduras, for Canada it’s similar. They led decisively in the categories that should mean shots on goal. 66% of possession. Over 200 more passes. 14 to 3 on corners. Yet both teams finished with 15 shots and it was Honduras putting six on goal to Canada’s three. Neither team scored from the run of play, trading penalties to split the points.

“It’s going to be a marathon,” Canada coach John Herdman said following the draw. “The first game at home, it was a three-point focus, but these boys were in a number of occasions inches away from sending the crowd home very happy. We’ve had a drop of two points tonight, and we’ve got to make them up now. It’s the start of the journey and we’ve got the ability to get better.”

For the United States and Canada, it’s also going to be a different scope in matchday two. Taking much from when the two met in the final group stage game at the Gold Cup is difficult. The USMNT took the lead in the opening minute, allowing them to play a different game while Canada pushed for an equalizer. The US finished with six shots on goal in that game, scoring on the first one and not putting another on goal. Playing from behind for so long, Canada had 55% of the possession and out-passed the US.

What that should show is how pragmatic the United States can choose to be, a team comfortable riding out a 1-0 win. Once again, it’s expectation management this time in a World Cup qualifying setting.

The Athletic’s Paul Tenorio has a reminder about the degree of difficulty on the road in Concacaf. ESPN’s Jeff Carlisle focuses on a young squad gaining experience. SI’s Brian Straus stresses the atmosphere at Estadio Cuscatlan. SN’s Daniel Rainbird with Canada’s opening game draw in World Cup qualifying. MLSsoccer’s Gavin Day looks at what did and didn’t work for Canada.