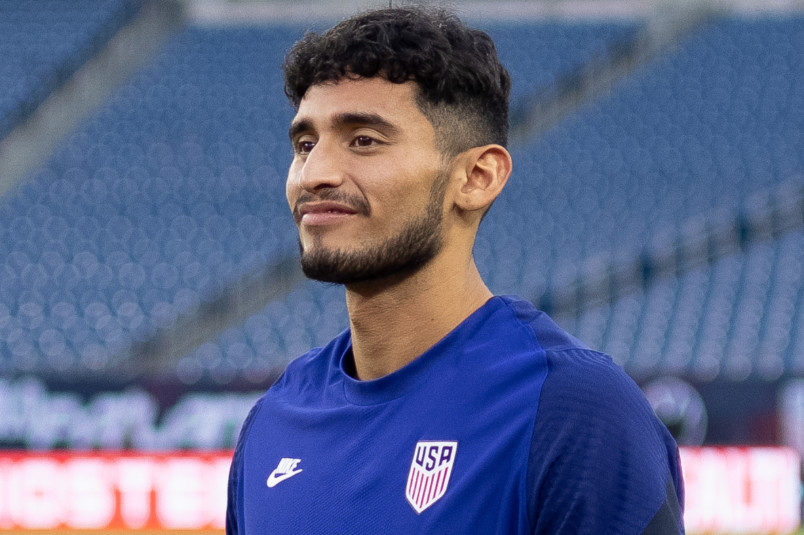 By Jason Davis – WASHINGTON, DC (Sep 10, 2021) US Soccer Players – It was just yesterday that USMNT and FC Dallas striker Ricardo Pepi was a precocious talent emerging from the Texas border town of El Paso. Okay, so “yesterday” is a bit of an exaggeration, but not by much. Pepi’s rise from local kid with potential to national team star happened so quickly that most of us just missed it. While some players spend years building up to the moment when they get their breakthrough on the big stage, Pepi rocketed into the international spotlight in the span of a few short months.

Not that Pepi arrived fully formed in FC Dallas’s starting lineup in 2020. His journey to the USMNT took him through a process carefully curated by the club. FC Dallas’s investment in and commitment to young players is well known. Pepi benefited from both. By the time he showed his ability to play with and against fully grown professional players, FC Dallas had a plan.

Like so many great young players, Pepi’s father served as his most influential coach. The elder Pepi pushed his son to reach his potential, ultimately handing off responsibility for developing the striker’s game to professional coaches when his progeny caught the attention of FC Dallas scouts.

When he was just 13, Pepi left El Paso to join the FC Dallas academy on the other side of the state. Though the distance between Pepi and his family wasn’t as vast as it could have been, it was keenly felt. The decision to leave home at such a young age is never an easy one. No kid could be blamed for choosing comfort over uncertainty. Just a note, El Paso is a 10-hour drive from Frisco. Texas is big.

Pepi took the leap, and as hard as it was, he thrived in FC Dallas’s famed academy. His family eventually relocated to Dallas to better support him.

When connecting the dots that eventually led to his arrival with the USMNT, we can’t look past the choice to stay in Texas. Even though Pepi’s club team in El Paso joined the FC Dallas outpost there and the MLS organization attempted to shield him from Mexican interest, Pepi had strong offers to join an academy south of the border.

By the time he reached 16 and his coordination caught up with his ample physical gifts, Pepi was on his path to professional soccer stardom. FC Dallas established North Texas SC as a feeder club based in the USL’s League One and signed Pepi as its first-ever player in December of 2018.

In his pro debut in North Texas SC’s inaugural game, Pepi scored a hat trick and led his team to a 3-2 win over the Chattanooga Red Wolves. More than two years on, we know that performance was anything but a flash-in-the-pan.

Pepi earned his nickname “The Train” or the now more commonly used Spanish translation, “El Tren”, on that day, when longtime FC Dallas blogger Buzz Carrick tweeted it into existence. Even for a club known for delivering talented young players from the academy to the senior team, Pepi stood out. His prodigious physical gifts combined with a natural nose for goal sparked the imagination.

Starting with North Texas afforded Pepi time to adjust to the professional game out of the MLS spotlight. Rather than elevate a still-green player to the first team where minutes might be sparse and expectations inflated, the club leveraged its lower league investment into an incubator for their budding star.

North Texas SC won the first championship in league history to finish the year. The then-16-year-old Pepi finished with nine goals in the regular season and added two more in the semifinal playoff victory over Forward Madison.

Pepi spent 2020 with the senior team, though head coach Luchi Gonzalez limited his young striker to spot starts and substitute appearances. Balancing the quest for club success with FC Dallas’s ethos of playing academy graduate, Gonzalez managed to give Pepi an introduction to MLS while protecting him from the full rigors of a difficult pandemic-impacted season.

The 17-year-old scored just two goals in just under 500 minutes. Within FC Dallas and USMNT youth national team circles, Pepi was a known star in the making. For most of American soccer, he was still just unknown.

Few in Dallas are then surprised by the massive step Pepi is taking in 2021. Despite their difficult season, Pepi is shining as the club’s lead striker after winning the job at the top of the formation.

Pepi stole the show at the 2021 MLS All-Star when he converted the winning penalty against the Liga MX All-Stars. The star turn, unpredictable as it was, preceded the news that he was choosing to accept a call-up to the USMNT for a set of three World Cup qualifiers. It’s hard to know what Pepi’s ceiling might be this early in his career, despite his goal total in MLS and what he did for the USMNT in Honduras.

For the time being, Pepi looks like a near certainty to be in Gregg Berhalter’s plans. With that role will come more attention, possibly facilitating significant offers from abroad. Recent trends and the track record of FC Dallas suggest that if a deal makes sense MLS will make it. Dallas signed Pepi to a long-term contract in July.

What we know now is what we’ve already seen. Pepi is a young player who has no problem taking the pressure that comes with being a goal scorer. While it might be unfair to burden Pepi with so much at such a young age, he doesn’t seem to mind.