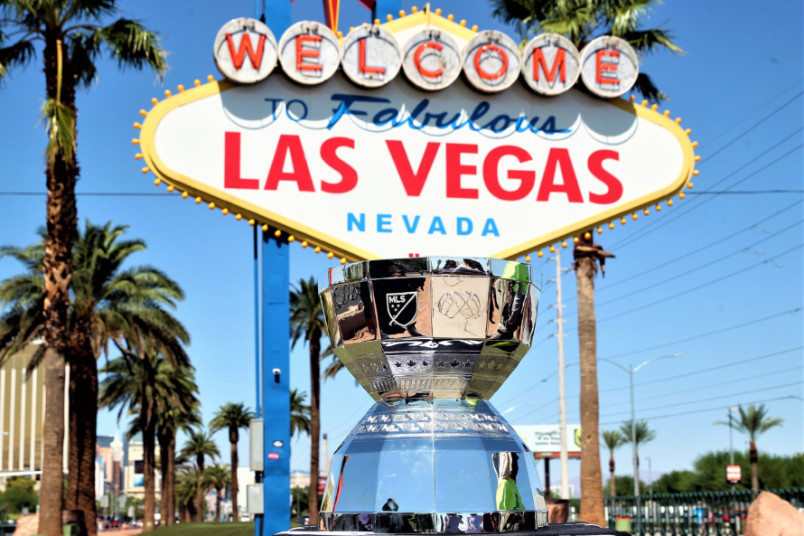 By Jason Davis – WASHINGTON, DC (Sep 24, 2021) US Soccer Players – You can’t say they didn’t try. The Seattle Sounders did their best on Wednesday night at Allegiant Stadium in Las Vegas, but their best wasn’t good enough. After going ahead when Cristian Roldan scored in the 48th minute, Seattle conceded three unanswered goals before ultimately falling to Club Leon 3-2 in the 2021 Leagues Cup Final.

The loss ends a relatively short campaign for the Sounders in the contained and constrained Leagues Cup. Although Seattle is fighting for the top playoff seed in the Western Conference, head coach Brian Schmetzer chose to play his strongest possible lineup in Las Vegas.

Schmetzer’s Sounders see winning as a habit. So with a trophy on the line, they went for it. There’s no shame in coming up short, even if it means missing out on yet another credential-builder for the league’s preeminent franchise and complicates the stretch run of the regular season with playoff positioning on the line.

There were moments when it looked like it might go the Sounders’ way. Through the first half, it was the MLS team controlling the pace of play and looked most dangerous. Leon had its chances, but the balance of play tilted in Seattle’s direction. Then Cristian Roldan provided the breakthrough just after halftime from a Jimmy Medranda service, and the Sounders took the lead.

On the one hand, that kind of performance only reinforces the growing belief that MLS is closing in on Liga MX when it comes to the quality of its soccer. Allowing for variations up and down the table, the best in MLS should always be in the game when facing Liga MX opponents, regardless of the stakes. On the other, the fact that Seattle’s advantage only lasted an hour points to the still significant differences in resources between MLS and Liga MX.

It’s worth noting that the Sounders did beat two Liga MX clubs on their way to the Vegas finale. However, with his club down a goal and in need of a spark, Club Leon coach Ariel Holan made three substitutions and changed the game. Bringing on Jose David Ramirez, Emmanuel Gigliotti, and Elias Hernandez just after 60 minutes played made the difference. Leon eventually found the goals needed to secure the League Cup trophy.

It’s not always as obvious as it was on Wednesday night just how much squad depth matters in MLS vs Liga MX matchups. The record is clear. MLS clubs are 1-9 versus Mexican teams in finals. Still, it doesn’t always switch in a moment as it did in Vegas.

Last year’s Concacaf Champions League tournament, played in a COVID-19 mandated bubble in Orlando, encouraged many to believe that MLS had closed the gap with Mexican clubs. LAFC came up short against Tigres in the final, but how Bob Bradley’s team having the championship game in its grasp seemed to promise more MLS success in the future.

The bright line between Seattle being better but not putting away enough good chances and Leon taking control will get plenty of play now that the news is out that MLS and Liga MX are expanding their Leagues Cup partnership starting in 2023. It’s probably not fair to the Sounders, but the timing makes it tough to ignore the result as yet another referendum on the competition across leagues.

Famously, MLS has come up short in every edition of the Concacaf Champions League played under variations of the current format. A Liga MX club won all twelve of those trophies. Sounders goalkeeper Stefan Frei identified the difference as one of the intangibles.

“I still sense when we face Mexican sides how aggressive and how hungry they are,” Frei said after the loss. “There’s still a bit of difference when it comes to opponents we find in our league. That’s one thing that would be really nice for us to be able to absorb into our own squad — that hunger, that drive, that arrogance at times. Then being able to back it up, too, obviously. It’s a good lesson.”

With only two iterations played thanks to the 2020 COVID-19 interruption, the Leagues Cup is yet another opportunity to measure MLS against Liga MX. Both editions ended with a Liga MX team on top. The only difference this time around was the Sounders provided an MLS foil for a Mexican favorite in the final. What went down on Wednesday in Las Vegas is what executives of both leagues hope to see come 2023 when the Leagues Cup goes supernova. The tournament doesn’t have much pedigree at the moment, but it’s now clear what the organizers want.

MLS hopes to level the playing field with Liga MX teams by playing in the summer and by pausing regular-season matches in both leagues. Combined with the plan to continue to play every Leagues Cup game in MLS venues, that might be enough to give the younger competition a chance to take the trophy.

Whether that imagined success can also provide a platform for Champions League success seems questionable. The CCL will still come at an awkward time for MLS teams, and Mexican clubs will get the benefit of home legs. If MLS truly wants to compete with their neighbors to the south, the issue of spending across rosters is still paramount.

In 2023, there will be no hiding the deficiencies in MLS rosters for clubs well below the Sounders level. For all the positives the new Leagues Cup might provide, there’s a distinct possibility for embarrassment.

The Sounders showed that even a well-run, well-prepared and talented MLS team needs more to win at Leagues Cup level. It might be possible to chalk up MLS failures against Liga MX teams to bad luck if it was for the sheer amount of data that says MLS teams don’t have what it takes to win.

Seattle narrowly missed its chance to ascend into a tier no MLS team has reached. Even in the beta version of the League Cup, that opportunity was there. There’s solace in knowing they’ll get another shot. The Sounders went for it. Right now, that counts.