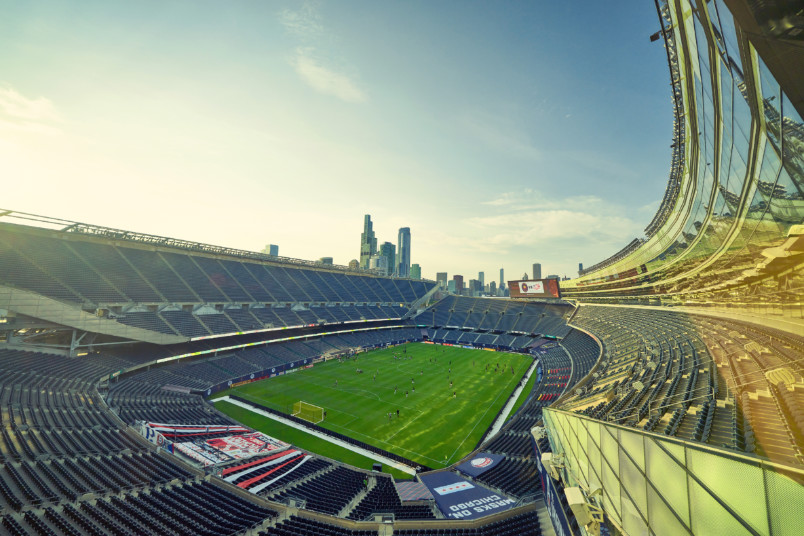 By J Hutcherson (Sep 21, 2021) US Soccer Players – In the original era of the Chicago Fire playing at Soldier Field, getting from the press box to the locker room was almost a form of time travel. Exit the modern press box, take the elevator down to the main concourse. Walk across to what looks like a random door that opens into the space underneath the bleachers. Step along the two-by-fours laid over dirt and wave to the feral cats. Another door gets to the area underneath the north stand where the locker rooms were separate concrete-block constructed buildings. Coaches gave their postgame comments inside of a catering tent.

While taking nothing away from the ambiance of an old stadium, Soldier Field as an MLS venue was living on borrowed time from the moment the Fire began playing there. Combine the need for improving the facilities for the primary NFL tenant with the growing push to get MLS teams out of oversized football stadiums in the early 2000s, and something would eventually have to happen.

Back in 1998, I was a regular in section 6 of Soldier Field, standing next to the supporters’ section in what was the debut season for the Chicago Fire. There were obvious concerns even in the early days. Some games felt like a big event. Others were closer to what regularly occurred further south at new Comiskey Park. Sparse crowds and good questions about why so few seemed to care enough about the home team to buy tickets.

Enthusiasm certainly picked up when it was clear that Bob Bradley and his players were putting together a special season. It’s worth the reminder that the Fire played for a second trophy at home due to a hurricane disrupting the US Open Cup schedule. On October 30, they beat Columbus in extra time as the away team at Soldier Field in front of an announced attendance of 18,615. That was the MLS season-ender, pointing to a team growing in its market.

Instead, 1999 saw the average dip from 17,877 to 16,016. It fell to 13,387 in 2000, a season where the Fire made it to the MLS Cup final and won a second Open Cup. By the end of that year, I was a beat writer covering the Fire for one of the big soccer sites around at the time. The league wasn’t moving from strength to strength back then, with several teams facing significant issues. With Soldier Field needing work to bring it up to contemporary NFL standards much less modernize it, the Fire would eventually need somewhere else to play.

The Fire’s attendance recovered to 16,388 in 2001. The team was now searching for a solution to that looming problem, simply finding that place to play. Soldier Field became a construction site in 2002 and the Fire relocated to North Central College in the far west suburb of Naperville. It was not a direct line to getting there. In between were plans for a modular stadium in the parking lot of a racetrack and potentially using the White Sox baseball stadium among other ideas.

For those willing to make the trip, that season in Naperville was a game of shifting capacities where the additional aluminum bleachers were rarely used. In a transitional season from Bob Bradley to Dave Sarachan, the Fire fell from back-to-back 1st-place finishes to 3rd, exiting the playoffs in the quarterfinals. Annual attendance dropped to 12,922 in a small stadium. By the end of the 2003 season, the Fire was back at Soldier Field, finishing 1st, making it to MLS Cup, and winning another Open Cup. Attendance increased to 14,005.

Staying at the new Soldier Field wasn’t the club’s future. Soccer-specificity meant moving to Bridgeview, a suburb but closer to the city. Whether or not it was close enough for the Fire to appeal broadly across Chicagoland was eventually answered by a new investor/operator opting to return to Soldier Field. Reports priced breaking the Bridgeview lease at $65m. It was not a hasty move, part of a partial rebranding to market the club differently.

There’s no hard line for a proof of concept, especially in the strange times we find ourselves living through. The Fire meant 2020 to be a restart at Soldier Field. Instead, that season ended up playing out under pandemic limitations. This season, the Fire played through a three-game home run in August that had to raise concerns. Listed attendances of 8,371 against NYCFC, 11,894 against the Red Bulls, and 13,005 against Columbus. While it’s easy enough to add to the list of very good reasons for underperforming at the gate right now, the club is taking the numbers seriously.

Speaking to the Chicago Sun-Times, investor/operator Joe Mansueto said “I think we should be having much higher attendance numbers…. We need more people in Soldier Field.”

That’s where the history of the Chicago Fire continues to inform. The early years didn’t crack the attendance concerns with one of the best teams in MLS. The Bridgeview era coincided with extended periods of not making the playoffs or exiting in the knockout round. The current revamp now ties into the broader concerns of pro sports during an extended pandemic.

While in 2021 any reference to the original North American Soccer League should carry with it an obligatory eye roll, the Chicago Sting had similar concerns with stadiums and attendance in their era. It’s a theme that seems to continue through population and popularity changes in the third-biggest market in the United States. Unfortunately for those trying to solve it now, the attempts at answers have never been easy or straightforward.