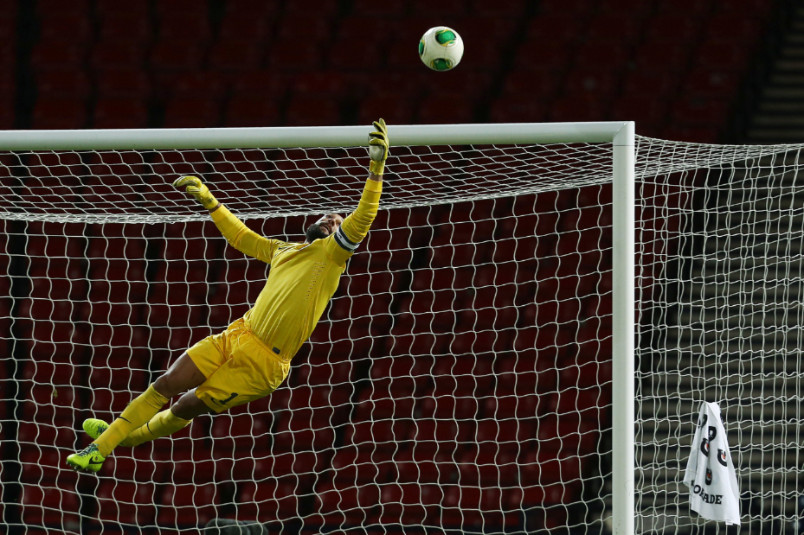 By Clemente Lisi – NEW YORK, NY (Sep 27, 2021) US Soccer Players – Soccer is a game where the attention of fans normally focuses on very few things. Goals are an obvious one. So are saves and fouls. It’s not a coincidence that both relate to the scoring of goals. What about the goal itself? They only matter to most of us when a ball hits one. They only become important when they make a difference.

High on that list is a famous incident in 1976 that helped start a surprisingly lengthy move away from the old square wooden post and crossbar style. Back then, Glasgow’s Hampden Park staged a game that called the difference between old and modern goals into question. It would take well into the next decade before FIFA officially did something about it, but the issue was obvious. At least to fans of the losing club.

Stadiums around the world had already begun to switch out those square posts for the metal tube-shaped ones that hold up the nets we are all accustomed to today. Not Hampden Park, which kept those original square wood goals. It was both quaint and traditional, but no one would ever expect they would become the center of controversy at the 1976 European Cup final, precursor to the current Champions League.

On May 12, 1976, Bayern Munich shutout St Etienne 1-0 at Hampden Park to lift the European Cup. Taking nothing away from Bayern Munich’s performance, Saint Etienne had plenty of reasons to think that they should’ve won. Namely, shots hitting the square goal post at Hampden Park.

The Blizzard’s James Horncastle recalled the match and its aftermath this way: “The following day, Saint-Etienne were welcomed back across the Channel not as losers, but as a nation’s champions,” adding that a crowd feted the players as they were paraded in a motorcade of Renault cars along the Champs-Elysees in Paris. Such was the story, that same publication picked it up again a few years later in an article by Robin Bairner aptly titled “Square Posts.” There’s even a wikipedia page devoted to the Hampden goalposts.

“Les poteaux carres” in French, that would become how St Etienne supporters remembered the final. It’s now a reference to the possibility of a better outcome, as fans and players alike argued that at least one of those attempts would have counted had the posts and crossbar been rounded. In March 2018, The Sunday Post showed photographs of just how close St Etienne had come that night in Glasgow. An article by The Athletic’s Sophie Serbini a few months later shows how the story has lingered in St Etienne.

Though the laws of the game only specify that, “The goalposts and crossbar must be made of approved material and must not be dangerous. The goalposts and crossbar of both goals must be the same shape, which must be square, rectangular, round, elliptical or a hybrid of these options” the old Hampden Park style hasn’t been allowed since 1987. By then, most of the world had already adopted the spherical aluminum posts.

Even those aren’t without controversy. In last season’s Europa League, then-Spurs manager Jose Mourinho noticed something about the crossbar at Tose Proeski Arena. “Before the game was a funny situation because my goalkeepers told me that the goal was small,” he said. “I went by myself and of course the goal was small. The goalkeepers, they spend hours and hours and hours in the goal so they know when the goal is not the right dimension.”

Simple fix, swap out the goal for another. Not so simple if the goal is made of wood and anchored securely into the ground. In the era of goal-line technology and mounting cameras to the frame, there’s no throwback to an earlier era of wood and sharp angles. That one at Hampden Park ended up an interesting souvenir.

Scotland’s The Sunday Post reported in 2003 that in “an act of Gallic masochism, Saint-Etienne Museum, based at the club’s Stade de Geoffroy-Guichard home, won a bidding war for the post that have such notoriety in their city, paying £17,000.”

In a story from the Scottish Football Association’s website in 2016, the curator of the Scottish Football Museum Richard McBreaty said he can understand why the goalposts mean so much. “Although Saint-Etienne lost that evening, the goalposts serve as a reminder of the great memories many fans have of that final, along with the bittersweet thought of ‘what could have been.'”

Since those goalposts were in place from 1903, the USMNT got to experience them on a Wednesday night in 1952. On April 30, they were on the wrong side of a 6-0 defeat to Scotland at Hampden. The United States wouldn’t return until November 12, 2005. That game ended 1-1 in a rebuilt Hampden with the same goalposts you’ll find everywhere else.