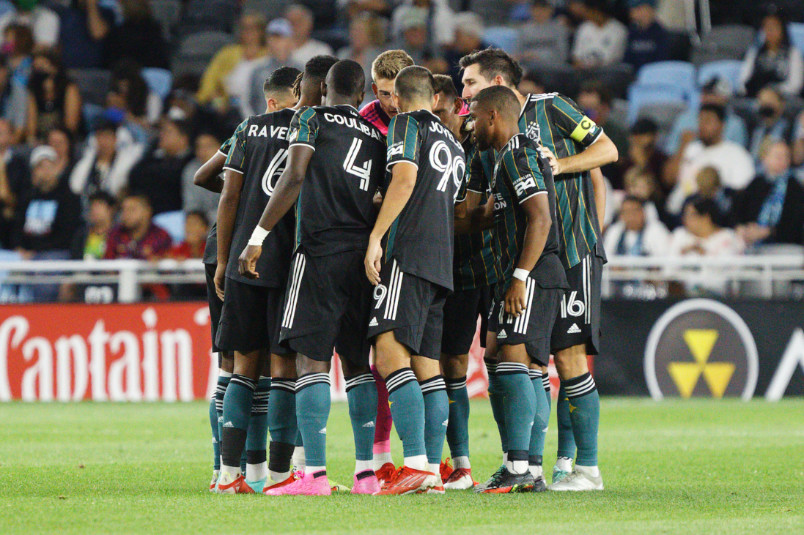 By Luis Bueno – RIVERSIDE, CA (Sep 29, 2021) US Soccer Players – Not too long ago, Major League Soccer revolved around Los Angeles. If the LA Galaxy wasn’t winning or making a run at MLS Cup, something was missing for the league. For a brief period of time, Chivas USA was also helping bring success and attention to Southern California. A couple of years ago, though, that success bottomed out. After the Galaxy won MLS Cup in 2014, the same year Chivas USA folded, the club went into a tailspin that lasted through 2018.

They got help in reestablishing LA as the major market for MLS. LAFC joined the league in 2018, and the Galaxy looked like it was refocused and re-energized in its attempt to get back to its winning ways. They finished 5th, meeting LAFC in the conference semifinals and losing 5-3 in Zlatan Ibrahimovic’s farewell game in MLS. It doesn’t get much more high profile than that in this league.

2020 wasn’t kind to either club. LAFC finished 7th in the West and exited the playoffs in the first round. The Galaxy missed the playoffs entirely, reloading in the offseason by hiring Greg Vanney as coach and signing Chicharito Hernandez. Both teams looked ready to turn the corner this season.

At a time when both LA teams should be fine-tuning things and jockeying for playoff positioning, they’re instead hanging on for dear life. The Galaxy hasn’t won a game in more than a month, and its grip on a playoff spot is getting weaker with each passing game. LAFC, meanwhile, is not even in the playoff picture. It’s tough for Los Angeles to be the center of attention when its teams are playing like this.

2021 was supposed to be the year when Los Angeles seized MLS by putting on a show every time out. Both of its teams would battle for Western Conference supremacy throughout the season, leaning on their superstars Chicharito and LAFC’s Carlos Vela. That would set them up for deep postseason runs, perhaps featuring another postseason LA derby. Instead, both the Galaxy and LAFC look destined for mediocrity.

As MLS returned to normalcy in 2021, the league has not been able to rely on the LA teams in contention. Fans, of course, turn out to both LA Galaxy and LAFC matches. Both teams are regularly on national television broadcasts, but that presence ends there.

Right now, the risk for the LA duo is both of them missing out on the playoffs entirely. Yes, the Galaxy is in 5th-place but that winless streak is dragging them down the table. Things do not look great entering October.

After a torrid 7-3-0 start, the Galaxy has all but faceplanted its way through the summer. The Galaxy is 2-8-6 since then, last winning a game on August 14 in Minnesota. That winless skid reached seven matches on Sunday when the Galaxy fell 2-0 at Austin FC. The match was the first time Austin FC had held a team scoreless since June.

September started off well for LAFC, with an important 4-0 win over Sporting KC. LAFC followed that up with wins over Real Salt Lake and Austin FC, but the last two matches have been poor. They let a late winner in against Portland and were punchless against San Jose. Both games were tough against teams also in the playoff picture. LAFC is even on points with San Jose and Vancouver at 33. The three teams sit three points back of RSL, in 7th-place, and five points back of the struggling Galaxy.

Then there’s the broader situation with the LA sports market. With so many professional and major college teams, success draws attention. The Rams and Chargers are now playing in front of sold-out crowds at the mammoth Sofi Stadium. The teams played there last season but without fans due to the Covid-19 pandemic. This season, with fans, the stadium has become a hot ticket. The Rams are adding to the appeal of tickets there with their 3-0 start to the NFL season. The Rams are early Super Bowl favorites while the Chargers have fared well as well as both teams look to remain competitive throughout the entire season.

The Dodgers meanwhile have the second-most wins in baseball, behind fellow National League West rivals San Francisco. The Dodgers will reach the postseason once again. If the Dodgers wind up playing the Giants somewhere along the way, the series will undoubtedly capture all of LA’s attention.

It’s a major ask from the MLS clubs in better times. Right now, both are looking at seasons that could’ve gone differently. Overreliance on key players means a downturn when those players are unavailable either due to international duty or injury. LAFC opting to move Diego Rossi only added to their current problems. MLS remains the league of the quick turnaround, and both LA teams may be looking for just that this offseason.