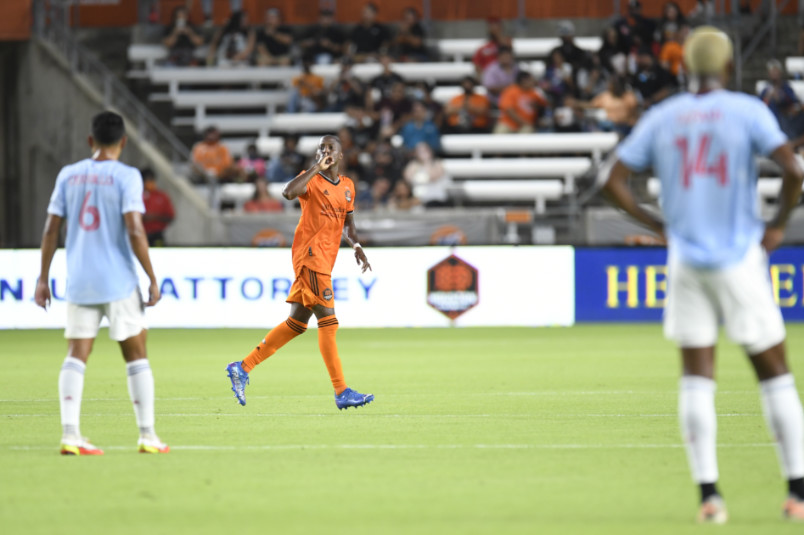 By Jason Davis – WASHINGTON, DC (Sep 1, 2021) US Soccer Players – As tourism efforts like to remind us, “Everything is bigger in Texas.” The phrase is likely rooted in the state’s sheer size, but it applies to many areas of life for Texans. Nobody does it bigger than Texas, with “it” standing in for food, football, and much more.

Soccer, however, probably doesn’t belong on the list. At least not if we’re talking about the 2021 Major League Soccer season. The MLS contingent of teams is bigger by one. Austin FC joined MLS originals FC Dallas and the league’s only relocated club, the Houston Dynamo. None of them are in a playoff spot as September arrives.

The best of the Texas trio is FC Dallas. It’s always a balance for the club formerly known as the Burn. The dual focus of winning games and developing players doesn’t always work in concert. The institutional commitment to giving young players a chance with the club’s senior team is admirable, but it makes achieving success in the league more difficult.

FC Dallas’s fortunes are largely defined by how much the club can get out of its academy-developed players, even as it actively engages in selling those same rising stars, and its effectiveness at signing more veteran players to lead the charge. Following a wild 5-3 victory in Austin, they climbed over LAFC and into 10th place in the Western Conference. The win was notable for being the club’s first in Austin in what should develop into a natural geographic rivalry, for the boost it provided in the standings, and the performance of a few of those homegrown stars.

Chief among them is striker Ricardo Pepi. He made headlines three different times over the last week: First for scoring the winning penalty kick for the MLS All-Stars in their win over the Liga MX All-Stars on Wednesday in LA, then for his decision to play for the USMNT over Mexico, and finally for the two goals, one assist performance he put in for FC Dallas in the win over Austin.

If there’s hope in Dallas that the season is not a lost cause, it rests on the shoulders of young players like Pepi, Jesus Ferreira, Paxton Pomykal, and Edwin Cerillo. They’re all getting the chance to prove themselves with the senior team. Whether or not that turns into a successful playoff push, there’s a countdown clock hanging over members of the squad.

That’s the situation for all of the young talent, with MLS embracing the concept of being a selling league. A player like Pepi turning into a star comes with the reality that the more success he has, the shorter his stay will be.

Pepi isn’t going anywhere this season, save for international duty. Becoming a part of the USMNT player pool complicates the club’s push for the playoffs, starting this weekend when it heads to Utah to play a playoff six-pointer against 7th-place Real Salt Lake. FC Dallas isn’t the only club missing important players as MLS schedules games during another international window. Still, losing Pepi is a significant blow.

The chances of the other two Texas teams pulling themselves into the playoff picture seem much smaller. FC Dallas’s traditional rival, the Houston Dynamo, is suffering through a difficult season under second-year head coach Tab Ramos.

Houston’s home loss to Minnesota United on Saturday left the club rooted at the foot of the Western Conference table alongside Austin FC. The club has gone more than three months without a win, its last coming on May 22 against the Vancouver Whitecaps.

What ails Houston is both obvious and frustrating. The club ranks in the bottom quarter of MLS in goals, expected goals, and goals conceded. The Dynamo is not the victim of bad finishing or unlucky bounces. Instead, they’re below the league median on both sides of the ball. An offseason overhaul hasn’t met expectations.

Houston’s bottom-of-the-table performance has already created a casualty. The club dismissed general manager Matt Jordan on Tuesday, ending his seven-year tenure in Houston. During Jordan’s run, the Dynamo, operating as a “small market” team despite the size and richness of the Houston area soccer market, made the playoffs just once.

The Dynamo’s ouster of Jordan follows a change in investor/operator. New York financier Ted Segal took over the club on June 22 after buying the controlling stake of the club from Mexican billionaire Gabriel Brener. There’s reason to see the Dynamo undergoing another overhaul this offseason.

In Houston, it’s simply about results on the field improving. That’s not the case in Austin. Though some MLS expansion teams tell a different story, the expectation is that it takes time to get things right.

Austin FC is in a tie with Houston for the fewest points in the Western Conference. They have a small advantage thanks to a game-in-hand via a quirk of the schedule, but that can’t be much comfort for a team that hoped for better things in its first season.

There have been good moments. Knocking off Portland 3-1 at home a few weeks ago certainly counts. Q2 Stadium is special. Whatever the club’s finish at the end of the regular season, the atmosphere in Austin is something the new team can build upon heading into 2022.

For the moment, MLS isn’t bigger in Texas. If the state wants to live up to the famous phrase when it comes to its fastest-growing sport, there’s plenty of work to do.