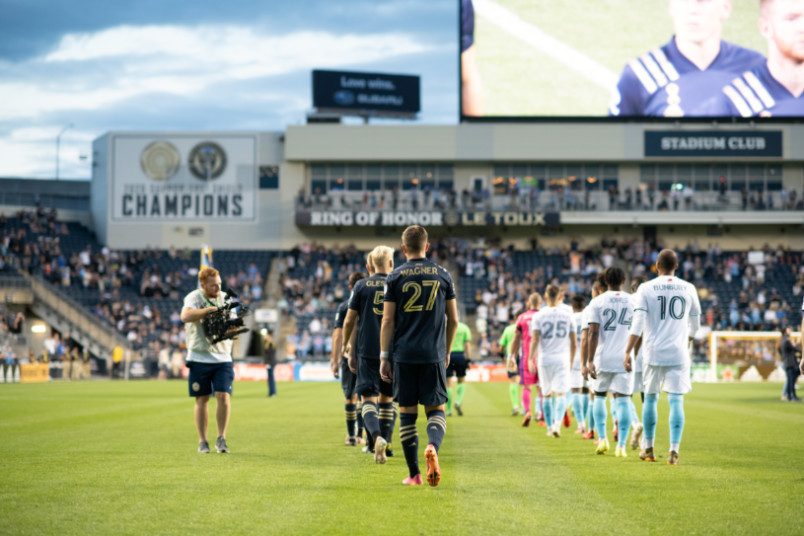 By Jason Davis – WASHINGTON, DC (Sep 17, 2021) US Soccer Players – Unless you’re a fan of an Eastern Conference rival, you might find yourself feeling bad for the Philadelphia Union. The Union won its first trophy in 2020, lifting a makeshift Supporters’ Shield at Subaru Park last November before later receiving the actual Shield. The Union finished with the most points in MLS after a challenging season. No pandemic asterisk required.

That trophy was supposed to be the beginning. Philadelphia’s rise to the upper echelon of Major League Soccer came through smart recruiting, quality coaching, and a well-run academy. Combining a productive developmental system and an effective foreign recruiting program to win trophies wasn’t exactly new in MLS. Still, the Union seemed to be laying the groundwork for more than just an occasional piece of secondary silverware.

2021 hasn’t exactly gone as planned. Philadelphia is learning that leveling up is difficult, especially when you engage with the business of selling players on the international transfer market. Heading into the weekend, Philadelphia is outside of the playoff places.

“We still sit in a decent spot in the table that a lot of teams would exchange with us gladly,” Union head coach Jim Curtin said on Wednesday before results bumped his team down to ninth. “But at the same time, we have a little bit higher standard now, too. I think obviously the press has a higher standard, the fans have a higher standard for us, the players in the locker room probably have the highest standard. And we’re disappointed now when we lose – we’re always disappointed when we lose, but now it’s, I think, a little bit more amplified.”

No team in MLS would have an easy time replacing the likes of Brenden Aaronson and Mark McKenzie. Both were homegrown players with large roles in procuring last year’s Shield. Both left over the winter for seven-figure transfer fees. Bigger spending teams would deal with that by bringing in talent while the next batch of youngsters grows into the team. It’s different in Chester.

By developing players as talented as Aaronson and McKenzie, the Union raised expectations. It’s living up to those expectations that’s proving a challenge.

On Wednesday night, the Union’s run in the Concacaf Champions League ended with a 2-0 home loss to Club America, exiting 4-0 on aggregate. Those were the club’s first games against a Liga MX team in international competition.

Philadelphia’s loss reinforced the stark reality that MLS remains well behind Mexico on the field. Club America’s dismissal of the reigning MLS points champion was as unsurprising as it was unremarkable. Far from a rout in either leg, the aggregate 4-0 scoreline and the Union’s inability to score even at home shows that Liga MX still has a distinct advantage.

That said, Club America benefited from a pair of deflections and a penalty kick. Las Aguilas scored a single goal from the run of play. It might even be fair to say that Philadelphia was unlucky.

“In these very tight moments, whether it’s play around the goal or the failure of the referee’s call, or with their goal they scored, the bounces that went their way,” Curtin said. “But hey, they’re a great team and they get those bounces.”

It’s not that the gap isn’t closing. It’s that it was so big to start that it doesn’t matter yet. The Union is also a victim of Major League Soccer’s design. The system is set up to prevent year-to-year excellence, not encourage it. Luck can only do so much. Without the quality and depth to compete on even terms with Club America, MLS will continue to come up short in the Champions League.

MLS still cares about parity more than it cares about winning on the international stage. Parity pulls teams back to the mean.

In other words, Philadelphia’s very good 2020 didn’t guarantee a good 2021. Any hiccup was capable of derailing the quest to contend in the Eastern Conference, much less repeat at Supporters’ Shield winners. The Champions League was always going to be a bridge too far in light of the year-to-year changes in the squad.

It’s not just the loss of Aaronson and McKenzie. Injuries and absences have waylaid some of Jim Curtin’s plans. Meanwhile, incoming signings meant to bolster the roster in a few key spots have often failed to live up to expectations. With margins as small as this, the Union can’t afford a significant drop in any area of the field.

Up and down form through the summer explains the club’s current spot in the standings. There’s still plenty of time to change that. The Union is just three points back of 4thth-place NYCFC, but there’s no presumption of an upwards trend while other clubs get out of the way. The work of an MLS club to just keep its head above water is neverending. The threat of a return to the abyss is ever-present.

The result aside, Wednesday night was encouraging for the Union and its fans. The goals never came, but Philadelphia played well. Club America coach Santiago Solari acknowledged the determination of the Union in his postgame comments.

“Philly is a very difficult team that fought from start to finish,” he said. “We had to work all for 90 minutes.”

The dream of lifting an MLS Cup is still alive in Chester. With the Champions League campaign over and a qualified success following victories over Saprissa and Atlanta United, attention can return to league schedule. Philadelphia gets no rest with Orlando City coming to town Sunday. Climbing back up the ladder is the priority.

Whatever the outcome of the season for Curtin and his team, the Union has an established identity. While that doesn’t guarantee them anything from season to season, the competence from the front office down to academy staff that runs through the organization provides the tools necessary to compete for a playoff spot every year for the foreseeable future.

That’s a lot more than most clubs in MLS can say. Union fans should recognize just how special their situation is. They support a club that can simultaneously develop talent good enough to garner multi-million dollar transfer fees and believe that each season could end with a championship. Believing is as much is a matter of faith until the club secures its first MLS Cup, but Philadelphia is already getting it right.