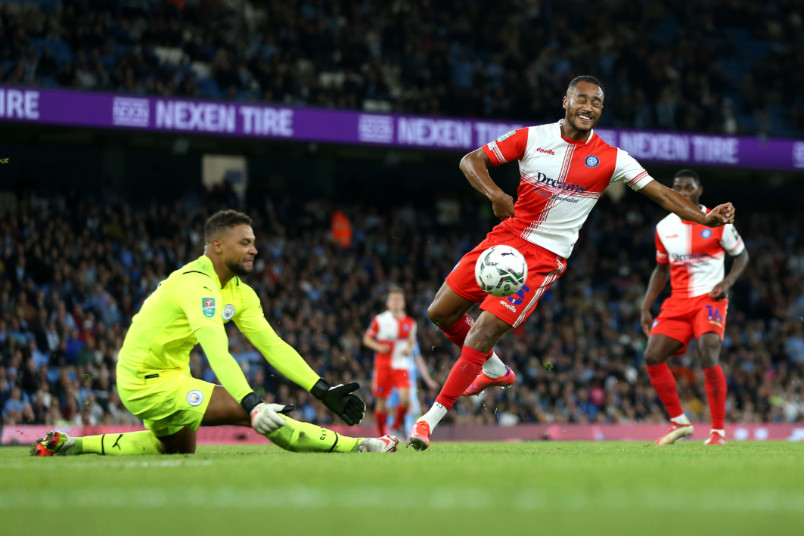 Wednesday’s soccer news starts with the third round of England’s 2021-22 League Cup. Zack Steffen was in goal for Manchester City’s 6-1 home win over Wycombe Wanderers. Falling behind in the 22nd minute, Kevin De Bruyne equalized for City in the 29th. Riyad Mahrez (43rd) and Phil Foden (first-half stoppage time) made it 3-1 at the half. Ferran Torres scored in the 71st, Foden added a second goal in the 83rd, and Cole Palmer made it 6-1 in the 88th minute.

“We have talented players,” Manchester City manager Pep Guardiola said after debuting six academy players. “We can count on them absolutely. They train with us every single day. They don’t make bad faces. They don’t make you feel uncomfortable in your decisions. They just have the desire to be something in world football. With their skills and desire – they got it at this club. I am so proud to be manager of this club.”

Tim Ream and Antonee Robinson weren’t in the squad for Fulham’s 0-0 home draw with Leeds, exiting 6-5 on penalties. Lynden Gooch missed Sunderland’s 2-0 win at Wigan. Nathan Broadhead scored in the 26th and Luke O’Nien added a goal in the 54th minute.

Josh Sargent wasn’t in the squad for Norwich City’s 3-0 home loss to Liverpool. The goals came in the 4th, 50th, and 80th minutes. Matthew Olosunde missed Preston’s 4-1 home win over Cheltenham Town. Andrew Hughes put PNE up in the 25th and Joseph Rafferty doubled the lead in the 37th. Cheltenham pulled a goal back in the 57th. Sean Maguire (82nd) and Emil Riis Jakobsen (three minutes into stoppage time) put the game away for Preston.

Also in the soccer news, Major League Soccer and Liga MX announced an expanded version of the Leagues Cup set to start in 2023. The revamp of the tournament will involve all the clubs from both leagues playing only Leagues Cup games for a month. The tournament will serve as a qualifier for the Concacaf Champions League.

“This is an example of coordination and goal alignment between the Confederation, MLS and Liga MX,” Liga MX executive president Mikel Arriola said. “All parties involved converged on the objective to provide the fans of North American Futbol and all over the world greater entertainment and spectacle, provide MLS and Liga MX clubs a more intensified competition schedule to raise playing standards and quality. In this way, economic benefits can be reinvested creating a virtuous cycle assisting the development of players, clubs, and marketing opportunities for futbol and sports in general.”

SI’s Brian Straus explains the changes for the Concacaf Champions League in the Leagues Cup era. The NY Times’ Kevin Draper looks at the potential impact of the tournament in the region as well as the additional games. The Athletic’s Sam Stejskal works through the FC Dallas coaching change. Derby County entering administration sends them to the bottom of the Championship table on -2 points. FourFourTwo has Liverpool expanding its stadium.