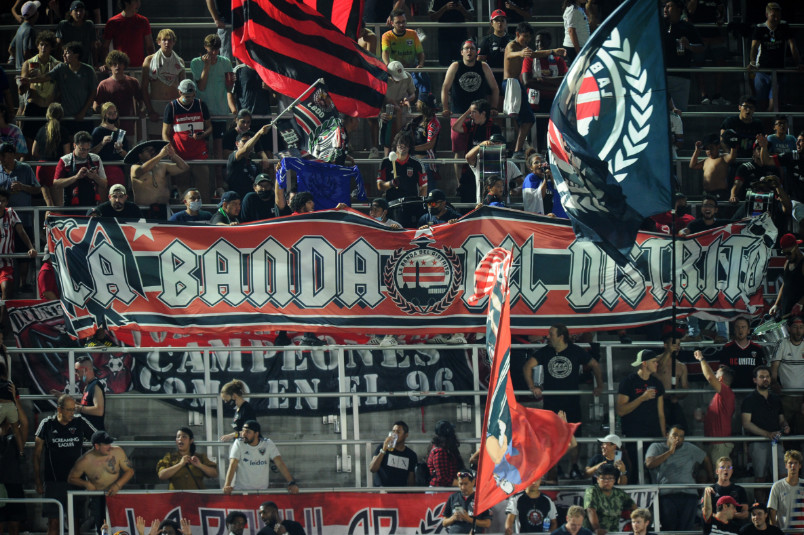 By Jason Davis – WASHINGTON, DC (Oct 27, 2021) US Soccer Players – When the moment came, DC United didn’t respond. As harsh as that sounds, the club put in its worst performance of the season in a crucial game with an Eastern Conference playoff berth on the line. Saturday’s 6-0 loss in the Bronx against NYCFC not only prevented United from gaining important points towards making the playoffs, but it also boosted a direct rival for one of the six available spots.

DC missed several key players, including Andy Najar, Yordy Reyna, Edison Flores, and Paul Arriola. Talent changes games, but things got away from United quickly at Yankee Stadium. Their chances of getting anything out of the game came and went early. Calamitous play at the back gifted the New Yorkers three goals and put coach Hernan Losada’s team in a hole it could not escape.

“The game was over after 10 minutes,” Losada said. “That is painful.”

Painful, and potentially costly. While the loss and how it happened certainly didn’t help their cause, DC remains alive in the playoff race. Winning out in the final three games of the regular season would almost certainly get the club into the playoffs, though it will need some help to make it in.

Should they make the playoffs, it immediately changes the scope of the season. If they’re watching from home, wondering what might have been, the difficult questions start sooner and resonate louder. Processing the failure in the Bronx will be only one part of the postmortem on a transitional year for a team still looking for the path back to relevance that suits its unique place in the MLS ecosphere. The big question that looms for both fans and United’s leadership is how to measure success in 2021.

Would finishing 8th or 9th be progress? If it’s measured only by the standings, then 2021 would look more like a problem. United made the playoffs in 2019 as the 5th-place team in the Eastern Conference, bowing out of the postseason in the first round. The club finished one spot higher in 2018 but also lost in the first round.

It’s important to point to the bad years mixed in with the playoff seasons, including an 11th-place performance in 2017. Still, it’s worth the reminder that United hasn’t spent years as an also-ran. The problem was never about getting into the postseason. Instead, it was being good enough to make a playoff berth count.

That moves the conversation from not just where Losada’s team ends up in the table but how it plays. In contemporary soccer, there are many ways to view effective play. Results will always trump any other metrics. However, advanced analytics paired with very simple concepts like entertainment value are part of the evaluation.

There’s no denying that under Losada, DC United is more entertaining to watch. Because the club is shorter on resources than some of its Eastern Conference rivals, he’s working with less. The difficult part for fans is figuring out what that means in this version of MLS. It should go without saying that this is still early in the process for DC United, and the club’s investor/operators are making their intentions clear. First, it was hiring Losada. Then, it was bringing in former Atlanta United head of recruitment and analysis Lucy Rushton, arriving in April as the club’s new general manager.

General managers, too, are facing increased expectations. Houston, San Jose, and FC Cincinnati fired general managers or the positional equivalent during the season. The level of accountability is on the rise, but it raises another difficult question. Because of Major League Soccer’s parity-driven competition model, it’s tough to pin down how long the builders of rosters and the head coaches they often hand-pick should get to turn things around.

MLS has always leaned into stability on the soccer side, at least when compared to leagues elsewhere in the world. While results always matter, coaching roles can be broader here. Instituting whole programs with overarching soccer philosophies that can set a club up to win for years can be part of the job description.

With that level of difficulty, clubs can struggle finding the right fit. FC Cincinnati’s move to bring in Chris Albright from the Philadelphia Union speaks to a new trend for technical personnel with MLS experience. Reports that Houston will hire former goalkeeper and current Columbus Crew technical director add to it as well. Albright will be responsible for hiring FCC’s next head coach, while Onstad inherits Tab Ramos.

In either case, the question of how to measure progress looms large. Cincinnati has never had any in MLS. If Albright can simply make his new team competitive in 2022, that’s success. Onstad will have a slightly different task in making the Dynamo competitive again. That would be progress, but his bar should be higher for a club with such a proud history.

Then again, no one quite knows what’s possible for Major League Soccer’s struggling clubs season-to-season in the modern version of the league. A team like Colorado can surprise with an excellent regular season under Robin Fraser with the league’s lowest payroll. That sets a bar, but the main proof of concept is always going to be the playoffs. It doesn’t matter how a club gets there. It’s what happens in knockout scenarios.