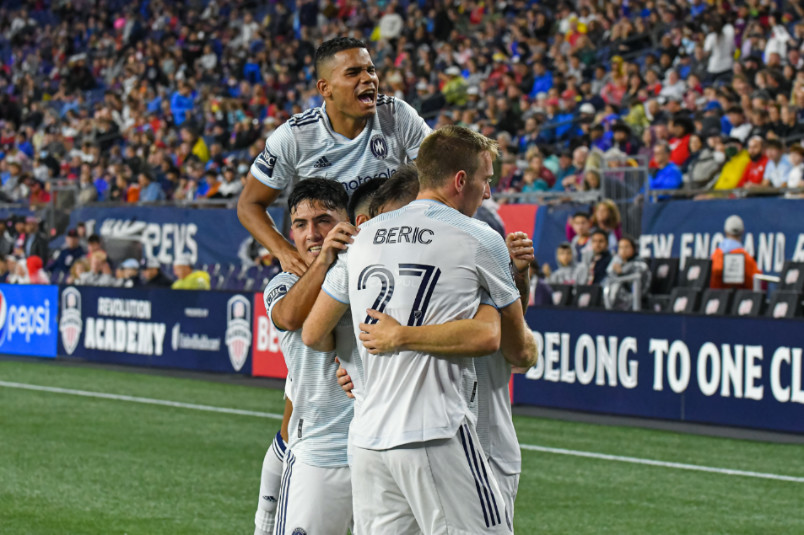 By J Hutcherson (Oct 19, 2021) US Soccer Players – Wednesday night will be round 31 of the 2021 MLS season, leaving just three more matchdays to figure out the rest of the playoff places. As it stands, only the conference leaders are in the postseason. New England beat Seattle to that obvious certainty, sitting at the top of the Supporters’ Shield table and waiting for the math to catch up and award them the regular season title.

On the other end of the tables, Chicago, Toronto, and Cincinnati are out of the playoffs in the East. Houston and Austin join them in playing out the schedule in the West. Everyone likes a late-season spoiler when it’s not happening to their team, and those five clubs are now playing to disrupt. Just not on Wednesday, at least for most of them.

Cincinnati hosts Chicago on Wednesday in a game that certainly counts for them but matters not at all for the rest of the Eastern Conference table. Toronto is at Inter Miami, a team also waiting for the math to catch up and officially knock them out of playoff contention. So much for the Eastern Conference disruption, where seven points separate 2nd through 7th-place in the East and NYCFC and New York are both a point out of the playoff picture.

The West may have separation between 3rd and 4th, but 2nd-place Sporting Kansas City only leads 3rd-place Colorado by a point. A point also separates 5th-place from 7th. Vancouver is a point out of the playoff spots in 8th, with the musical chairs scenario potentially looming for Real Salt Lake in 5th, the Galaxy in 6th, and Minnesota United in 7th.

Houston hosts the Galaxy in a game that could cause issues. The Dynamo beat Seattle on Saturday, after all. With the Galaxy looking to continue its momentum following a 2-1 home win over Portland, Houston is in prime position to cause problems. Another surprising Houston home win, combined with Minnesota taking three points from a cross-conference home game with Philadelphia and Vancouver beating Portland away, and it’s the Galaxy joining LAFC just out of the playoff picture. With the Galaxy tied on points with Real Salt Lake, a Minnesota win would see them pass both since RSL doesn’t play again until Saturday. It’s a spoiler scenario when they do, making the trip to Chicago.

Sporting KC is also idle midweek, adding to the pressure for the 3rd hosting 1st game at Dick’s Sporting Goods Park. All three of the top teams in the West lost over the weekend, and it’s an open question which was the bigger disappointment. Seattle lost at a team heading out of the playoffs. Colorado was down 2-0 at Real Salt Lake when they scored in the 73rd. It was RSL with the late goal, getting it six minutes into stoppage time.

“I’ll keep it simple and keep it real,” Colorado midfielder Younes Namli said. “It was just not good enough. They get a goal way too early and we already knew that getting wide and getting crosses towards (Damir) Kreilach, that’s what they have pretty much success with. We let it happen anyway. When you concede a goal that early you have to try and go and chase. You have to score two goals to win the game. We had a period in the second half where we were close to getting the 2-2, after we bounced back with the 2-1. Overall, I’m not going to lie, it was just not good enough. That’s how simple it is.”

“Just not good enough” should resonate across the top of the Western Conference. This is no time to leave enough space where other teams start entertaining unlikely scenarios. This version of MLS parity should push teams to play out their own finale over the remaining games, taking control of their futures.

Easily said, but in a streaky league no one can afford to create issues late in the season. That makes New England’s 2-2 draw with Chicago interesting. A team that seems to almost always find the winning goal didn’t, at least suggesting that momentum could end up an issue. Or, as Revs coach Bruce Arena put it when speaking to media, “oh yeah, we should’ve won that game.”

New England has created such an overwhelming expectation this season, that even wins require explanations. The Revs don’t win by enough. Putting games away could end up a big issue in knockout scenarios next month. Meanwhile, the rest of the conference and the rest of the league struggles to put together a stretch run.

It’s an interesting time for MLS, with options still there for teams that have struggled significantly. It may not even require maximum points from the remaining games. At least for some teams this season, hanging around could end up being enough.