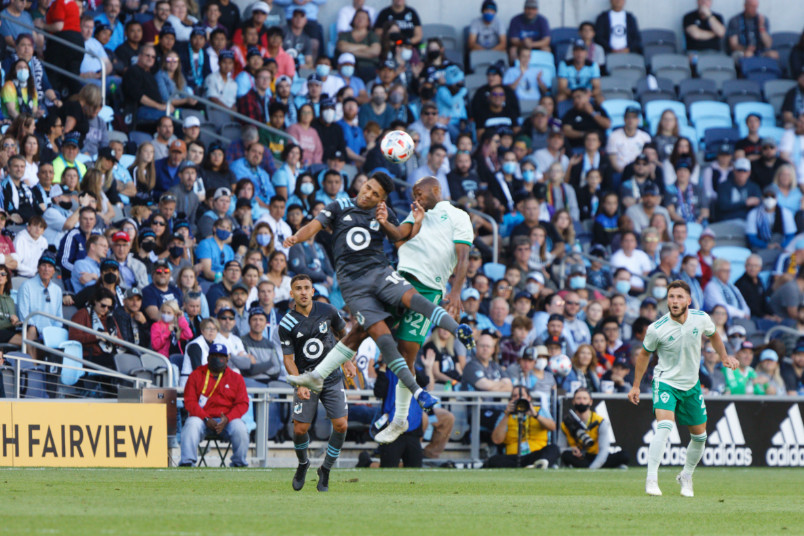 Monday’s soccer news starts with four games from MLS on the weekend schedule. The Red Bulls shut out Inter Miami 1-0 at home. Patryk Klimala scored the game’s only goal in the 25th minute and Carlos kept the clean sheet with one save. Philadelphia beat FC Cincinnati 2-1 on the road. Kacper Przybylko scored for the Union three minutes into first-half stoppage time and Paxten Aaronson doubled the lead in the 56th. Cincinnati’s Haris Medunjanin pulled a goal back in the 82nd minute.

Seattle beat Vancouver 4-1 at home to add three points to the top of the Western Conference table and clinching a playoff spot. Shane O’Neill scored for the Sounders in the 5th and Nicolas Benezet doubled the lead in the 14th. Vancouver’s Brian White scored a minute into first-half stoppage time. Will Bruin (55th) and Leo Chu (90th) finished off the scoring for Seattle.

“I think that’s an awesome accomplishment,” Bruin said of making the postseason. “That just shows you the standard this club holds itself to because there’s been many players that have come through in those 13 years and the standard of the club has never faltered. So, I think it’s a great testament within itself. There’s still work to be done because we want to have home field advantage through the playoffs and win first in the West.”

On Sunday, Colorado came back to beat Minnesota United 3-1 at Allianz Field. Adrien Hunou put United up in the 8th minute. Colorado played a man down from the 57th minute after a red card to Danny Wilson. Cole Bassett equalized from the penalty spot in the 73rd minute. Michael Barrios made it 2-1 in the 84th and Lucas Esteves scored three minutes into stoppage time.

“You have to move the ball,” Minnesota coach Adrian Heath said. “You have to move it quickly. Side to side. Get people in little holes. Get the little passes playing. Little combination play. Not long, straight balls, because, for a lot of central defender, that’s food and drink. And that’s what we’ve done today. We got desperate and played desperate instead of playing our football, which was getting us the opportunities.”

Grant Wahl’s takeaways from the USMNT’s loss in Panama. The Washington Post’s Steven Goff’s match report from Estadio Romell Fernandez. Goal’s Ryan Tomlich with an up and down USMNT in the October window. MLSsoccer’s Charls Boehm works through what happened in Panama City. The Athletic’s Paul Tenorio has what went wrong with the USMNT’s plans in Panama.

World Cup qualifying on ESPN Deportes: Japan vs Australia at 6am. ESPN2 has Denmark vs Austria at 2:45pm ET.