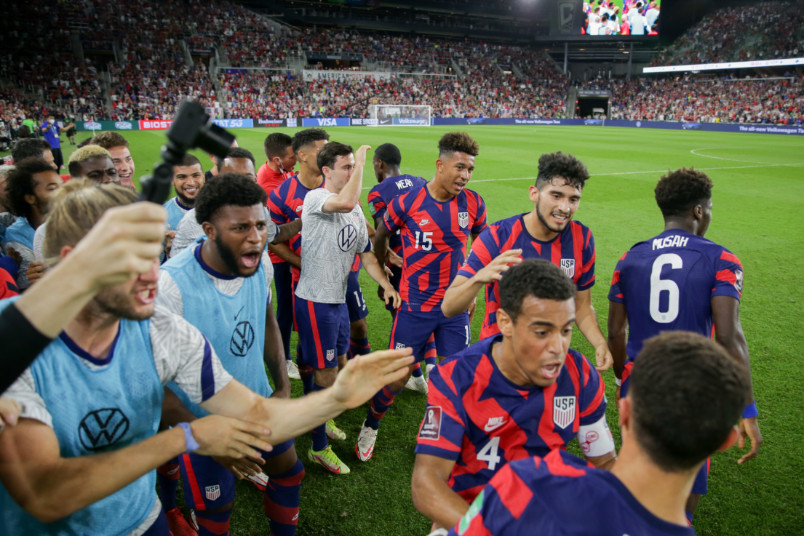 By Charles Boehm – WASHINGTON, DC (Oct 14, 2021) US Soccer Players – Lower.com Field is a beautiful, thoughtfully-constructed new downtown stadium. With its steeply-pitched stands, sweeping roof, and absurd variety of food, beverages, and premium club areas, it feels as though its builders spared no expense or overlooked any detail. It’s a drastic contrast to its predecessor Historic Crew Stadium at the Ohio Fairgrounds a few miles up the road. That was a watershed building in US soccer history but constructed on such a tight budget that fans affectionately nicknamed it “The Erector Set.”

That made Ohio’s capital city a suitably symbolic site for the USMNT’s World Cup qualifier on Wednesday night. For all the history and memories made at the old venue, the lineup that took the field at the new place was younger on average than Crew Stadium itself. These players know about the past. They have a coach who lived it during his playing days. Yet it’s so far removed from their reality as to be of limited use to their immediate task of surviving the Concacaf Octagonal round and booking a place at Qatar 2022. This week’s visiting opponent only heightened the contrasts.

“Costa Rica, one thing I’d say, it’s a veteran team, but it’s a group that’s been through it,” USMNT coach Gregg Berhalter said on Tuesday. “A lot of these guys played in the 2014 World Cup together and this is a group that’s been together for a long time. And there’s certainly strength in that. And there’s certainly an advantage in that. For us, it’s just the opposite. We’re a young up-and-coming team, and we have to use that to our advantage.”

And so they did. Wednesday played out like a microcosm of the qualifying journey so far. The Yanks stumbled at first, conceding a quirky goal barely 60 seconds after kickoff. Then they gradually came to grips with the circumstances and shifted through the gears, flashing that rich potential as the grizzled Ticos labored to keep pace. While it wasn’t quite perfect, it was promising.

“In the beginning we weren’t sharp enough,” said man of the match Sergino Dest. “But after a couple minutes, we came into the game and created more chances, we were in their half. So the mentality of this group is still right. We work together, we do it together. We won the game and that’s the most important. So we got three points, and this group is tight right now.”

The game-winning goal had quirky elements of its own. A series of caroms turned a Timothy Weah shot into an own-goal credited to substitute goalkeeper Leonel Moreira. It was also a just reward for the hosts’ energy and vibrancy. The group came to grips with the challenge in front of them, learning as they went, reminding us why and how they have been a second-half team for most of this year. The home crowd responded, roaring them onward up to and beyond the final whistle. Columbus felt different this time around but still felt like Columbus in the end.

Calling the age and inexperience of his squad “basically unheard-of in international football,” Berhalter repeatedly praised his troops’ adaptation in his postgame remarks.

“For us to be navigating through this Concacaf qualifying, which is a bear, a monster, with this group, and the amount of poise they showed on the field today,” he added, “particularly going down a goal and then the second half being up a goal, managing the game really well – Gianluca Busio comes on and he was playing like he’s 30 years old. So I’m proud of the effort. The guys showed a lot of poise. And they’re growing, they’re growing as a team.”

In all walks of life, youth tends to offer energy and enthusiasm, and also occasionally naivete and hubris. Dest admitted that the September window was a reality check for him and his teammates. There’s only so much you can prepare in the abstract for the travel. The conditions. The sly gamesmanship and occasionally brutal physicality that this region’s smaller nations often utilize to shrink the talent gap between themselves and established powers.

Having entered that trio of matches with optimistic talk of taking all nine points on offer, the US left it with five. They’re aware that things could easily have gone worse. Sunday’s 1-0 loss at Panama was an even more sobering punch to the face.

“Yeah, it did a lot to me,” said Dest of last month’s journey. “We had five points first window, but I felt like we have a lot of really good talent, we have a good team, good players. So I feel like we can win even more games, you know? We should because it’s really important. we all want to compete in the 2022 World Cup. So I think it was an eye-opener for us, because for me it was the first time, for some of the guys it was the first time.”

As many lessons as they had to absorb, the USMNT head back to their clubs in 2nd-place in the Octagonal, on course for successful qualification. Plenty of difficult tests remain. Mexico visits next month in Cincinnati. The trips to Mexico City and San Jose, Costa Rica that are traditionally so arduous still lie ahead. A January date at a resurgent Canada figures to be a new and rigorous obstacle.

If these young Yanks can maintain the steep upward trajectory of their current learning curve, there’s ample reason to expect arrival at the desired destination.

“All of World Cup qualifying is difficult. All of World Cup qualifying is challenging,” Berhalter said. “And sometimes I feel like people forgot that, and people think it’s a cakewalk, and we’re going to play the youngest team in the history of US Soccer in a game and we’re just going to breeze through these games. It’s not realistic. What I will say is that the guys fight and the guys give everything, and that’s all you can ask.”