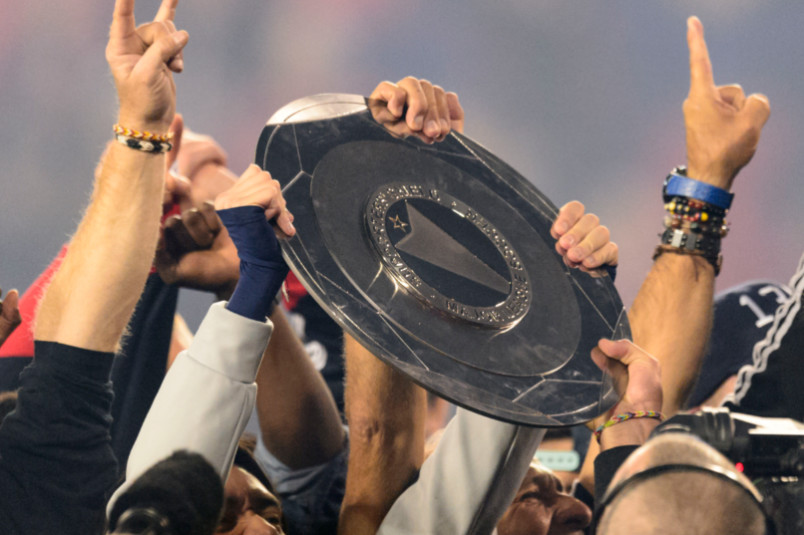 By Charles Boehm – WASHINGTON, DC (Oct 29, 2021) US Soccer Players – Earlier this week, the New England Revolution clinched the 2021 Supporters’ Shield for the best regular season record in Major League Soccer. It was a statement for a club tied for last place in the Eastern Conference with a league-worst -19 goal differential when Bruce Arena took the helm in May 2019.

Arena called the Shield “a great accomplishment for our team” that “means a lot to the club.” No coach in MLS history has won it more often. He’s now topped the table four times with three different clubs over a quarter-century span. Only two others, Sigi Schmid and Thomas Rongen, have even won it more than once.

The Shield itself is the creation of early supporters’ groups. Passing the hat for funding, the idea was to recognize the regular-season winner in a league where the emphasis is on the playoffs. The season is about achieving over a long schedule rather than the randomness of a postseason tournament.

It took years to win over even tacit support from a skeptical league office. The Shield officially launched in 1999. In 2006, it qualified the winner for the following year’s Concacaf Champions League. MLS hasn’t ever really wavered from its commitment to a US-style sporting model with playoffs to decide its champion. It’s a core principle as fundamental as parity and centralized authority. However, they did eventually recognize the value of what their most dedicated fans had built.

This week showed that the Shield as an achievement remains a contentious topic as pundits and skeptical fans seized on an old statement from Arena. Never one to shy away from a controversial statement, back in 2012 he took issue with the unbalanced schedule and, with it, the idea of awarding the
Shield.

“The playoff thing is one thing, but I think that the whole construction of the schedule this year with an unbalanced schedule is stupid. Absolutely stupid,” he said back then. “To have a Supporters’ Shield for that is stupid. I don’t know how that ever got through. I think I can tell you that most people think it’s stupid. It has not achieved anything or doing anything better in marketplaces and I think that without a doubt, the way to put together a schedule in this league is home and away. Period, end of discussion.”

Plenty of us in North America admire the norm of a simple league champion, and the competitive elegance of the everyone plays everyone-home and home found in many leading soccer nations. While some see the Shield as an organic, hard-won nod in that direction, others find it easier to conclude that it doesn’t carry that much meaning.

The issue flared up a year ago at the tail end of the drastically delayed, reshuffled, and pandemic-impacted 2020 campaign. COVID-19 had stymied even the baseline concept of every team playing the same number of matches, and many games happened in front of reduced or nonexistent stadium crowds. So in light of all that, the Supporters’ Shield Foundation, the fan body that oversees the trophy, announced that there wouldn’t be a winner that season.

That set off a storm of controversy. After players, coaches, and members of the Independent Supporters Council registered their displeasure with the decision, especially in the context of enduring a global pandemic, organizers reversed it in a matter of days. The episode drove home the imperfect nature of the Shield’s criteria and the strong desire to award the trophy anyway.

There was a brief phase in which MLS adopted the European convention. In 2010 and 2011, the league played a balanced schedule with 16 and 18 member clubs playing 30 and 32 games each, respectively. Arena’s LA Galaxy won the Shield both years.

In retrospect, this period was an accident, an alignment of circumstance as much as anything else. It was still early in the ongoing expansion era, and the numbers happened to work out. The competitive equilibrium came at a cost of increased travel for clubs on the coasts, much of it long-haul. Every team logged 30,000 air miles or more in 2011, and the Vancouver Whitecaps doubled that thanks to their far northwestern placement. That was not only expensive but unbalanced in its own sense.

“It’s simple math: 389 games would almost be impossible for us to execute with the other competitions we’re required to play, the weather issues we have … the challenges in a handful of markets, the FIFA dates. All the things we have to do differently in the United States from a competitive standpoint, just the travel impact that exists in our country,” MLS commissioner Don Garber said in explaining the return to a regional approach as the Montreal Impact joined for 2012. “I know fans want things a certain way because they watch the Premier League, but we have certain facts of life in the United States that we have to live through.”

MLS will welcome its 28th member club, Charlotte FC, in 2022, with at least two more still to come. Following the European convention would require a 54-game slate, a huge jump from the 34 that’s become the standard. That means an even longer or more compressed season and even more flying than the amounts that gave everyone pause a decade ago, this time with many more charters in the mix. It’s wishful thinking that Garber and his owner/investors would swallow that in the name of competitive purity. In fact, they’ve more recently moved in the opposite direction.

In 2019 the calendar got cropped in pursuit of improved television ratings and less winter chill in the postseason. Regional scheduling also allows for the elevation of the rivalries they adore. In August 2023, they’ll roll out a month-long, league-wide, midseason Leagues Cup tournament in partnership with Liga MX, yet another sign that MLS sees its current structure in need of a jolt or two. Cold-weather markets in Canada and the northern US have already hit the limits of their outdoor seasons at the year’s start and end.

Arena isn’t exactly a Europhile. He, like most of the league’s executives over the years, is unlikely to rank those Shields over his five MLS Cup titles. Still, his advocacy for a balanced schedule with less variance in conditions and strength of opponents hints at a purist streak. He’s not alone in that.

The Shield’s fight for survival may have bolstered its legitimacy in the long run. Successive generations of hardcore supporters have embraced it in greater numbers. Only seven teams to date have “done the double” by moving on to hoist MLS Cup after a top regular-season finish, driving home the degree of excellence required. It says something about the supporters of MLS teams old and new that the Shield matters, that they continue to have the last word on their creation.