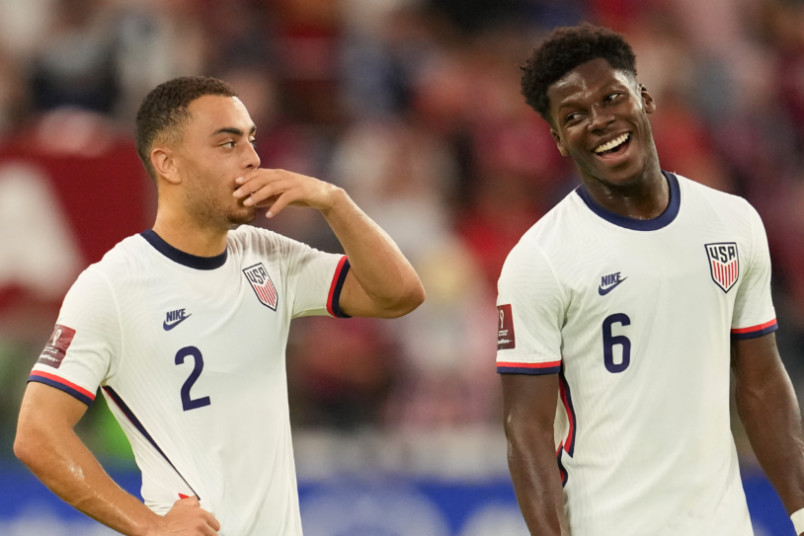 By Charles Boehm – WASHINGTON, DC (Oct 8, 2021) US Soccer Players – Thursday night in Austin was another moment for the USMNT youth movement. An 18-year-old making his second-ever World Cup qualifying appearance scored both goals. A central trio with a combined age of 63 bossed the midfield. A couple of quick, skillful 20-year-olds dominated the flanks, each chipping in an assist. As has become their habit, after a promising but incomplete first half, the USMNT found another gear after intermission. The opposition could not keep pace.

The starting XI for the 2-0 win over Jamaica was the second-youngest the program has ever fielded for a World Cup qualifier. The youngest lineup? That would be their previous game, the 4-1 road win over Honduras last month. Ricardo Pepi, Yunus Musah, Brenden Aaronson, and Sergino Dest can’t yet legally buy a beer in the nation they represent. Yet, they turned in several of the most impactful performances as the Yanks climbed into 1st-place in the Concacaf Octagonal standings. The kids also bagged the result with an entertaining degree of flair and seemed to be having fun as they did it.

“I don’t even think we think of ourselves as young guys anymore,” said Aaronson postgame. “We’re put in a situation where the whole country is looking at us and we need to perform. And everybody takes on this challenge. I mean, if you look at Pepi, he goes out there and does his thing tonight. Yeah, me, Sergiño and Yunus – Yunus isn’t even nervous before the game, we’re all smiling, we’re just having a good time and then we just go out to the field and just have a great time and just show our country what we can do.”

The USMNT youth movement is not a new story, of course. Nor can the domestic developmental landscape be credited for everything about it. Musah, Dest and others are dual-nationals who received their soccer educations abroad. What makes the Jamaica win a milestone in this process is that this was achieved not by a few wunderkinds sprinkled into a typical squad.

Christian Pulisic and Gio Reyna, considered by many to be the standard-bearers of this generational shift, are out injured. Other key figures had to miss out in September, and others will miss out in future windows. The unprecedented intensity of this compressed qualifying schedule has forced USMNT coach Gregg Berhalter and his fellow coaches to call in larger rosters and reach deeper down that list to execute their plans.

Berhalter has named 29 different players to gameday rosters over the first five matches of the Ocho. With five more players making their qualifying debuts on Thursday, 21 of those who’ve appeared in these first four Octagonal games entered this process with zero qualification experience. More debutants are likely to follow.

The concept of the so-called “full-strength” lineup is evolving dramatically for soccer in the age of COVID, just as the physical and psychological demands on the athletes have ratcheted upward. While the USSF staffers of years bygone could scarcely have predicted it, all this has heightened the value of energetic young legs that can maintain high output and recover quickly. The rise of up-tempo pressing tactics further enhances these ascending intensity levels. On Thursday, those and many other pieces seemed to fall into place.

“We talked about, that word verticality, we said we want to get behind them. We want to stretch them. We want to play forward quickly, and we did it, and that’s good,” said Berhalter. “The wingers, when you think about Paul [Arriola] and Brenden, I would hate to play against those guys. They’re relentless. They don’t stop. It’s annoying. As the coach watching them I’m like, ‘Oh my god, you guys aren’t stopping, you keep going,’ and they harassed those defenders the whole time. It was really an incredible performance from the two.”

It can’t be entirely coincidental that those two play for clubs that have embraced the high press, goosing the throttle at every opportunity in every game. Suddenly two areas of concern for fans fretting over the loss of two stars became positions of strength. Replacing one of them with a menacing scorer and reigning Ligue 1 champion in the form of Tim Weah felt like a luxury.

Many of Thursday’s standouts have been racking up serious mileage for both club and country this year, not just on the field but in terms of air miles and hotel nights. It’s not that they’re not tired. It’s just that the word takes on a different scale for a 30-year-old than a 20-year-old.

“We put up the minutes of the past week, and [Pepi] was dragging,” Berhalter said. “He played 90, 90, 90 [for FC Dallas], now he comes in here and plays whatever he played [68 minutes]. But we knew it was going to take a lot of mental courage for him to step up and really play with that relentlessness that we needed, and he did it. Brenden was another guy that we’re looking at his minutes in the week,” noted the coach later in the press conference, “and it’s 90, 90, 90 in Champions League games. And he flew across the world to get here and we thought that he wasn’t going to be able to do it, or it was going to be difficult. And he performed really well.”

It’s worth noting that consistency is a common pitfall for young professionals. That’s the next obstacle as the scene shifts to Panama for Sunday’s match. Los Canaleros are infamously difficult to play against. The USMNT’s kids are likely to be presented with some uncomfortable situations. Berhalter took pains to warn everyone about complacency or arrogance creeping in. Pepi’s words about his own meteoric rise apply well to the team as a whole.

One of the central developmental priorities of the 21st century for North American soccer as a whole has been the need to guide promising players into higher-level competitive and learning environments at younger ages. The idea is to spot talent earlier, introduce advanced concepts sooner, and build a pathway that can consistently challenge players as they mature. In doing so, the curve of potential growth is both shortened and elevated. The ceiling for individual players, and by extension the national teams, rises in turn.

It took longer than its creators probably expected or hoped. Many of the projects launched to facilitate the process didn’t outlive the players they helped produce. But now, things are changing.