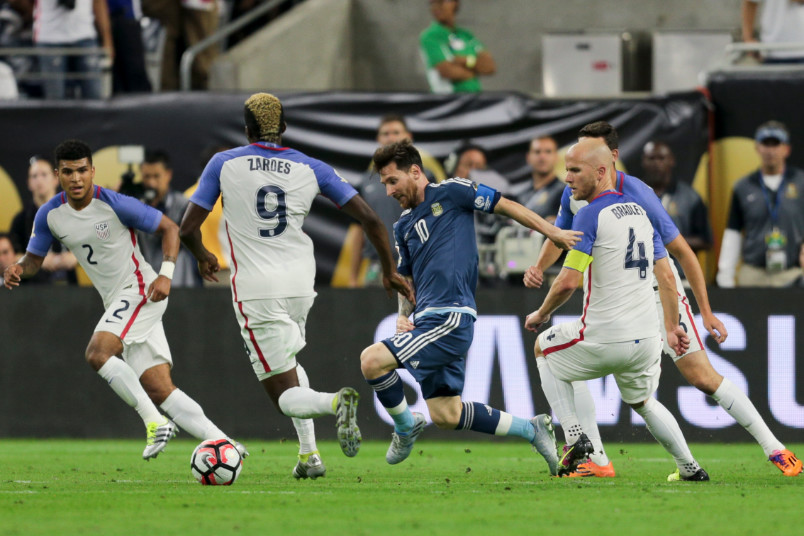 By Clemente Lisi – NEW YORK, NY (Oct 11, 2021) US Soccer Players – The biggest transfer moves of the summer involved the world’s two best players. Lionel Messi’s departure for Paris Saint-Germain in August, followed a few weeks later by Cristiano Ronaldo’s return to Manchester United, marked a transfer season like no other. The race is now on, once again, for which of the two will have the better season.

Messi or Ronaldo is the standard argument in world soccer. They’re both so good over so long a period that their only real competition is each other. It’s a debate we may never get an answer to, given how great both players are, but also how differently they play. Just like comparing players from different eras is difficult, Messi and Ronaldo have distinct skills and both bring strengths to their teams.

Comparisons between the two continue as the 2021-22 season is just getting underway. Ronaldo is now 36 and has naturally lost some of his pace. As a result, he has adapted his game to become an even bigger threat in the box, dangerous with both feet and in the air. By contrast, Messi is younger at 34 and continues to let his speed and pinpoint passing dominate his game.

Messi and Ronaldo are similar in that play revolves around them. Both remain a focal point of their respective attacks and always part of big plays. All we’ve heard since Messi joined PSG is just how incredible the team’s attack will be. Those plaudits have come with good reason. Any front line that features Messi, Neymar, and Kylian Mbappe, would have anyone salivating.

Before Messi’s signing, PSG coach Mauricio Pochettino utilized a 4-2-3-1 formation. That would often mean Angel Di Maria on the right wing, with Mbappe in the center and Neymar on the left. Mauro Icardi would often serve as an alternative for the starting Mbappe. As a center forward, Mbappe has been phenomenal. He scored 27 goals in 31 Ligue 1 games last season, an extremely impressive scoring rate especially since PSG wasn’t the runaway winner.

With Messi, PSG has switched to a 4-3-3 with the Argentine playmaker drifting to the right in place of Di Maria. It was that formation that recently helped PSG down Manchester City 2-0 in the Champions League with Messi scoring.

Under Pochettino, Neymar gets the freedom to roam since he can dribble and take on defenders one-versus-one. It is true that Messi makes his teammates better, even in squads loaded with stars. He did it at Barca and with Argentina, as evidenced by this past summer’s Copa America title. Providing balls for Neymar and Mbappe from the right side has been what PSG has done this season when the three have played together from the start.

Di Maria’s role at PSG has been that of hybrid playmaker-winger, which now falls to Messi. With Messi, PSG has enhanced its ability to generate even more offense. That’s something that could lead to an avalanche of goals in the coming months. Playing Neymar and Messi closer together to the middle of the field allows Pochettino to use his wing backs, primarily right back Achraf Hakimi, to push the team offensively. That will certainly help Messi link up with Mbappe and Neymar, the heart of PSG’s offense and the key to success.

Messi will again need to channel both his speed and passing game to serve primarily as an inside forward. That could be a tall task for a player past the age of 30, but Messi has shown so far that he can fill that role. It’s primarily what Pochettino will be looking for in his lineup during the Champions League, the point of bringing in so many high-value players.

Ronaldo’s situation at Manchester United is slotting into an existing system. United primarily played a 4-2-3-1 last season under manager Ole Gunnar Solskjaer. In attack, Edinson Cavani served as a lone striker, supported by the trio of playmaker Bruno Fernandes behind him, the creative Paul Pogba on the right, and speedy winger Mason Greenwood on the left. Not much has changed so far. Solskjaer has employed the same tactics but with different personnel. Pogba has played as a deep-lying midfielder again, with Jadon Sancho joining Fernandes and Greenwood. Ronaldo has replaced Cavani up top.

At Manchester United, Ronaldo can poach goals with Fernandes drifting to his right to provide assists. Ronaldo has adapted well so far this season as a lone center forward because he can create space when defenders often chase him and leave open pockets in the area. He’s also making things happen wherever he happens to be in the attacking third.

Ronaldo has scored three times in four Premier League appearances, making him the league’s Player of the Month for September. His arrival made the club he once played for into an instant contender for the league. They’re also among the sides that could compete for the Champions League. The question is whether Ronaldo can play with Cavani. That could potentially work in a 4-3-3 formation, but Manchester United is unlikely to use that system. It will be worth seeing if Solskjaer opts for it and whether a Ronaldo-Cavani partnership ever becomes a reality. Under such a formation, Fernandes would have to either sit or move further back into midfield.

It’s an understatement, but Messi and Ronaldo give their coaches options. Tactically, options are good. A long season brings with it injuries and the need to use many players. That said, teams thrive on a system that works. Both PSG and Manchester United are off to very good starts, but there is still plenty to prove en route to the Champions League knockout rounds.