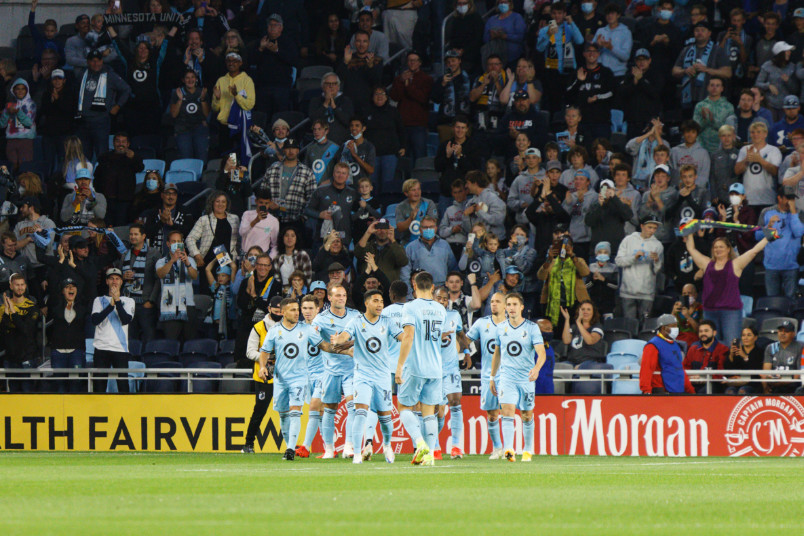 By Jason Davis – WASHINGTON, DC (Oct 8, 2021) US Soccer Players – The international break is normally a time for clubs to pause, collect themselves, and plan. These days, that’s usually the situation in Major League Soccer as well. The league is making more of an effort to ensure that its product isn’t negatively affected by call-ups and overshadowed by important international matches played around the world.

That’s not the case for a handful of MLS teams as the October international break arrives. That’s because while MLS does make an effort to clear its calendar for international games, it’s the clubs themselves that decide whether or not to play during the window.

MLS has a total of four games on its schedule this weekend. Three will take place on Saturday, in-between CONCACAF World Cup qualifiers, but on the same day as a host of games in Europe and elsewhere. One is on Sunday, the same day that the USMNT will take on Panama on another Octagonal matchday.

That Sunday tilt pits Minnesota United against the Colorado Rapids. Both teams are in playoff positions in the Western Conference, though the Loons’ situation is more precarious than the Rapids’. Colorado is one of the surprises this season, zeroing in on a home playoff game when the postseason starts in early November.

“We’ve actually missed those guys quite a few times this year,” Frasier said. “So we really feel like for us it’s business as usual. We have a lot of guys who are training hard and ready to go. It’s just a matter of who we actually select.”

They also thought they’d be without defender Lucas Esteves, sent off against the Sounders last Saturday. A closer look at the challenge shows that Esteves may have done nothing wrong. Despite instant replay supporting that view, VAR did not rescue the Rapids. MLS eventually did, rescinding the suspension.

Minnesota may have bigger complaints. The Loons will also be missing several key players away on international duty, including attacker Robin Lod and defender Romain Metanire and Michael Boxall. Still, the biggest loss is playmaker Emanuel Reynoso.

At FC Dallas, referee Rubiel Vazquez issued a red card to Reynoso in the 89th minute of a goalless draw following a video review of a stamp on FC Dallas winger Szabolcs Schon. The foul was more careless than dirty. Intent does not factor into the calculation, and Reynoso left the game early.

Minnesota appealed the red card to MLS as is the club’s right. The bar for reversal is quite high and clubs only get a limited number of challenges per season. Since those challenges don’t carry into the playoffs, United balanced the risk/reward and got rewarded. MLS lifted the red card suspension on Friday.

Without its national team players, Minnesota has issues on both ends of the field. Head coach Adrian Heath must find a way to score goals without two players who account for more than one-third of the club’s season total (11 of 30). He must also try to keep Colorado out of the net without half of his backline. Together, Metanire and Boxall have played more than 3700 minutes on the season. If the game is important and they are both healthy, Metanire and Boxall are in Minnesota’s lineup.

“Let’s talk about the players who are here and not the ones who aren’t,” Heath said following Thursday’s training. “There’s nothing we can do about that. We’re fully aware of what was going to happen a few weeks ago when we got the invitation letters from the federations. We knew who was going to be gone. That’s what it is. Next man up. Step up. Come and give us a problem next week because you played that well this weekend.”

On the attacking end of the field, Lod’s absence could force Heath to turn to Adrien Hunou. Brought in at midseason, Hunou has yet to see a lot of time in the center of the attack. Though Lod is a winger, Heath made him the point of the offense.

Hunou arrived in Minnesota carrying significant expectations. He scored his first goal in June as part of a 2-0 win over Austin FC, prompting Heath to talk up his potential to be a major part of the Loons’ attack moving forward. Hunou added three more goals between June and the middle of September, including a pair against the Houston Dynamo on August 28th. He hasn’t scored since, last starting in a 4-0 loss to Sporting Kansas City on September 15. Since then, Hunou’s only action has come off the bench.

Minnesota is a club not known for squad rotation. Heath’s tactics normally leave his starting eleven on the field as long as possible. United’s depth becomes a question simply because it doesn’t get used often enough. Losing 3-1 at DC ahead of the trip to Frisco means one point from their last two games. On paper, a draw at Dallas was a somewhat disappointing result due to the difference in their positions in the table. Closer to reality, road points are just too tough to come by in MLS for that to be called a bad draw. After all, it’s a point towards playoff qualification.

For Minnesota to lock in its playoff spot, road draws need home wins. The Loons have four games left at Allianz Field. With Vancouver closing in and LAFC within striking distance, all of them will feel like must-wins.

That means Sunday’s game is a big one. There will be no Lod, no Metanire, and no Boxall. Others will need to step up in their places. Getting the games in is part of the scenario right now, and risking alternative lineups may beat a compacted schedule. However, it’s a risk for both teams, which could add to the pressure when the season resumes in full next weekend.