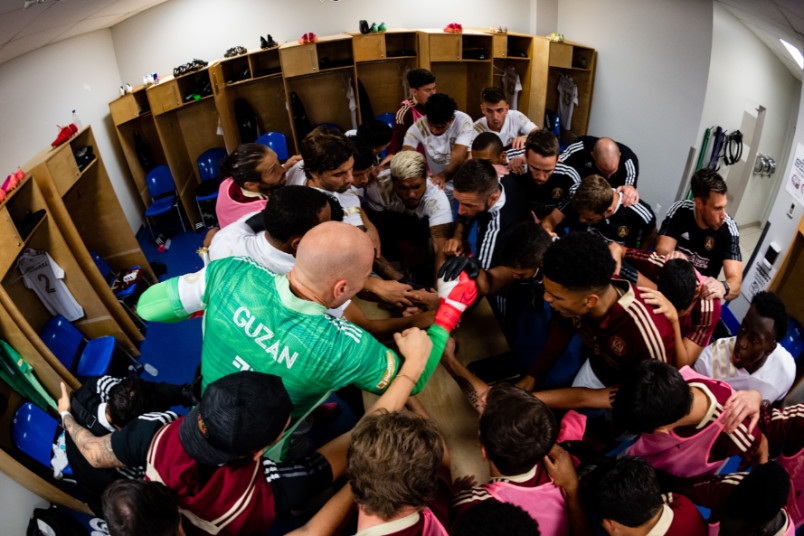 By Clemente Lisi – NEW YORK, NY (Oct 4, 2021) US Soccer Players – The start of fall brings with it cooler temperatures in most parts of the country. For MLS, things are just starting to heat up. It’s the time of year when teams ramp up to the playoffs, jockeying for points on the quest for the Supporters’ Shield or a higher place in the table. For teams just outside the top seven in each conference, it’s the time to make a last-ditch effort to reach the MLS Cup playoffs and embark on a postseason run that could even bring with it a championship.

The unpredictable nature of MLS remains one of the league’s assets. The uniquely North American concept of playoffs as the format with which MLS chooses to crown a winner is the other. The regular season can be a long slog, but October and November bring with it the laser-focus mission of trying to reach the knockout stage.

Since 2019, 14 teams qualify for the playoffs based on regular-season point totals. The top-seeded teams in each conference get a first-round bye. Not every team has that luxury. Many have had to endure injuries and players called up for international duty.

All this takes us to the bubble teams who still have a chance to finish seventh and get to play one more game this season. The 34-game regular season ends on November 7 with Decision Day. That’s the day that could very well decide the seedings, along with which teams qualify for the playoffs.

DC United, in fifth place at the moment, is arguably the most-improved MLS team of the year. They could very well surprise teams in the playoffs. Defending champions and Campeones Cup winners Columbus has disappointed in MLS play and are now languishing in 10th-place, six points out of a playoff spot. In the Western Conference, the Los Angeles Galaxy, currently sixth, looks like they will be in the postseason after missing out in 2020.

Below are three teams, all currently outside the top seven, who have a very good chance of sneaking into the postseason courtesy of a strong October.

United has endured plenty of tumult this season with coach Gabriel Heinze was fired over the summer. It was only a few years ago that we were all lauding how great this team was and that a dynasty was underway. A lot has changed since Tata Martino left to coach Mexico. Instead, we’re looking at a team that has lost too many close matches and could be outside the top seven once the season comes to an end.

Atlanta is currently in 8th-place with 39 points in the Eastern Conference following a 2-1 defeat to Montreal. That allowed the Canadian club, ninth going into this weekend, to leapfrog Atlanta in the standings. These are exactly the type of games Atlanta need to win. Instead, they drop points at a crucial juncture of the season.

There are, however, three bright spots that could see Atlanta reach the playoffs. Behind them by five points are the New York Red Bulls, a team that doesn’t look strong enough at the moment to contend for a postseason spot. The second is Atlanta’s schedule, including five out of six games against teams currently below them. Playing Toronto FC (twice), the Red Bulls, Inter Miami, and Cincinnati FC certainly puts them in a good spot. The third, and most obvious one, is having striker Josef Martinez healthy and scoring goals when it matters most over the next few weeks.

It’s been tough for all the league’s Canadian clubs forced by COVID-19 to play at neutral sites in the United States to minimize travel over the last two years. With Vancouver back at BC Place, the team has amassed an 8-4-2 home record that has them eighth in the Western Conference but still a contender for that seven-place finish. They’re doing it under interim coach Vanni Sartini who took over after a “parting of the ways” with Marc Dos Santos in late August.

On the road, the team has been a disaster, posting a 1-4-8 record. The Whitecaps travel to Seattle this coming Saturday to take on the Sounders. Calling that a “must win” stretches credulity with Seattle the strongest club in the Western Conference. Still, it’s a crucial three points in order to keep pace with 7th-place Minnesota United. Vancouver, at 37 points, is just one point below Minnesota with seven games left to play. Only three of those matches are at home.

Striker Brian White, who moved to Vancouver from the Red Bulls in June, has been an asset. He has recorded nine goals and an assist since joining the Whitecaps, including a hat trick this past Saturday in a 3-0 win against the San Jose Earthquakes. Should White replicate his form over the coming weeks, the Whitecaps have a serious shot at getting over that line and into the playoffs.

While the Galaxy looks strong to make the playoffs, crosstown rival Los Angeles FC not so much. Yes, a 1-1 draw in the final regular-season El Trafico on Sunday night was a good result, but it may not be enough for a team that has lost too many key pieces along the way this season.

Currently ninth in the Western Conference, LAFC loaned out striker Diego Rossi to Fenerbache at the start of September. Since then, they have gone 3-3-1 and haven’t won a match since defeating Austin 2-1 on September 15 on the road. Long droughts like that won’t get them into the playoffs.

LAFC would miss the playoffs for the first time should they fail to finish in the top seven. Even with Rossi in the lineup, this was a team that created lots of chances but often failed to score. 40 goals in 34 games is hardly the type of stat that characterizes a strong offense. It highlights their dependence on striker Carlos Vela, injured for long stretches and only playing in half of their games.

Like Atlanta and Vancouver, LAFC will need more consistent performances from its attack. Getting the offense in sync and keeping it there would’ve helped at any point across the schedule, but now it’s key. That’s what will win the games that have to count as the regular season pushes toward its end. Given how close the tables are in both conferences, that could mean a Decision Day that’s well worth watching.