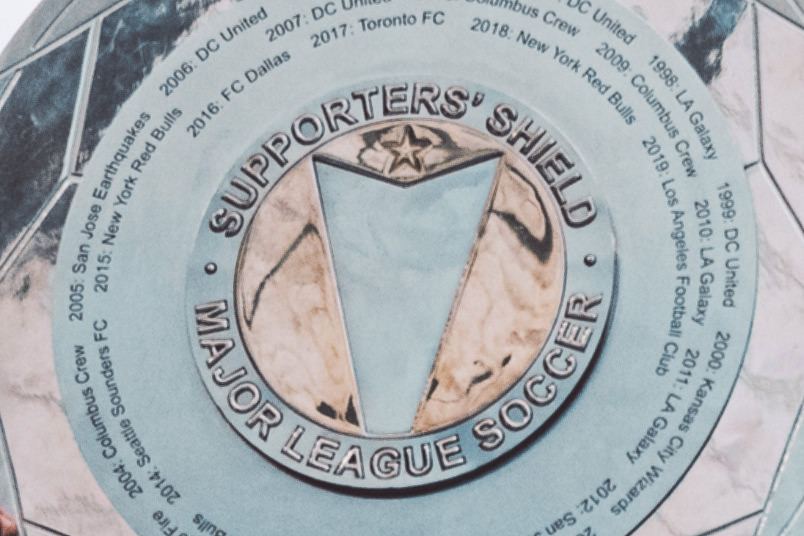 By Jason Davis – WASHINGTON, DC (Oct 15, 2021) US Soccer Players – The New England Revolution is chasing history. With five games left on its 34-game Major League Soccer regular-season schedule, the Revs are just five points shy of breaking the 2019 LAFC record for most points in a season.

Whether New England breaks the record or not, the club is a near-lock to win the 2021 Supporters’ Shield. That trophy matters more to some clubs than others, though it never carries the same weight as the MLS Cup championship in any given season. It’s nice to finish first, but no points champion receives the same plaudits as the team lifting the gaudy silver cup at the end of the knockout tournament.

The Supporters’ Shield can also be something of a poisoned plate. Rarely does the best team throughout the regular season also claim the playoff championship. Those that do are among the greatest teams in MLS history.

Despite the league’s push to come more in line with the rest of the world via the transfer market and international influence, soccer in the United States and Canada still hews to the traditional North American sports model. There’s a regular season that qualifies teams for the playoffs. It’s that tournament that decides the champion. While every major European competition crowns its champions based on the full season record, MLS holds on to its American-style process.

That feature of American sports culture is why Revolution head coach Bruce Arena downplayed the Supporters’ Shield in recent comments about his team’s goals in 2021. A Shield would be New England’s first MLS trophy in its 26 season history, but Arena knows that the Supporters’ Shield is just a door prize on the way to the big one.

Arena’s hiring was about winning an MLS Cup. If the club lifts the Supporters’ Shield, that will be a nice bonus. Considering just how good the Revs have been this season, anything but the top prize would be a letdown.

Great MLS teams as measured by points earned, goals scored, goal difference, and a host of other metrics have come up short of the championship. The club that New England is chasing for the all-time regular season points record, 2019 LAFC, had its bid for a double haul of silverware ended by the Sounders in that year’s Western Conference final.

When the stakes are at their highest in the postseason, the regular season results no longer matter. In a one-off clash, even great teams can lose to an opponent with a solid plan and the talent to execute it.

This is MLS, after all, and the margins between teams are small. LAFC’s 2019 season was remarkable in the context of a league driven by parity and the controls in place to ensure it. That Bob Bradley’s team not only won games but did it with consistently big margins set it apart. In most single-table first division leagues, where budgets are solely at club discretion, and there’s no need to prepare for the playoffs, LAFC’s campaign would be fairly humdrum.

It might be a sign of parity slipping ever so slightly that four of the highest season point totals in history have come in the last four seasons. LAFC’s record bettered the New York Red Bulls’ point total from the previous season by a single point. Atlanta United missed out on the Supporters’ Shield because of New York’s excellence but still managed to collect the same number of points as the 2017 Supporters’ Shield-winning Toronto FC team (69).

If New England breaks LAFC’s 2019 total, that will mean the points record has changed hands four times in the five seasons since Toronto went past the 1998 LA Galaxy number of 68, a mark set when shootouts broke ties. Of that group, only Atlanta United and Toronto finished the year with an MLS Cup title, and Atlanta didn’t win the Supporters’ Shield in 2018.

With any other head coach, Revs fans would have reason to worry that a points title might mean disappointment come playoffs. New England has Arena at the helm. Arena’s litany of accomplishments in MLS includes three Supporters’ Shields, two of which preceded MLS Cup titles.

Arena’s last Supporters’ Shield season came in 2011 with the LA Galaxy. That LA team boasted Landon Donovan, David Beckham, and Robbie Keane as its key attackers along with top MLS players like Todd Dunivant, Omar Gonzalez, Mike Magee, and Juninho. The wealth of talent, which, to be fair, is more evident in retrospect than it was at the time, elevated the Galaxy above the rest of MLS.

The Galaxy benefited from the home-field advantage in the final that season even though the (then) Home Depot Center was technically a neutral venue. MLS moved to holding the MLS Cup final in the home of the highest point-earner the following season. That conceivably increased the value of the Supporters’ Shield. Win the points title, and you’re guaranteed to host every playoff game you play all the way to the final.

With the playoff format now consisting of only one-off matches, that advantage is more important than ever. The home-away split in MLS ranks among the highest in the world. Almost nowhere in soccer is the benefit of playing at home more pronounced than in MLS. Arena certainly knows that, despite his public disgust for “data.”

“It’s not a goal of ours, but if it falls into place that’s great,” Arena said of the points record. “But the goal of ours has been to quality for the playoffs, to get a home-field advantage. And at that point, it was to try to finish first. Now, we’re well aware of the fact that we’re in a race for the Supporters’ Shield and we’ll be conscious of that fact. But it’s not what drives us every day. The ultimate goal is being prepared for the playoffs. So that’s what our focus is right now.”

The focus for the Revs is on the MLS Cup trophy. They won’t say no to the Supporters’ Shield, but it’s not what anyone in MLS is playing for.