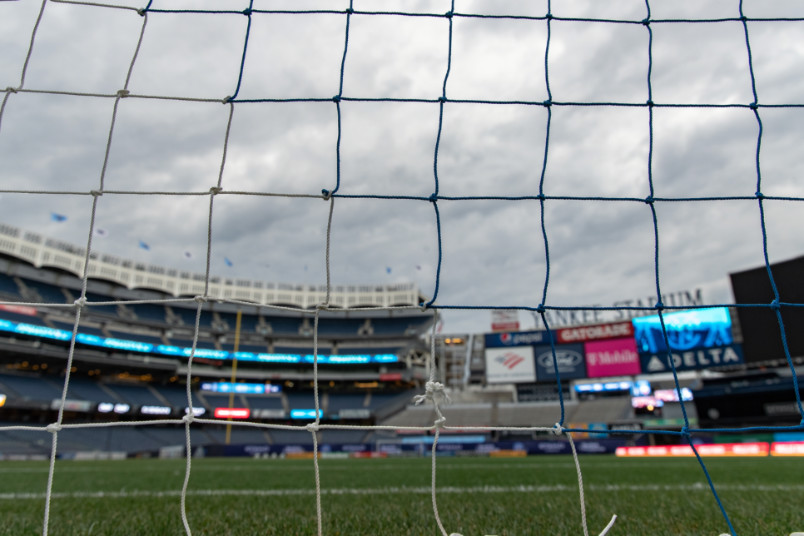 By Jason Davis – WASHINGTON, DC (Oct 20, 2021) US Soccer Players – Things have mostly gone back to normal around Major League Soccer. “Normal” in the sense that teams have all returned to their home markets, stadiums are mostly open to as many fans as care to show up, and the soccer is largely the focus again.

With the return to normalcy comes a belief that the results on the field are a fair reflection of the quality of the teams. The best teams in the league must obviously be the ones at the top of the standings, while the worst teams languish at the bottom. It’s simple logic.

Unfortunately, soccer doesn’t always work that way. The best teams in terms of talent and coaching tend to rise to the top, but that’s never a universal truth. This is a cruel game, one with margins so small that matches—and seasons—can turn on a single moment.

Things aren’t exactly normal for New York City Football Club. But, perhaps that word has never really applied to the club in the country’s biggest city. The MLS gambit in New York City was another example of simple logic. A team located within the five boroughs would capture the attention of the metropolitan area and the rest of the world. That included putting pressure on city leaders to help with a plan for a proper soccer stadium.

Maybe there’s progress behind the scenes, but publicly the stadium remains a significant issue. Any time reporting indicates that a plan might be coalescing, it takes great pains to point out the many steps that remain before a shovel could hit the ground. Yankee Stadium belongs to a different team, with the soccer club needing to workaround the baseball schedule.

Eight times this season, NYCFC has had to cross the river and play at the home of its biggest rivals. As fun as it might be to remind the New York Red Bulls that they play in New Jersey, NYCFC ended up with a similar issue of geography. Red Bull Arena is an excellent soccer stadium that nevertheless does not belong to NYCFC.

Such is the interminable quest to build a soccer stadium for NYCFC. Fans frustrated by the protracted process can’t be happy about more than half of their season tickets ending up for games at Red Bull Arena. The wandering nature of NYCFC, back-and-forth across the Hudson like early explorers charting the region, makes it tougher to judge the club’s season.

NYCFC moves into week 31 in 8th-place in the Eastern Conference, a point outside of the playoff spots. The numbers say that NYCFC is either unlucky, wasteful, or a little bit of both. Eighth hardly seems a fair place for a team as good as NYCFC sometimes looks to be.

The gap between NYCFC’s goal total and the number that the advanced statistics say they should have is only a fraction short of seven. Spaced out over a campaign, however, those seven additional goals would be the difference between a draw and a win or a draw and a loss. Put in the right places, those seven goals would have Deila’s team comfortably in the playoff places, perhaps even challenging for a top seed.

Following a 1-0 loss to the Red Bulls on Sunday, NYCFC has just one win in its last nine matches, with the lone victory coming against lowly FC Cincinnati back on September 18. That nine-game span includes two one-goal losses to the Red Bulls, a loss against the Fire, and a 3-3 draw against FC Dallas.

It’s not just the tough games against other playoff contenders that are tripping up NYCFC. Matches against the lesser lights have failed to deliver points and contributed directly to the club’s slide down the Eastern Conference standings. Deila is preaching team spirit in the face of potential disaster.

“First of all, you have to believe, it’s the most important thing. That everyone stays together, we know how good we can be when we are at our best,” he said after the Hudson River Derby loss. “I know our level when we are good and we saw it against Nashville. Today, we fought, we stayed together, we never gave up, we tried until the end, so I can’t say anything about attitude. Try to do the best job as possible but we need to fight even harder and believe, even more, work on details to get the small margins for us instead of against us.”

Delia may be right about fight and attitude, considering the circumstances. The former Celtic manager’s team was playing some of the most effective run-of-play soccer in MLS before the recent results. What was more about bad luck than poor play is now a combination of the two, and it is threatening to tank the campaign.

Against the Red Bulls, NYCFC created very few clear-cut chances. Red Bulls goalkeeper Carlos made two saves, but only one required anything notable. The blue side of New York has gone ice cold at exactly the wrong time. They enter the Atlanta game with a 400-plus minute goalless streak.

NYCFC’s roster is talented from front to back. Even if there’s some bad luck involved, missing the playoffs would be a significant disappointment.

It’s hard to know how much of NYCFC’s yo-yo act between Yankee Stadium and Red Bull Arena has affected its season. With three of the club’s final four games in the baseball stadium in the Bronx, we’ll find out if some consistency will make the difference. It’s not a perfect home for a soccer team, but it is their home. In the still not-so-normal times for NYCFC, they have to make that count.