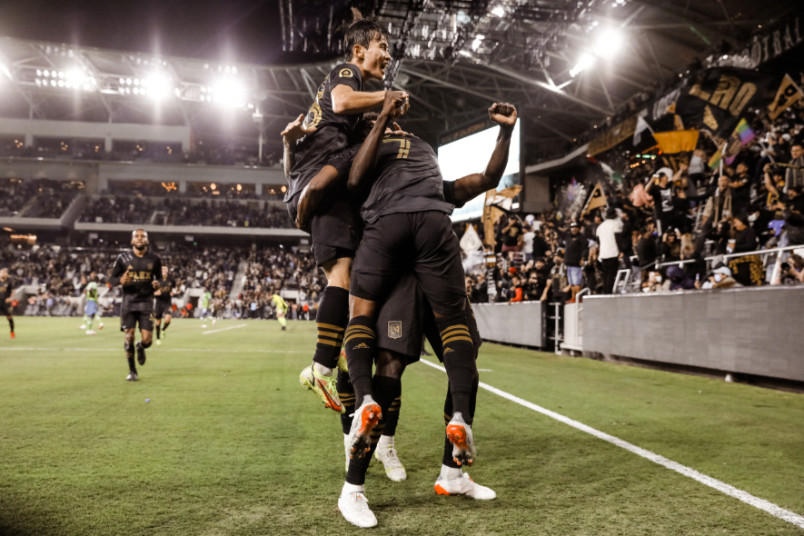 Wednesday’s soccer news starts with Seattle dropping three more points at the top of the Western Conference. A trip to Banc of California Stadium ended with LAFC winning 3-0. Brian Rodriguez opened the scoring in the 21st minute and Latif Blessing doubled the lead in first-half stoppage time. Cristian Arango finished off the goals in the 51st minute. LAFC goalkeeper Jamal Blackman made five saves to keep the clean sheet.

“We’ve been a team that throughout most of the year has been hard to play against, and yet, we still, even though we don’t give up many chances, we still give up some big ones,” LAFC coach Bob Bradley said. “A lot of them come on first-time chances where both get played in and we just lost someone. You know, I think that that part is something where we have to continue to improve.But tonight is a good effort in the moments where we slipped a little bit.”

The result has 2nd-place Sporting Kansas City and 3rd-place Colorado within three points of the top of the table. Sporting hosts the LA Galaxy tonight while Colorado is at New England. Both could pull into a tie for first-place, with the tiebreaker scenario favoring Sporting.

“There is no positive spin on this, I’m livid actually.” Seattle coach Brian Schmetzer said. “There are some things that are non-negotiables at this club, and we didn’t do a lot of things well in that first-half.”

Seattle and the LA Galaxy meet at Lumen Field in a rare Monday night MLS game. The Galaxy is now in a position to significantly disrupt the top of the table.

Moving to the scores in Europe, Luca de la Torre’s Heracles beat ASWH 3-1 at home in the opening round of the KNVB Beker. Rai Vloet scored in the 32nd and an own-goal doubling the lead in the 87th. Torre’s assisted on Vloet’s goal four minutes into stoppage time. In Serie A, Gianluca Busio’s Venezia lost 2-1 at home to Salernitana. Venezia took the lead in the 14th minute from a Mattia Aramu goal. Salernitana equalized in the 61st. Playing a man up from a 67th minute red card to Venezia’s Ethan Ampadu, Salernitana scored again five minutes into stoppage time. Tanner Tessmann was on the bench for Venezia. Matt Miazga was on the bench for Alaves in their 1-0 home shutout of Elche in La Liga. Mamadou Loum scored in the 47th minute.

Chris Richards’s Hoffenheim beat Holstein Kiel 5-1 at home in the DFB Pokal. Own-goals in the 3rd and 31st minutes had Hoffenheim up 2-0 when Holstein Kiel scored in the 47th. Angelo Stiller made it 3-2 Hoffenheim in the 59th. Mu’nas Dabbur (72nd) and Jacob Larsen (84th) finished off the scoring. Tyler Adams’s RB Leipzig beat Babelsburg 1-0 away. Dominik Szoboszlai scored in the 45th minute. Gio Reyna wasn’t in the squad for Borussia Dortmund’s 2-0 home win over Ingolstadt. Thorgan Hazard scored in the 72nd and 81st minutes.

Lynden Gooch subbed out in the 65th minute of Sunderland’s 0-0 draw at QPR in the League Cup, advancing 3-1 on penalties. Gooch saw yellow in the 39th minute. Christian Pulisic wasn’t in the squad for Chelsea’s 1-1 home draw with Southampton. Chelsea moves on to the fifth round 4-3 on penalties. Kai Havetz put Chelsea up in the 44th and Southampton equalized in the 47th.